Mama, Don’t Let Your Teens Grow Up to Be Pirates 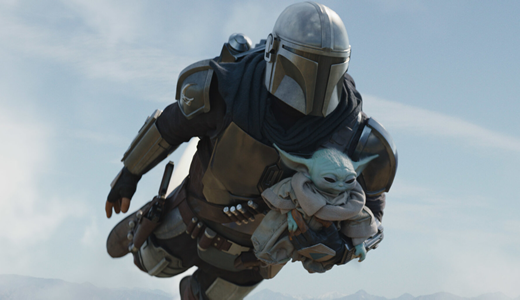 In our fractured, streaming-saturated age, it’s hard to say what’s the most popular show on television. But the most pirated? That’s easy.

According to TorrentFreak, Disney+’s The Mandalorian was the year’s most pirated television series, unseating perennial champ Game of Thrones(which ended its eight-season run in 2019). The Mando and Baby Yoda show was followed by Amazon Prime’s superhero deconstruction The Boys and HBO’s salacious sci-fi series Westworld. Vikings, another Amazon Prime show landed in fourth place, while CBSAA’s Star Trek: Picard was fifth.

TorrentFreak generates its annual list based on traffic data from BitTorrent, a protocol which essentially allows users to share data over the internet. Because it’s not centralized, it’s a super-popular way for people to share entertainment—often allowing people to download movies and shows they’d rather not pay for.

It’s telling that the list is filled with,well, expensive shows. All of them hail from streaming services or premium networks. It’s telling, perhaps, that Netflix didn’t land a show in the top echelon of pirated shows: With 190 million subscribers, Netflix is streaming’s top dog. Perhaps many households can pony up the $9-16 monthly subscription charge for Netflix, but they are reluctant to dish out more for another streaming service.

The pirated shows are also among pop culture’s buzziest offerings … and, in some cases, the most problematic. While Plugged In has praised The Mandalorian, you’re not going to find the rest of those series’ on one of our “best of” lists anytime soon.

And for moms and dads who associate “torrent” with (as Webster says) a “fast moving stream” and wonder why they should care about digital piracy, here’s why: Many of the people pirating such shows are kids and teens. While hard numbers of the percentage of teens who pirate are hard to come by, there’s no question they’re often some of the most avid content thieves out there. A look farther down the piracy chart—where such teen-centric shows as The Flash, Arrow and Rick and Morty are represented—suggests as much.

“I live on the internet,” one Australian teen was quoted as part of a study cited in Education Technology Solutions. “Almost daily I talk, text, watch movies and download everything I can for free.”

Many teens don’t think there’s really anything wrong with piracy—that it’s not really hurting anyone. But, of course, they’d be wrong. A study from the U.S. Chamber of Commerce’s Global Innovation Policy Center said last year that the U.S. film and TV industry loses at least $29.2 billion every year due to piracy, with that number perhaps being much, much higher: $71 billion, according to some. Anywhere from 230,000 to 560,000 jobs were lost because of it.

Even if you doubt the numbers, let’s not forget that piracy is, technically, stealing. Pirates take a product that cost quite a bit of money to make and don’t giving anything in return for it. It’s not like the Bible says, “Thou shalt not steal, unless it feels like it’s not hurting anybody too much and you’ve got a snappy broadband connection.”

And then, of course, there’s the issue of what’s being pirated. As mentioned, some of the most popular pirated shows are also among the most problematic. The Boys and Westworld are extraordinarily violent, and I don’t know if I’ve ever heard as many f-words on television as I did when reviewing The Boys. For some teens, piracy isn’t just getting a show for free: It can be a way to work around any parental checks on their watching habits, too.

So parents, be vigilant. Talk with your kids about piracy. Make sure they understand that pirating copyrighted materials is both wrong and illegal. And if they start wearing eyepatches and say “me hearty” a lot, you might want to speed up the discussion.