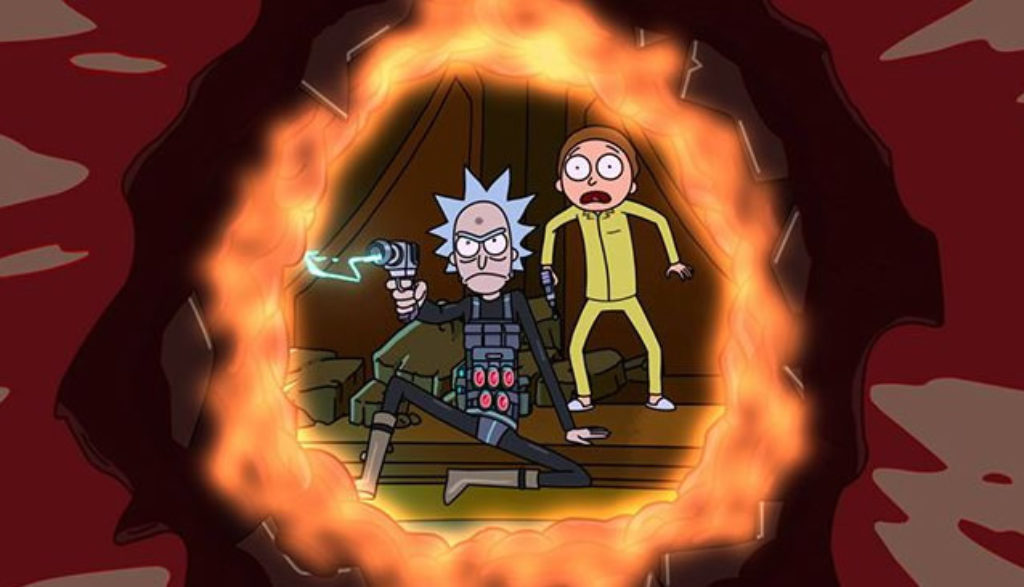 Grandfathers are supposed to be wise, genial figures in their grandchildren’s lives—perhaps someone who teaches the youngsters how to fish, shares the joy of old movies and, of course, tells interminably long stories.

But not all grandfathers fit that template. Some are less wise and genial and more brilliant and sociopathic.

Take Rick Sanchez, for instance. After having been gone—like, really gone—for a couple of decades, the old man with the blue pointy hair suddenly shows up on daughter Beth’s doorstep and moves in. It’s obvious to everyone that he’s not exactly, um, right, if you know what I mean. But perhaps that’s simply a side effect of his adventures—courtesy of a portal-creating gun— through an unfolding and chaotic multiverse.

But nihilistic dystopian adventures are no fun without a little company. While Beth is largely oblivious to Rick’s sci-fi shenanigans, her children—high-strung 14-year-old Morty and his rebellious, world weary older sister, Summer—are all too familiar with them. Morty has been a party to pert near every one of Grandpa Rick’s misadventures, and Summer is increasingly well traveled herself.

But if travel is supposed to expand one’s mind in most case, Rick’s interdimensional hopping seems to be imploding on itself.

This is not to say that the show isn’t clever, or well written, or even funny. It can be. But it can also be incredibly bleak and dark and problematic and troubling. And Rick is … how do we put this gently … a big ol’ jerk.

It’s not my opinion. He’s supposed to be a jerk. The show has given Morty’s blue-haired grandpa symptoms of pretty much every misanthropic malady and psychotic tic known to humankind.

“Now, listen,” he tells Morty and Summer during an all-too-typical heart-to-heart talk, “I know the two of you are very different from each other in a lot of ways, but you have to understand that as far as Grandpa’s concerned, you’re both pieces of (bleep)! Yeah. I can prove it mathematically.”

Grandpa Rick has little regard for family, given that the infinite multiverse contains more family members than he can possibly count. He calls marriage “funerals with cake,” and cares not a whit when his daughter, Beth, and her husband, Jerry, split up.

And Rick’s bleak worldview permeates the entire show. Even Morty, a more sympathetic character who seems to truly care for those around him, is infected by his grandfather’s godless, existential nihilism. “Nobody exists on purpose,” Morty tells his sister. “Nobody belongs anywhere, everybody’s going to die. Come watch TV.”

Sometimes the show hints at something akin to a heart, but let’s face it: In terms of its worldview, Rick and Morty is The Simpsons as written by Nietzshe, shortly after he went insane.

But even if Rick and Morty had all the glowing positivity of Mr. Rogers’ Neighborhood, the content would still be enough to make it superlatively problematic.

On any given episode, animated characters may have their arms ripped off or their heads smashed in or, perhaps, have their heads smashed in with their own ripped-off arms. Animated blood falls like rain in Seattle. And Rick and Morty’s not above showing a little animated skin, either. Or a lot. Or even sexual interludes. In the second episode of season three, which I reviewed, Summer—remember, Morty’s live-at-home teen sister—gets into an apparently sexual, cohabitational relationship with a leather-wearing, buttocks-exposing dystopian gangland leader.

The show is rated TV-14, but it really gets that by way of technicality. Some bad language (f-words and s-words, mostly) is bleeped on Cartoon Network’s late-night Adult Swim block of programming, but it’s pretty obvious from the context what those words are.

I’d like to say it’s a shame Rick and Morty didn’t throttle back on its content a little—that, if it had done so, the show would be much better. But that would be a lie. This is the sort of show where gratuitous content, shock and nihilism are all a part of the point—a chunk of its “charm,” if you will. It’s not a series that can be cleaned up with a censoring service or judicious use of a fast-forward button. The real shame is that the show’s kinda funny … and that it’s still so bad.

Summer and Morty are dealing with their parents’ impending divorce in different but equally unhealthy ways. So they find themselves grappling with their feelings by beaming with Rick to a Mad Max-like dystopia. Once there, Rick’s determined to take a valuable mineral; Summer falls for a bucket-wearing (and not much else) gang leader; and Morty is given a massive, sentient arm.

Morty’s new arm kills and dismembers a variety of victims in increasingly grotesque ways. (Brains are smashed. Eyeballs fly. Etc.) Turns out the arm is on a quest to find and kill the culprits who murdered his family (when he was more than just an arm). He does find them and kill most of them, pushing the man who ordered the murder under water. But after the arm unexpectedly vanishes, the man is still alive, so Rick forces Morty to finish the job. (“See, Morty, now we’re both accountable,” he tells his grandson.)

Meanwhile, Summer makes out with the gang leader (who, for most of the episode, wears only an S&M-like harness/loin covering that exposes his bare backside). They kiss and move around on a table. Three weeks later, it appears they’re living together, acting like an old married couple. (“I can assume you haven’t murdered a single person today!” Summer henpecks.)

The gang holds a glowing rock in high honor: Summer’s beau says they keep it “to remind us that there are no gods.” Rick insists that without family, “you’re just an inert chunk of randomly assembled molecules driving wherever the universe blows you.” He makes a disparaging remark about a “Christian army.”

Dozens of animated extras are killed in sometimes horrific ways. Someone begs for Summer to kill him. “OK, but not because you told me to,” she says, shooting his head with a shotgun. Human body parts are served in a makeshift cafeteria. There’s reference to “flesh leather” and someone greasing someone else’s genitals. Summer spits alcohol from a flask into a car to make it run faster. People drink wine. Summer visits her father, Jerry, who lives in a hotel where she spies “lots of hookers.” loitering outside.

Characters seem to utter the f-word about a dozen times and the s-word thrice (censored on the Adult Swim website). We also hear “a–,” “b–ch,” “d–n,” “h—” and “p—ies.” God’s name is misused about five times, twice with the word “d–n” (and partially censored). Jesus’ name is abused three times, with other instances of “jeez” thrown in, too.