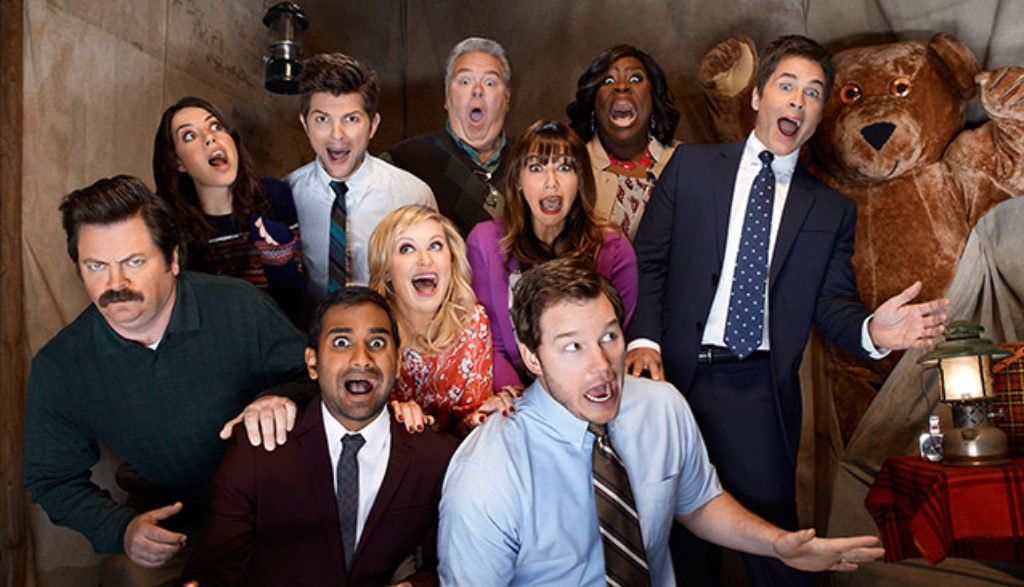 For years Leslie Knope has labored as a small-town, mid-level bureaucrat in the Parks and Recreation department of Pawnee, Ind. It’s a lowly station for one who once held hopes of becoming the country’s first female president. But does that dampen her enthusiasm? Hardly. She’s as buoyant as a Ping-Pong ball, as dedicated as the plaque in City Hall. At a time when most of us have come to believe politicians aren’t any better than the slob on the street—and in many cases are so much worse—Leslie’s a preternaturally peppy politician who really seems to believe this whole “public service” shtick, and she attacks her work with the sort of gleeful zeal most folks reserve for bacon and Girl Scout cookies.

And even as we trundle through the seventh and presumably last season of NBC’s critically acclaimed but little-watched sitcom Parks and Recreation, Leslie has lost none of her pluck and drive—just as those around her are still their charming, curmudgeonly selves (never minding that Gary has been known as Jerry, Larry and Terry at various times along the way).

The final season takes place three years in the future. Leslie’s now the Midwest Regional Parks Director, poaching several employees from the Pawnee pool. Ron, her old mustachioed boss, now owns a construction company, and Tom’s a business mogul. About the only person in the same job is Ben, still working as Pawnee’s city manager.

Parks and Recreation, like The Office and Modern Family, was largely set up as a mockumentary, with conscientious cameramen stalking characters both in and out of the office. It’s a pretty familiar trope by now, but Parks and Rec—after a rocky start—mastered it.

It’s also managed to capture a vibe that’s all too absent in most of its peers: niceness. Really. When the sitcom first came out in 2009, its heart seemed less certain. As I wrote of Leslie then, “Perhaps it says something about our cynical culture that such a character—a politically innocent ideologue—is also the show’s primary punch line.” We still laugh at Leslie. But we’re encouraged to root for her too. Sure, she reminds us of those kids in algebra class who always sat in the front row and were perpetually raising their hands. But while Michael, the boss from The Office, drives his underlings nuts because he wants to be liked so very, very badly, Leslie just wants to make Pawnee a better place to live. Her focus on others, rather than Michael’s focus on self, makes all the difference here: Leslie means well, however that manifests itself. And we can’t help but like her for it.

And come to think of it, most of her workmates have good qualities as well. Ron, a red-state caricature in some ways, also can be the show’s voice of reason. Andy is as single-minded and kind-hearted a fellow as you’re likely to meet. The city of Pawnee (motto: “First in Friendship, Fourth in Obesity”) seems to be full of folks with oversized eccentricities … and generous hearts.

Nancy DeWolf Smith of The Wall Street Journal wrote, “The sentiments [Parks and Rec] ultimately evokes—kindness, fairness and the pursuit of happiness even in the face of frustration—are pretty close to the ones in those Foundation for a Better Life ads. Better yet, Parks exudes charm without the self-awareness or coy preachiness of Glee. It consistently pokes fun at our culture and foibles in ways that are clever and sometimes sharp but never mean.”

That’s not to say that Parks and Rec doesn’t have problems. It has loads of them, from crass sexual jokes to drug-themed story arcs to some rough language. “I passed up a gay Halloween party to be here,” Leslie tells us in a Season 2 episode, for instance. “Do you know how much fun gay Halloween parties are? Last year I saw three Jonas Brothers make out with three Robert Pattinsons.”

So Parks and Recreation, in the end, as it ends, is much like its characters. It means well, but it can’t seem to stop undercutting its own good intentions.

With Leslie and Ron now bitter enemies, the rest of Pawnee’s old Parks and Recreation division elect to lock the two of them in their old offices all night, giving them 10 hours to work out their differences. Thus, we finally learn something about what issues drove a wedge between these two “work proximity associates.” We also see them share a bottle of whiskey—leaving them both snockered by morning.

There’s lots of talk about lying—not all of it bad. Several characters threaten to cause severe injury to themselves or others. Ron utters a (bleeped) obscenity, and we fully hear “d–n” (three or four times) and “h—” (once or twice). God’s name is misused as many as eight times. Ron and Leslie conspire to mimic a gaseous noise with a saxophone.

Leslie, Tom and budget expert Ben Wyatt hit Pawnee’s media in an effort to drum up interest in the upcoming Harvest Festival. First stop: the morning radio show of “Crazy Ira and the Douche,” two shock jocks who fill their routine with sexual innuendo and flatulent sound effects. During the interview, they (and we) learn that Ben bankrupted a town when he was an 18-year-old mayor—and that he can’t speak into a microphone to save his life.

Now the center of a scandal, Ben makes embarrassing statements at every turn. Comments about gays. Recollections of how he “felt up” a girl when he was in high school. But Leslie comes alongside him, and he eventually redeems himself.

Jokes revolve around obesity, “colleagues with benefits” and abducting teens. A child hits Andy in the nether regions with a toy bat. We hear references to Fung Shui and the book The Secret, and two people engage in a suggestive exercise pose. Characters say “b‑‑ch,” “butthole” and misuse God’s name several times.

Leslie, trying to breach a governmental beer-drinking “boys club,” cracks open a gift basket full of wine and passes it around to her testosterone-endowed brethren. The next morning, she wakes up feeling awful—not from a hangover, but from thinking about the fact that the gift basket, by law, should’ve been sent back. Leslie’s pulled in front of a disciplinary committee, and Ron defends her. “Leslie has never broken a rule in her life, to the point where it’s annoying,” he says.

Leslie proves to be a surprisingly likable character, but much of the episode’s good points are undermined. It begins with a poop fight. Foul language includes misuses of God’s name and a reference to “b‑‑ch.” We see one character hobble down a residential street altogether naked. (His rear is pixelated when the camera’s behind him, his groin is covered with a black circle when it’s in front.) Bikini-clad women pop up on a computer screen, and there’s talk of getting “gently laid tonight.” We learn that an underage intern has posted a video of herself drinking the illicit wine on the Internet.