What’s New and Streaming For Families for April 2021 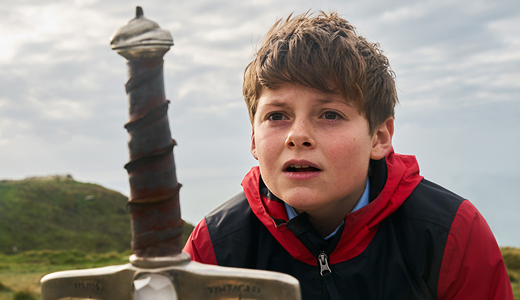 April is known for springtime and new beginnings. It’s also known for a certain day mid-month when Uncle Sam starts rolling up his sleeves to check the books. But your tax-focused deadlines are pushed back to May this year, so you can focus on April sunshine and budding flowers and … hey, a family friendly movie or two wouldn’t be bad either.

So, let’s take a gander at some spring-fresh fare that’s coming to a streaming service near you.

The Time Traveler’s Wife (PG-13, 2009): This is the story of a Chicago librarian who suffers from a rare genetic disorder that causes him to drift uncontrollably back and forth through time. It’s a film that’s more Mom and Dad-focused than many on this list because there’s a little language and some husband and-wife sensuality in the mix. But as our Adam Holz put it: “It’s a love story, pure and simple.”

Escape From Planet Earth (PG, 2013): This kid’s pic takes a look at the mysterious Area 51from the space alien’s perspective. OK, as our Paul Asay noted in his review, this animated movie isn’t destined to be a classic. There’s slapstick humor and some gross-out gags. But we get “some feel-good family stuff here,” too.

My Fair Lady (1964): If you’re looking for a classic—as in classic musical from the mid-60s—this is it. Audrey Hepburn headlines this movie about a Cockney working-class girl who’s approached by a pompous phonetics professor. And they set off to transform her into someone who can pass for a cultured member of high society.

Master and Commander: The Far Side of the World (PG-13, 2003): In 1805, aboard the H.M.S. Surprise, the brash Captain Jack Aubrey is ordered to hunt down and capture a powerful French vessel off the South American coast. Plugged In reviewer Steve Isaac noted that this film is all high-seas gritty adventure that “provides vivid glimpses of what life might have been like for naval officers 200 years ago.” Of course, that also includes high-seas perils and some raging battle scenes.

Napoleon Dynamite (PG, 2004): It’s the story of an awkward teen in Preston, Idaho, who has a hard time fitting in. This quirky comedy takes geek chic to a whole new level. But our Adam Holz liked this film quite a bit. “It doesn’t, however, exalt geekiness as much as it lauds the idea of being who you are. In the words of the movie’s tagline, ‘He’s out to prove he’s got nothing to prove.’”

The Man Who Shot Liberty Valance (1962): Here’s another classic film, this one a Western starring Jimmy Stewart, John Wayne and Lee Marvin. In this pic a courage-challenged lawyer gets dubbed as a hero for something he didn’t do.

Night at the Museum (PG, 2006): You don’t always think of comedian Ben Stiller and “family-friendly” in the same sentence, but they work well together here. Stiller plays a hapless night watchman at a museum of natural history who needs to save the day in the face of magical happenings and exhibits coming to life. It’s a pretty fun romp that our Steve Isaac lauded for its lack of negative content (“very few objectionable words, no sexual jokes, no smoking, no drinking, very mild violence”), suggesting that parents and families will enjoy all it has on display.

Night at the Museum: Battle of the Smithsonian (PG, 2009): Former museum night guard Larry has to run off to the Smithsonian to keep four of history’s greatest villains from taking over when the exhibits, once again, start coming to life. This romp through history and a museum’s darkened halls is loads of fun. And as our Adam Holz put it, “Spending an evening in this Museum ultimately reminds us how important ‘old-fashioned’ values really are.”

The Kid Who Would Be King (PG, 2019): Old-school magic meets the modern world when young Alex stumbles upon the mythical sword Excalibur, and has to save mankind from the evil clutches of the wicked enchantress Morgana. The magic side of things can be a little creepy here with demon-like knights crawling up out of their Earthy graves. But as I mentioned in my review, “Ultimately, this kids pic stands strong, trumpeting solid lessons about unity, friendship and courage in the face of wicked malice. It states that when men’s hearts grow hollow, when they have no purpose to cling to, no righteousness to claim, that’s when evil prevails. Who’s gonna sneer at an Arthurian life lesson like that?”

Evan Almighty (PG, 2007): Newscaster Evan Baxter leaves Buffalo behind when he wins a seat in the U.S. Congress. But then God throws a task of biblical proportions at him: Evan must build a huge ark for a coming Washington. D.C.. storm. “We always thought it would be fun to make different chapters in a God series rather than just make a straight sequel to Bruce Almighty,” said director Tom Shadyac. “It always felt more fruitful, creatively, to spin off different characters. Steve [Carell] did such an amazing job in [the first film]; everybody remembers his scenes.” And so we end up with a sequel that many liked even more than the blockbuster original.

Johnny English (PG, 2003): Ever wonder what Mr. Bean might look like as a secret agent? Well, this film is your chance … sorta. Comic actor Rowan Atkinson plays out a spoofy version of a James Bondian-agent, complete with super gadgets, bad-guy fights and some icky toilet humor. But all toll, our Bob Smithouser called it “appealingly lightweight and often innocuous fun.”

That Thing You Do (PG, 1996): A small town band becomes a sensation after the group’s drummer breaks his arm and is replaced by a jazz enthusiast who injects a little something different into their music. Then it’s off to see what the “big time” really looks like in 1964. This delightful tale was written and directed by Tom Hanks. And Plugged In’s Bob Smithouser noted that it “will help many teens better understand the environment their parents grew up in—and how drastically American culture has changed in the last 32 years.”