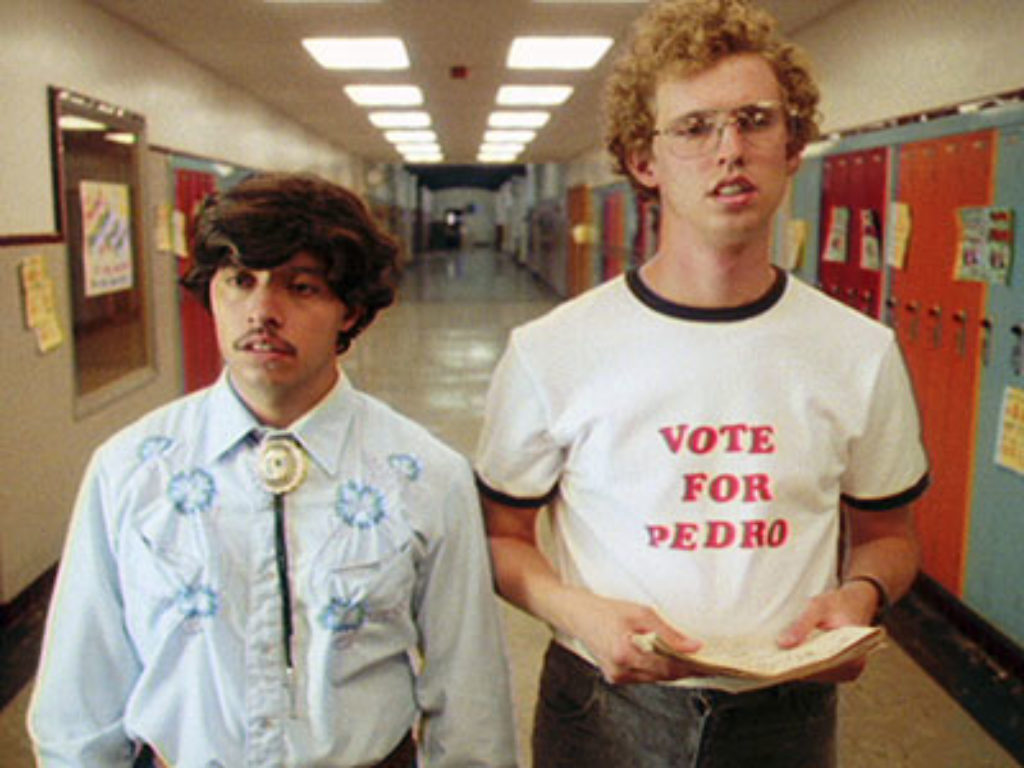 Every high school has them: those kids who seem lost in their own world, tragically unhip and perpetually excluded from the ranks of the beautiful and athletic. Napoleon Dynamite paints a quirky, satirical portrait of “them” as they try to make the most of their low-key lives in the rural community of Preston, Idaho.

The opening scene sets the stage for what we can expect from the film’s antihero, Napoleon Dynamite. On the bus to school, Napoleon surreptitiously ties fishing line to a plastic action figure and tosses it out the window. He gleefully trolls the plastic hero behind the bus—for no apparent reason other than the joy of simpleminded (and typically harmless) mischief.

The gangly, bespectacled Napoleon, who is the quintessential object of derision for the popular crowd, then proceeds to meander through a random series of seemingly meaningless vignettes involving his friends, Deb (a budding photographer with a nearly imperceptible crush on Napoleon) and Pedro (who is almost completely devoid of personality, yet decides to run for class president), and his older brother, Kip (a 32-year-old chat room junkie who still lives at home). Each character is focused on a particular, if modest, goal, and each must endure the mockery of those who oppose them. In addition to the jocks and popular kids, Napoleon also squares off against his Uncle Rico, a sadly misguided character who’s living in the past (1982, to be precise) and who seems determined to thwart Napoleon’s best efforts.

One typical—hilarious—scene has Napoleon lamenting his inability to attract girls because he lacks “skills”: “Girls only want boyfriends who have great skills. You know, like nunchuck skills, bow hunting skills, computer hacking skills.” Pedro reminds him that he likes to draw, and suggests that Napoleon sketch a portrait of the girl he wants to ask to the dance—putting his skills to work.

Napoleon Dynamite offers many opportunities to laugh heartily at (with?) its underwhelming characters. It also invites us to identify with their determination to take risks in pursuit of what they want in life. Their progress is modest, but real—just as is often the case in our lives.

Napoleon has a taste for unfashionable T-shirts with animals on them. One such shirt has the word “Endurance” emblazoned over the top of a faded horse graphic. One suspects that endurance might be the primary subtext in the film, as each of the four main characters perseveres through ridicule, scorn and mockery in their respective pursuits.

Pedro comes from a Catholic home, and the family’s house is full of pictures of Jesus and Mary. Napoleon mentions magic twice in passing; his favorite animal is a “liger.” “It’s like a lion and tiger mixed,” he says, “bred for its skills in magic.” He claims that a wizard’s magic spell protects the Loch Ness Monster.

The film doesn’t have any overt sexual content. One of Uncle Rico’s money-making schemes, however, is “Bust Must,” an herbal breast-enlargement product. Rico pitches his product to an older woman named Starla, but also to Napoleon’s high-school classmates Summer, Trisha and Deb. (The scenes with Rico interacting with high school girls about their breast size have a creepy, inappropriate feel.)

Napoleon tries to ride Pedro’s mountain bike over a jump, but the ramp collapses, and Napoleon rams his groin into the handlebars as he goes down. Napoleon’s grandmother rides over a sand dune ridge on her ATV, flying off the back of it.

Napoleon and several other “nerdy” characters are frequently harassed by the jocks at their high school. These bullies slam Napoleon up against his locker, put him in a headlock, and generally push him around. One jock does the same thing to another geeky student, putting him in a head lock until he coughs up 50 cents. Later, the same bully tries to intimidate that student into letting him “borrow” his bike.

Kip is convinced that he’s a karate master and asks Napoleon to hit him. Napoleon offers a weak jab that Kip blocks, then kicks him in return. When Kip doesn’t expect it, Napoleon slaps him in the face. Later, Napoleon puts Kip in a headlock while they’re wrestling. Napoleon and Kip check out Rex Kwon Do’s karate school after seeing a commercial for it on TV where the martial arts master disarms an assailant with a gun. At the karate school, Rex humiliates Kip by blocking Kip’s lame attacks and showing the students how to strike back.

Uncle Rico flings a half-eaten steak at Napoleon, hitting him in the face. Napoleon hurls a grapefruit at Rico’s van, then at Rico himself. The two then begin wrestling on the ground, and Napoleon elbows Rico in the chest to get away from him.

Rex Kwon Do pummels Rico. (Sounds of the encounter are all moviegoers experience; the camera retreats to the front of the house.) A farmer shoots a cow, horrifying a passing busload of schoolchildren.

Napoleon frequently uses exclamations such as “gosh,” “jeez,” “freakin’,” “crap” and “heck.” One character talks about being “p—ed off.” Napoleon intones, “There’s like a butt-load of gangs at this school,” calls people “idiots” several times and says, “You guys are retarded.”

Uncle Rico is duped by an Internet offer selling a time machine. The machine consists of a control box, an electrified headband and a T-shaped plunger that the user puts between his legs. Both Rico and Napoleon find out the hard way that time travel isn’t real but electricity is, a lesson that leaves them limping.

Napoleon is prone to lying and storytelling. Responding to a classmate’s inquiry about what he did over summer break, Napoleon responds, “I spent it with my uncle in Alaska hunting wolverines.” Later, Napoleon brags to Pedro, “This one gang kept wanting me to join because I’m pretty good with a bowstaff.” And when Deb gives him a picture of a woman she’s photographed as an example of the kind of work she does, Napoleon keeps the photo and tells Pedro that it’s his girlfriend from Oklahoma.

Napoleon Dynamite is an odd yet appealing and funny film. On the surface it appears to be just one more iteration of the popular Revenge of the Nerds theme: misfit kids banding together to throw off the oppression of those who are stronger, more beautiful and more popular. Underneath, it’s less about battling the privileged than about four kids trying to make their own unique way in the world.

Likewise, it’s a typical teen movie. And yet it isn’t. Some of the standard features are very much in place: the odd-kid-out looking for his place in the world, and popular teens mercilessly harassing the geeks. But that’s where the formula ends. Other elements that countless teen movies have programmed us to expect—profanity, flagrantly rebellious behavior, sexual exploits and unbelievable plot twists—are absent from this curiously un-edgy film. Call it the anti-teen movie.

Yes, it does go for some easy, slapstick laughs at the characters’ expense. But at the same time it exudes a knowing self-awareness. For example, Napoleon Dynamite might be the most misnamed character in the history of cinema. It would be hard for Napoleon to have less in common with his namesake, the French emperor and would-be conqueror of Europe, Napoleon Bonaparte. In contrast, Napoleon Dynamite’s gentle goofiness marks him as a social pariah. Dynamite he is isn’t. His very name is a wink at the audience, a clue for how to watch.

I don’t believe the filmmakers intended their work to be taken at face value. Instead, we are to recognize that these characters are creative caricatures. We all know these people, somehow. Thus, Napoleon Dynamite becomes an everyman whom we can all relate to. We laugh at his idiosyncrasies even as we realize that we may be blind to some of our own. What could be a mean-spirited film picking on hopelessly unaware nerds is actually very aware of who these characters are—and we root for them. Napoleon Dynamite is hip precisely because its makers are aware of how unhip it is. We’re not invited into the film’s world to mock these characters—though some desensitized teens and twentysomethings may well do so—but to relate to them and use them to reflect on our own foibles, and our own dreams and goals.

That said, Napoleon Dynamite is a cult comedy classic in the making (it could easily take on a Monty Python—like mythos), and it elevates geek chic to a whole new level. It doesn’t, however, exalt geekiness as much as it lauds the idea of being who you are. In the words of the movie’s tagline, “He’s out to prove he’s got nothing to prove.”