The Kid Who Would Be King 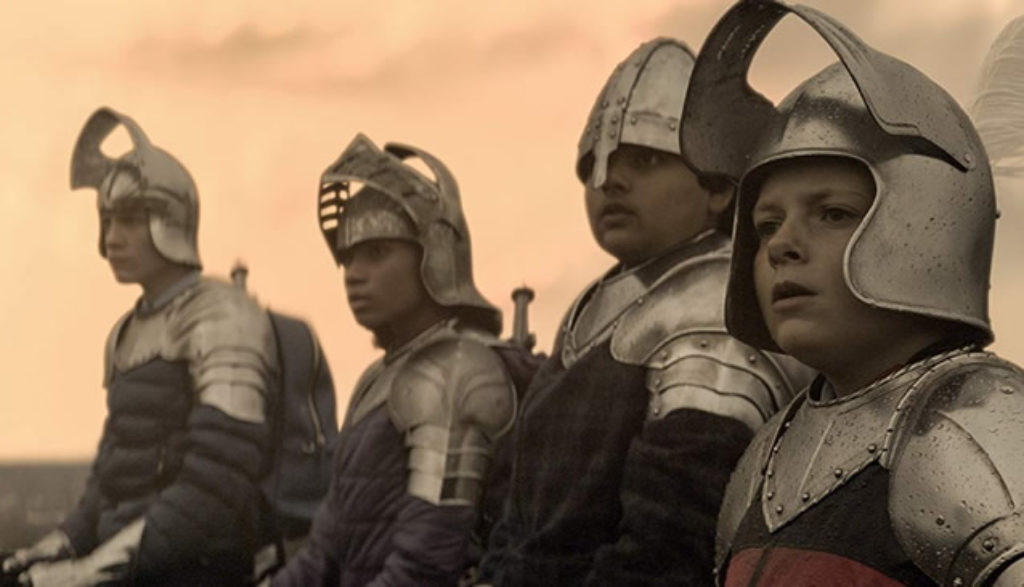 In fact, to your average bully this kid looks to be an easy pushover. And that’s pretty much exactly what bullies do whenever Alex and his friends cross their paths.

That’s not to say Alex won’t try to stand up for himself and others. He always has to keep a protective eye out for his best bud, Bedders, for instance, who just happens to be an even easier-looking target than he is. Alex will charge in and do whatever he can to fend off schoolmates like Lance and his female sidekick in thuggery, Kaye.

But one night after being chased into a construction site by those two bullies, Alex finds something quite curious: a sword. But not just any sword. This nicked and battered weapon of silver and steel looks ancient. It has Latin etched into its haft. And it’s stuck in a large chunk of a broken concrete column.

I know what you’re thinking: “It can’t be that sword in the stone.” And that’s exactly what Alex thinks too. But he’s always been a kid who appreciates grand fantasy. So he steps up, braces himself, gazes into the night sky and gives the old relic a heave-ho. And … pulls it free of its bonds.

Alex knows the old thing is just a piece of junk somebody hammered into the concrete block on a lark. Somebody’s idea of a funny joke. But it’s still cool to pretend. So as Alex jams the sword through the bottom of his backpack and takes it home, he can’t help but laugh. It’ll make for a good story the next time he sees Bedders.

But deep in the primeval blackness of a subterranean pit some miles beneath the Earth’s crust, there is no laughter. The sound heard in this musky morass is more of a gasp, as a creature’s head snaps upright. To look at its vine-covered form, you might say it looks human. Female to be more exact. And when her eyes spring open you would know you were right.

Morgana, half-sister of King Arthur and the fiercest magical foe of a wizard named Merlin, was long ago banished from the world of man in defeat. But on that fabled eve centuries before, the terrible sorceress vowed one day to rise again and reclaim what was rightfully hers.

She would wrest herself from the deep, raise up an army of undead knights and reacquire a certain sword. A mystical weapon called Excalibur, her key to destroying all mankind.

Far, far above her, someone has finally pulled that weapon free. Morgana can feel it, as life and magic begin surging through her once more.

Excalibur is free and sheathed in something called a backpack. And it’s hers for the taking … as is the rest of the world once she accomplishes that fell feat.

For all of its broad fantasy ways, the one thing this film and its hero get serious about is the fact that honor and goodness take work. In fact, a reborn version of Merlin the magician reiterates this fact to Alex, saying, “The most worthwhile path is seldom the easiest.”

In that spirit, Alex works diligently get his human bullies, Lance and Kaye, to join him in his fight against a coming evil. They laugh at and chide him at first, but they eventually come to see Alex for the consistent, good and trustworthy leader he is. And those qualities change them for the better.

The new knights of the round (coffee) table pledge to live by a chivalric code, a set of rules that Merlin states all knights once lived by:

Honor those you love.

Refrain from wanton offense. (Don’t swear, be rude or be nasty.)

Persevere until the end.

The wicked Morgana endeavors to use the young friends’ physical, moral and ethical weaknesses against them (to make their hearts “grow hollow”). “That’s how evil tricks you,” we’re told. “It turns people against each other to distract attention from itself.” But as these adolescents embrace this code of honor, it empowers them to stand in unity (along with many other students who are eventually recruited) in the face of evil.

Though the movie’s messages about battling evil with good aren’t explicitly connected to a Christian worldview, the virtues these kids display certainly echo important biblical teachings. In this, The Kid Who Would Be King offers plenty of teachable moments about the struggle between good and evil for families to discuss together.

Along with these lofty ideals, this pic also lauds the value of faithful friendship. And even as Alex finds out some disheartening things about his father (who abandoned Alex and his mother when the boy was still quite young), he learns just how much his loving mom has sacrificed for him.

Magic abounds here. Morgana uses dark sorcery to raise dead skeletal warriors from their graves by the hundreds and to transform herself into multiple monstrous creatures.

When Morgana’s minions arise, all other mortal life on Earth—except for Alex and his beknighted friends— temporarily disappears. In fact, we’re told that it’s Morgana’s goal to take possession of Excalibur and make humankind disappear permanently.

Young Merlin, on the other, uh, hand, uses finger-snapping, hand-slapping expressions of magic to do everything from multiplying objects and conjuring percussive energy blasts to opening magical portals in Stonehenge through which the teen knights can travel. (Bedders is so taken with Merlin’s amazing acts that he works to duplicate the process himself.) Merlin also repeatedly transforms himself into an owl, an action that’s accomplished by sneezing. We also see Merlin in his older wizard form.

Compared to Morgana and her foul sorcery, Merlin’s “good” magic seems to be quite limited. It is depleted by his efforts, after which he must be recharged through rest and a potion of “beetle blood, beaver urine and ground bone”—all ingredients that he says are contained in the meals at a local fast food joint.

“God’s socks!” Merlin spouts at one point. The Lady of the Lake, the keeper of the sword Excalibur, can magically appear in any body of water in England to give Alex aid. We’re told that certain parts of the world are “strong in magic.”

When Young Merlin first reappears in our time, he materializes as a teen with no clothes. We see the naked young man walking across a field, though fog obscures direct frontal nudity. That said, we do see the surprised expressions of several folks who encounter the unclothed lad—until, that is, he magically induces a guy to give Young Merlin his clothes.

Likewise, when Morgana awakens in the shadowy depths of the Earth her body appears to be covered by nothing but wraps of formfitting vines. Though she’s clearly a woman, her transformation into a gargoyle-like being at one point seems to destroy her shirt; but the monstrous creature she becomes lacks recognizable female anatomy and seems to be asexual.

Demonic-looking knights on horseback scrabble up from their earthy graves and give chase with flaming swords in hand. The creatures are huge and fearsome. They only disappear when they are struck or when they crash into solid objects and crumble into pieces.

No humans are ever killed by these fire-engulfed creatures. But that doesn’t stop the undead beasties from trying. They swing their large swords, nearly missing several teens while smashing windows and doors and setting buildings afire. A number of teens are also battered and tossed aside by these evil marauders.

A lengthy chase scene finds teens and their monstrous pursuers alike on horseback, recklessly racing through a forest. A dragon eventually swoops in, breathing fire and snapping at people with sharp teeth as Alex and his friends struggle to know how to combat it. (Their strategy involves throwing ropes around the dragon to distract it long enough for Merlin to polish the mythical monster off with his own magic).

By story’s end, multiple dark creatures are decapitated in one way or another.

Alex learns that his dad left him and his mom because the man was an alcoholic and “struggling with his own demons.”

We see Lance and Kaye bully several different kids. And even when they become Alex’s allies, they aren’t always trustworthy. Morgana uses their character weaknesses against Lance and Kaye, prompting the teens to steal their friends.

Alex directly disobeys his mom while trying to pursue his quest, even pointing a sword at her. (But the movie asks us to “understand” Alex’s actions as being excusable, as Alex understands what’s at stake in the movie while his mother doesn’t.) Elsewhere, an entire lunchroom of kids throws food and jeers at a gangly young man.

Do you hear it? The thundering of hooves? The clanging of steel against steel? The bright flash of magic in the night sky? It’s a call for honor and bravery to win the day.

The legend of King Arthur has been told, retold and reshaped many, many times in the past. This time, the chivalric chronical gets dusted off and given a modern-day tweak: It features a gaggle of adventuring British youths in school uniforms who’re barely big enough to raise the swords they’re tasked to defend the realm with.

This story of a boy who finds a mystical sword, rallies his friends and foes, and goes on to battle evil incarnate can feel, well, a bit creepy at times. Fiery, demon-like knights rising out of the ground and chasing children can do that. The tale is also rather silly in other spots. And by movie’s end the whole kids-versus-skeletal-foes affair can feel like it has overstayed its welcome by a good 15 or 20 minutes.

All of that said, though, The Kid Who Would Be King packs an unexpected charm with its clanging armor and monster jousting. There are lots of funny bits. And some surprising bit parts played by some seasoned actors.

Ultimately, this kids pic stands strong, trumpeting solid lessons about unity, friendship and courage in the face of wicked malice. It states that when men’s hearts grow hollow, when they have no purpose to cling to, no righteousness to claim, that’s when evil prevails.

Who’s gonna sneer at an Arthurian life lesson like that?

As Merlin said, “The most worthwhile path is seldom the easiest.” For some ideas on how to avoid the easy path and to keep from becoming “hollow,” check out these suggestions:

Are You Protecting Your Kids From Reality or Preparing Them for Life?

Perseverance: How Your Kids Can Overcome Hardship

Middle School: The Inside Story. What Kids Tell Us, But Don’t Tell You