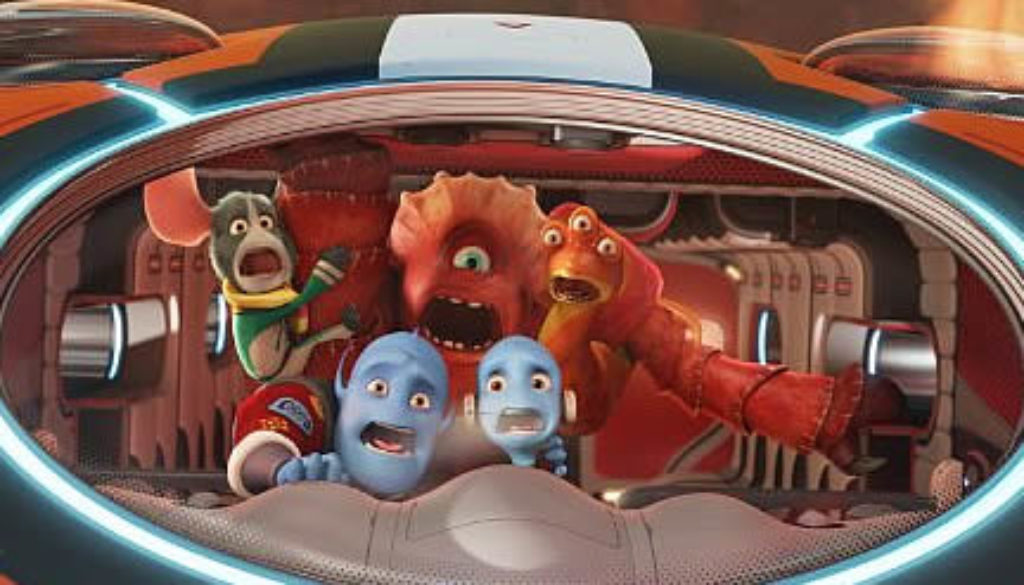 It’s not easy being blue.

Oh, that lovely primary pigment works just fine on planet Baab. Everyone’s blue there. But when Scorch—Baab’s most famous muscle-bound heroic dude—undertakes a perilous rescue mission on planet Earth, things go bad in a hurry. First he tries to save one of those poofy, wavy, air-filled things that are typically used to attract attention at cheaper car lots. Then he’s surrounded by scores of tranquilizer-wielding weirdos in hazmat suits. Before you can say “E.T. phone home,” Scorch is out cold and on his way to Area 51, in the evil clutches of the large and vengeful General Shanker.

Alas, Scorch might’ve had better luck rescuing that poofy, wavy, air-filled thingy had he not been blue (and not arrived in a garishly colored spaceship). Because when yellow-suited men see someone blue strolling around the deserts of Nevada, they figure he’s got to be either a medieval Scottish warrior or a visitor from another planet. And let’s face it, medieval Scottish warriors just don’t get to Nevada very often.

To make matters worse, Scorch was apparently Baab’s only muscle-bound hero, and there’s not really an obvious would-be rescuer within several parsecs. Scorch’s boss, a sea-colored femme fatale type named Lena, seems strangely reluctant to OK a rescue mission. Is there no one on Baab with the derring-do to help Scorch out of his ticklish terrestrial trouble?

No, not really. Though there is Scorch’s brother, Gary.

Gary’s just not the rescuing type, you see. He’s the sort of guy who looks left, right, and then left again before crossing the hall to the bathroom. And though he’s always helped coordinate Scorch’s daring missions from the safety of Baab, the brothers had a bit of a falling out before Scorch took off this time.

No matter. Scorch is the only brother Gary has, and he doesn’t want to lose him. So in an uncharacteristic fit of heroism, Gary commandeers a ship, waves goodbye to his wife and son, and careens through the galaxy, heading to our very own super-perilous planet.

And when a blue boy of Baab brandishes barrels of bravery for his beefy but barely bright bro, beware.

Scorch and Gary have their issues. Scorch has been known to mock Gary for being timid and geekish, and he downplays Gary’s contributions to his rescue missions. For his part, Gary thinks Scorch isn’t brave as much as he’s reckless—and it drives him a little nuts that his own boy, Kip, idolizes Scorch so much.

But they do really care about each other, and they grow to appreciate each other’s strengths as this animated adventure amps up. Escape From Planet Earth illustrates that while courage is great and all, it’s sure helpful to balance it with a little common sense. Otherwise you’re liable to spend the rest of your life building doomsday machines for embittered rogue generals. Conversely, as Gary says, “All the planning in the world doesn’t help without a hero to make it happen.”

This movie isn’t solely about brotherly love. Whole families get a big shout-out here. Kira, Gary’s wife, gave up a promising career to raise Kip—a decision treated with distain by Lena (who, it’s insinuated, took Kira’s old job). But Kira proves she’s more than capable to deal with any challenge that comes her way, eventually proving to Lena that she’s just as resourceful and skilled as any working woman (and can throw a mean left hook, too). And while young Kip is sometimes a bit high-spirited, he winds up saving his family and, indirectly, the galaxy.

To sum up: Watching colorful aliens figure out familial love while displaying serious amounts of courage, ingenuity and tenacity can do inspirational good for us equally colorful human moviegoers.

In studying for Scorch’s mission, Gary learns that Earth is the only corner in the galaxy that’s “evolving in reverse,” with gentle dinosaurs regressing to the stupid, aggressive people that populate the planet now. The computer also tells Gary that humans worship a variety of things, from money and soup to dental care and Simon Cowell.

Later, we see a Baabian wedding—officiated not by a priest, but by a galactic radio talk show therapist. When Scorch is lured by the glow of a 7-Eleven, Gary cautions him to “not go into the light.”

We see the ripped Shanker pose shirtless in a galactic dating profile pic. Another human walks around in a towel—until it flies away. We don’t see what was under it, of course. But we do see part of Rodin’s nude statue The Kiss. Aliens visiting Earth are cautioned to not display any nudity.

We hear the loaded line, “Hey, don’t ask, don’t tell, right?” There’s some smooching, both of the married and unmarried varieties. [Spoiler Warning] Lena has been carrying on an extremely long-distance relationship with Gen. Shanker. They tell each other mushy sweet nothings via large telescreens.

Escape From Planet Earth is filled with slapstick shenanigans from the opening title screen to the closing credits. Aliens and hazmat-wearing humans fight each other quite a lot, getting hit and kicked and thrown around. Folks from here and there get frozen by Shanker’s freeze guns. And one of the aliens gets his lips stuck on the barrel of a gun, which he was kissing in gratitude. Gary, Scorch and other aliens are frozen in large canisters.

Missiles are fired. The general’s henchmen shoot dozens of tranquilizer darts at Scorch before one finally tags him in the back. Two Baabians fight and are thrown around in a spaceship—one opening an airlock hoping the other will get sucked into space. One nameless alien is swallowed whole by another nameless alien. Helicopters and planes crash (with the pilots all making it out safely). Aliens and a human fall from a great height (but are saved before they hit the ground). Exploding tape blasts out a window pane, pelting would-be guards outside. Area 51 prisoners are physically shocked by their collars.

A flashback shows Shanker’s father presumably killed when an alien ship crashes. And it’s not entirely coincidence that Shanker is now building a massive weapon of “peace”—ostensibly to protect Earth from asteroids. “Nothing says ‘peace’ like an oversized gun,'” Gary quips. And, indeed, Shanker does hope to use the gun on every populated planet in the galaxy, demonstrating the weapon’s prowess by vaporizing Halley’s Comet.

In a recurring gag, an alien repeatedly steps on a broom, causing the handle to whack him in the face. He also falls off a small ladder.

One exclamation of God’s name. One incomplete “what the …?” A “heck” or two. Name-calling includes “moron,” “suckers” and “rat.”

The tranquilizer dart makes Scorch act momentarily drunk. Shanker swirls around a glass of what appears to be wine or brandy as he talks with Lena. We see a couple of aliens get “high” drinking a beverage that is, Gary tells us, “800% sugar.”

Against his father’s direct orders, Kip sneaks off to try to save Scorch—hopping into a spaceship and very nearly taking off in it. (His parents stop him in time, but it should be noted that before Scorch left, he jokingly asked Kip to rescue him should he get into trouble.)

An alien blows a bubble with his nose mucus, causing another alien to vomit in an airsickness bag. Gary clangs what appears to be a metal cup across jail bars (an homage to an old black-and-white movie cliché) before he’s told it’s actually his roomie’s toilet. (The roomie is, incidentally, covered with slime.) We hear jokes referencing the smell of latrines and bad breath.

Escape From Planet Earth isn’t destined to be a classic. It might not even be destined to stay in theaters for more than three or four weeks. Animation lovers looking for character development or poignant, Pixar-like moments—or even really solid moral messages—are going to have to start looking somewhere other than Area 51.

But is it watchable? Can kids learn anything from it? Sure. We get some feel-good family stuff here. We see that whole heroism colliding with common sense thing I talked about in “Positive Elements.” We crash into a story so goofy that I’m not even tempted to talk about how we pesky humans show up as the bad guys and the aliens are the good.

So since I’ve already detailed the gross-out humor, the slapstick violence and the fairly fleeting reference to evolution, I think I’ll now just escape from this review.

Download (pdf) a free Movie Nights page designed to help your family enjoy this film at a whole new level! Find other interactive discussion starters in our Movie Nights section.