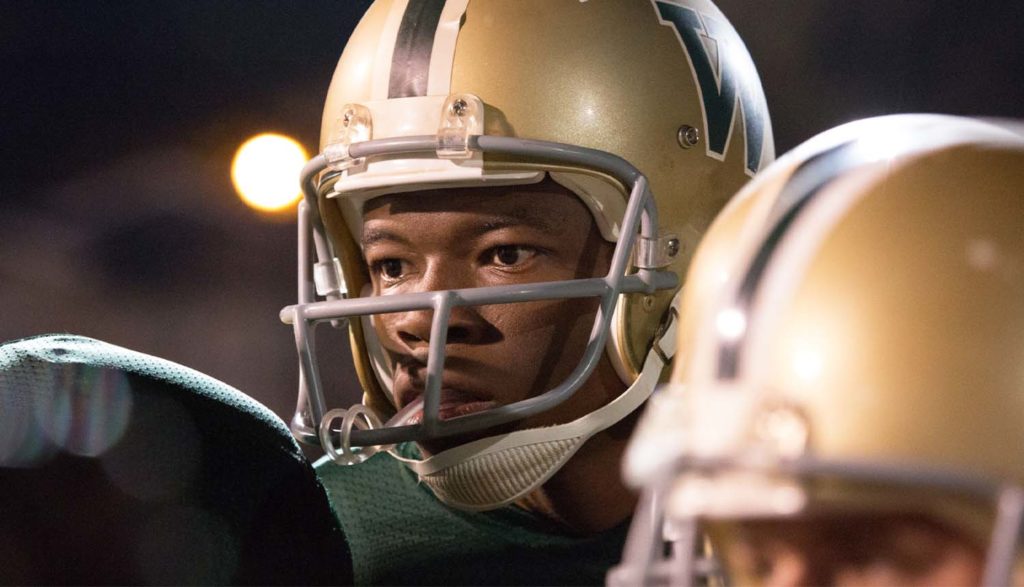 Football is custom-made for dramatic storylines. And faith-filled ones as well, which is why Christian movies about the sport abound. So we’re going to point you toward seven Christian football movies to consider streaming this fall, as well as three mainstream films with a significant faith elements woven in.

And if you’ve ever looked at any of our film lists before, you know we need to throw a mild reminder in at this point: While these are all terrific movies, some have a bit more content concerns than others. So as always, you’ll want to check out our full reviews before your stream or rent.

We often say that someone who’s mastered their craft could do it with their eyes closed. And that, in a way, is the story in the Christian football movie 23 Blast. Travis Freeman was a natural born receiver, catching everything thrown his way. But when life throws him a curve in the form of bacterial meningitis, the main casualty is eyesight. Blind, but clinging to his faith, Travis begins to come to grips with his new reality. And then his coach has an idea: “I think you should play.” And so, at center, Travis bravely begins a new season of his athletic career, one that will be full of lessons about faith and perseverance for him and many people around him.

American Underdog blitzed theaters in late 2021, telling the unlikely (but absolutely true) Cinderella story of Kurt Warner and his “greatest show on turf” time with the St. Louis Rams. Kurt longed to play pro ball. But it seemed like everything was conspiring against his dream. Kurt’s briefly flickering NFL hopes flagged, and he found himself stocking groceries in a local grocery store … and striking up a relationship with a single mom named Brenda. But Kurt gets a second chance with the Iowa Barnstormers arena football league, which eventually leads to St. Louis, an unlikely Super Bowl victory and an MVP award. Along the way, we see how Brenda’s fierce faith shaped Kurt’s own Christian journey in directors Andrew and Jon Erwin’s second inspirational football film.

If it seems as if the world never quite runs out of amazing true football stories, well, maybe that’s true. We certainly get one in The Blind Side, where a wealthy white woman (played by Sandra Bullock, who won an Oscar for her role) invites a struggling football player named Michael Oher to become a part of their family. The rest, as they say, is history, as Leigh Anne Tuohy’s influence helps Michael to succeed in ways he may not have otherwise. That said, the film also avoids the implication that Leigh Anne is some sort of “white savior.” Instead, it focuses on how our relationships and faith shape us and prepare us for life. And while this is a not a Christian movie per se, we still see how faith plays an important role in the Tuohy family.

It might seem hard to remember now, but there was a time before brothers Alex and Stephen Kendricks were household names among Christian moviemakers. Back in 2006, the Kendrick Brothers directed their breakthrough movie, Facing the Giants. It told the story of a struggling high school football coach trying to guide his team to victory even as virtually every part of his personal life fell apart. The movie’s David vs. Goliath-like themes would become something of a metaphor for its own real-world success. The Kendrick Brothers—with God’s faithful blessing, of course—leveraged their $100K budget into a movie that took in a whopping $10 million at the box office and paved the way for further success in the genre. If you’re looking for a feel-good film about faith and football, you’d be hard pressed to find a story more inspiring than this one.

Brandon Burlsworth hailed from sleepy Harrison, Arkansas. Greater tells his story—a tale of triumph and tragedy, of life and death, of faith and deep questions. The football part of that story follows Brandon as his determination and character prompt one reporter to say that his is “quite possibly the greatest walk-on story in the history of college football.” Against all odds, Brandon lands a spot on the Arkansas Razorbacks football team. But a tragic accident cuts his life short (which is revealed early in a film told with flashbacks). So we watch as the people who loved Brandon try to make sense of what seems an utterly senseless loss, clinging to their faith when despair threatens to overwhelm them. Inspiration and grit are the name of the game in this football movie. But Brandon’s sudden death will have you reaching for Kleenex, too.

If you had to assemble an all-star cast for a football movie, who would you pick as the coach? I think we all know that the right answer is Denzel Washington. He stars here as Coach Herman Boone, a man of no-nonsense principle who steps in to coach a football team torn by racial division in 1971. Boone epitomizes old-school character development as his coaching style emphasizes discipline, integrity and faith. And when push comes to shove, Coach Boone makes an incredibly sacrificial choice for the sake of others.

No list of inspirational football movies would be complete without 1993’s Rudy—a movie that’s old enough to predate Plugged In’s movie review coverage and the only one here for which you won’t find our review. Eight years before actor Sean Astin would assume the role of Samwise Gamgee, he played the iconic role of Daniel “Rudy” Ruettiger Jr. Rudy dreamed of playing football for Notre Dame. But any way you want to slice it, that dream was impossible. Simply attending Notre Dame, never mind playing on the Catholic school’s fabled football team, was the longest of long shots for Rudy. Add in his small stature, and there was simply no way Rudy could ever hope to play even a single play for Notre Dame … was there?

This 2019 sports movie produced by Tim and Robby Tebow might have the least honest-to-goodness football action in this list of Christian (and inspirational) football movies. But the gridiron does serve as a springboard for the story’s dramatic plot. Brothers and high school seniors Dave and Zach Truett have had a rough go. Their mom has died of cancer, their dad’s an alcoholic and Dave has suffered a nearly life-threatening injury. Dave, however, clings tenaciously to his faith, even as Zach struggles in that area. He’s determined to make football their way out, their lifeline to something better down the road. But Zach gets injured, too, he and Dave realize even more deeply how much they must trust God instead of themselves.

When the Game Stands Tall

The Streak lasted more than a decade, from 1992 until 2003. But eventually, every team loses. The dynasty ends. And so it was at De La Salle High School in Concord. The football team won 151 consecutive games, the longest winning streak by any sports team at any level in American history. And at that point, devout Catholic Bob Ladouceur had a coaching task more mammoth than winning the next game. Instead, he had to help his team navigate the meaning of loss for a team and town that had forgotten losing was even a possibility. Jim Caviezel stars as Coach Ladouceur, delivering a heartfelt performance as a man striving to teach his young charges that teamwork, sacrifice and love ultimately matter more than winning championships and keeping the dynasty alive.

Before Andrew and Jon Erwin told Kurt Warner’s football story, they told another football-based Christian movie: It’s the story of Woodlawn High School in Birmingham, Alabama. In 1973, 10 years after Dr. Martin Luther King Jr.’s famous Civil Rights campaign in that city, racial tension still boils—especially since the predominantly white school is being forced to accept 500 Black students from other parts of the city. Coach Tandy Gerald does his best to help his players channel their frustration into football instead of toward each other. But it’s a sports chaplain named Hank (played by Sean Astin) who challenges the team to put their differences aside and to embrace Christ. They do, and their remarkable unity in a city torn by strife becomes an incredible testament to the reconciling message of the gospel. And, of course, they play some football along the way as well in this emotional and inspiring reenactment of a true story.