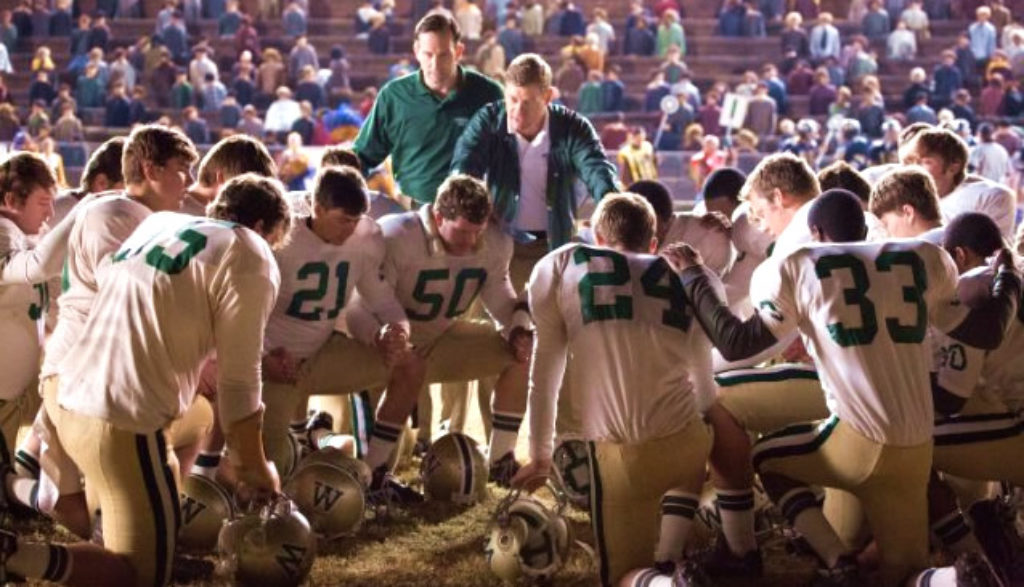 The 1960s was a watershed decade for the Civil Rights movement, a decade in which landmark federal rulings technically made discrimination against blacks illegal. But for years more, resistance to federal laws mandating integration and equality for blacks remained fierce, especially in the Deep South.

Nowhere was that more true than in Birmingham, Ala., one of the key Southern cities where Martin Luther King Jr. protested blacks’ unequal treatment. And in 1973, 10 years after King’s famous Birmingham campaign, the compulsory integration of blacks and whites in schools remained explosively controversial.

At Woodlawn High, a white school of 2,500 students is forced to accept 500 black students bussed in from poorer parts of the city. The result is volatile: Black and white students and teachers eye one another warily; fights send kids to the hospital; and on the football team, racial animosity is practically palpable.

“Anger,” says Coach Tandy Geralds on the team’s first day of practice. “I see it in your faces. You’re angry because of what’s happened to this school. … None of us chose this. It was forced on us. We can choose together what we will do with it. So if it is anger that unites us, then let’s use that anger to win, boys. ‘Cause winning fixes just about everything, doesn’t it?”

Channeled rage coupled with gridiron glory, Coach Geralds suggests, might be the best the Woodlawn Colonels can hope for as they launch their fall 1973 gridiron campaign.

Then Hank shows up.

A sports chaplain who came to Christ listening to Billy Graham preach, Hank’s got a radically different message for the members of Coach Geralds’ team. A message about Jesus he begs the coach to let him share.

No, Geralds says. But when the determined evangelist shows up after a riot goes down at the school, Geralds relents. “Five minutes,” he says.

An hour later, the entire team has answered Hank’s challenge to surrender their lives to Christ, and to live differently on the field and off. It’s a ripple of redemption and racial reconciliation that starts slowly at first. But before long, the ripple expands into a wave that rolls off the Woodlawn gridiron and into the heart of racially fractured Birmingham, thanks in large measure to a courageous black running back named Tony Nathan.

Woodlawn brims with faith-focused themes, as we’ll see. And it pairs that faith-fueled emphasis with another value: courage.

Hank courageously keeps asking Coach Geralds for permission to share his faith. Coach Geralds courageously holds to his emerging convictions about integrating his football team and owning his own faith when both are challenged. And Tony Nathan perhaps has to exercise the most courage of all, both on the field and off.

Though he’s full of football ability, Tony doesn’t like getting hit. So he develops fortitude learning to take the hits. And when racist pressure ratchets up for him to quit (the more successful he becomes), it takes courage for the young man to stay in the game—both literally and metaphorically.

Tony exhibits a wise-beyond-his-years understanding of how his stardom as an athlete influences people. The running back develops a friendship with a quarterback from a rival team, Jeff Rutledge (whose team also has a revival-like Christian experience). The day before a huge game (which draws a record 42,000 fans), the two high schoolers run into each other while practicing. Jeff says, “It’s crazy, all these people coming to see us. What’s so special about that?” Tony replies, “We’re a symbol. We give them hope.”

Tony’s sense of calling as a football player is naturally influenced by his parents, who are lovingly committed to their son. It’s also deeply affected by the legendary coach of the Alabama Crimson Tide, Paul “Bear” Bryant. Bear is intent upon recruiting Tony, and he tells him, “Tony, when I was coming up here, I passed a football field full of kids. Saw a young black boy wearing No. 22, his head held high. That’s also because of you.”

Elsewhere, we witness Bear’s own courageous convictions about the importance of racial integration. And the film’s emphasis on combatting racism shows up in other places as well: Tony refuses to have his picture taken with Alabama governor George Wallace, who famously said that the University of Alabama should remain segregated forever; and Coach Geralds’ confession of faith at Tony’s church includes repentance for his complicity in racist attitudes.

We learn that Hank reluctantly went to Campus Crusade for Christ’s Explo ’72 conference, where he committed his life to Christ. He talks often about inspiring others to follow Christ, his influence impacting Woodlawn’s team and its two coaches. Their influence, in turn, helps a rival team come to know Christ. And in the end, we learn that a spiritual revival sweeps across many of Birmingham’s schools.

Backing up a bit, Hank’s original alter call revolves around the idea that only faith and love can overcome racial divisions. “Birmingham has seen nothing but hate for so long that it has lost its ability to believe,” Hank says. “It’s lost hope. Let me tell you what Jesus said. He said, ‘I am the way, I am the truth, I am the life.’ And that means something to me.”

Hank encourages Tony to embrace his gifts, saying, “If you play for yourself, you can be great. But when you play for something higher than yourself, that’s when something extraordinary can happen. God has a purpose for all of us, and it is not insignificant.” Tony internalizes that exhortation, later telling a reporter, “I just want to give Jesus Christ all the glory for giving us another victory.”

Before a big game, Hank talks about the story of David and Goliath. Coach Geralds is told at one point by school administrators that he can no longer lead his team in the Lord’s Prayer because it’s a violation of church and state. He continues the newly adopted tradition anyway. And when an administrator has the plug pulled on the PA system, virtually the entire stadium still says the famous prayer in unison.

Coach Geralds and his wife kiss. Tony and his girlfriend, Johnnie, briefly kiss. When Tony introduces Johnnie to his parents, Momma Nathan jokes, “And I see I’m going to have to fatten you up, because I don’t know how you’re gonna have any grandbabies with hips like that.”

Onscreen text and vintage news footage describe the racially violent context in which Woodlawn is set. “Known as “Bombingham,” we read, “the city suffered over 50 bombings linked to race issues since 1947. For decades, no cases were solved.”

Indeed, we hear about the 10th anniversary of a church bombing that killed four young girls. And a young boy watches a bus burning, one that had apparently just been bombed. We see blacks being held at bay with firehoses and police dogs. Reports of a fight at the school (involving knives) leaves six people hospitalized, and we see one young victim on a stretcher. The first day of school, Coach Geralds gets out a box of bullets, then puts a gun in his boot.

Bigots lob a brick through the Nathans’ window with a note reading “Quit Football” wrapped around it. The brick just misses Tony’s little brother, who then sees the perpetrators burn a cross with Tony’s jersey and number in the front yard.

Tony notices a mark on Johnnie’s arm, and it’s implied that her father is physically abusive. Hits on the football field are sometimes fierce. One particularly cheap shot injures Tony after he’s scored a touchdown.

Before his conversion, Coach Geralds says he’s going to smoke a cigarette (which we don’t actually see him do). Johnnie’s father shows up at a football game with a bottle in a brown bag.

Can one person really make a difference? Is it possible to overcome hostility and hatred with faith, hope and love? Woodlawn’s inspiring answer to these questions is a resounding yes.

Though the context of this movie—which is based on a true story—is football, its lessons apply to so much more than gridiron grappling. Namely, that if we can choose, in faith, to love others even when they are doing anything but loving us, we can change the world.

Woodlawn pictures what that kind of love looks like in action. Whites and black separated by prejudice embrace one another and work as a team. Rival teams and coaches who once despised one another become brothers in arms. And a city torn by strife takes some significant steps toward reconciliation. All because of the fire lit by one man who chooses to do a courageous thing: share his faith and encourage others to do the same.

The result of sharing our faith with others may not become the stuff of movies. Probably it won’t. Still, in telling the story of one such result, Woodlawn challenges us to do so anyway. 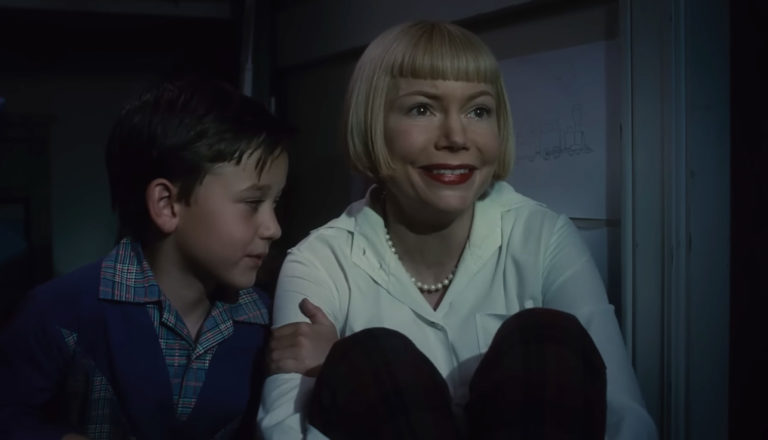