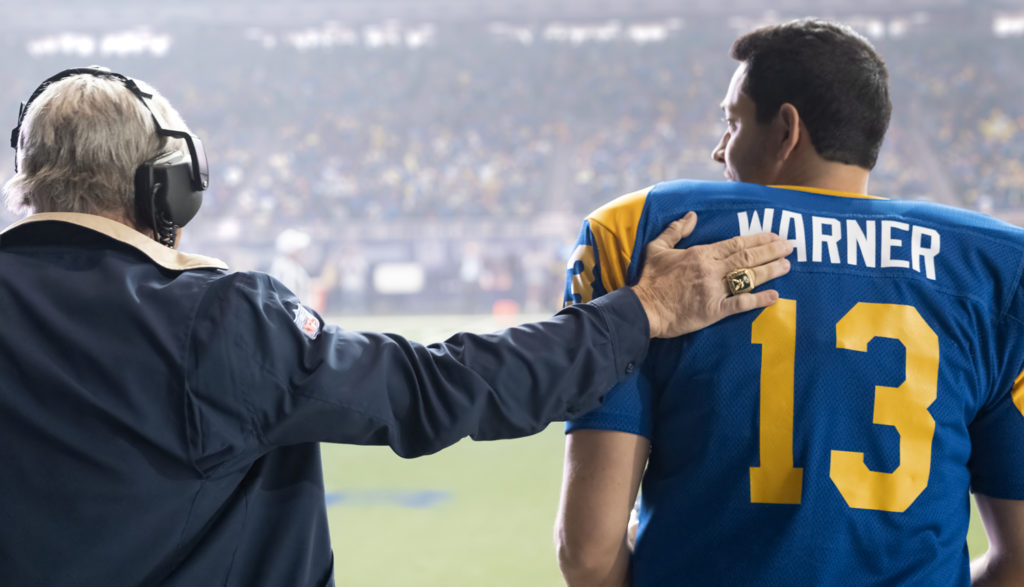 How many young boys have watched a football hero on the small screen and dreamed of one day walking in his footsteps?

Little Kurt Warner was one of those boys growing up in Cedar Rapids, Iowa. On January 20, 1985, Kurt watched as his hero, Joe Montana, led the San Francisco 49ers to victory over the Miami Dolphins in the Super Bowl. He dreamed of one day throwing the winning pass, of earning Super Bowl MVP honors, just like Montana.

But the odds against any young player following in a legend’s footsteps are long indeed. A million American adolescents play high school football each year. Of those, 5% go on to play college ball. And of those elite few, just 1% go on to play in the NFL—for an average of three years. And out of all of those players, only one might go on to be the Super Bowl MVP.

Kurt Warner clung to his dream with the tenacity of a starving pitbull. But when setback after setback pushes the dream of this former University of Northern Iowa quarterback seemingly out of bounds forever, Kurt perseveres, working, hoping and (eventually) praying for one last shot at glory.

But he doesn’t walk the path alone. Early on he meets a young single mom named Brenda. He falls for her at a bar a buddy drags him to one night. And though Brenda—a divorced mother of two—is wounded and distrustful, Kurt shows the same tenacity pursuing her as he does pursuing his NFL dream. Together, in a story so unlikely you’d never believe it if it weren’t true, they defy the odds. American Underdog: The Kurt Warner Story, poignantly tells this tale of tenacity, and of faith, hope and love.

American Underdog is undeniably a football movie. But more than that, it’s a story about faith—Kurt and Brenda’s faith in each other, their shared faith in chasing Kurt’s dream and their faith in God (more on that below).

Kurt nurses old wounds from his father’s abandonment of their family when he was just 4 years old. Football, he believes, is the only place he has a hope of finding identity, purpose and meaning—in part because that’s what his father valued. “Football was the most important thing my pops taught me before he left,” Kurt tells Brenda early on. “Football is the only thing I’ve ever been really good at. … As long as I have a ball in my hands, it feels like everything’s going to be all right.” So when it looks as if he’s not going to make good on his lifelong dream, it’s not merely a disappointment; it’s an existential blow to Kurt’s whole sense of identity.

Even as Kurt—who’s shown to be an incredibly patient, decent and fundamentally good person—pursues Brenda, she strives to help him see that there’s more to life than the game he so deeply identifies with. As first a boyfriend, and eventually as Brenda’s husband, Kurt demonstrates incredible patience, tenderness and love for Brenda’s children—especially for young Zack, who became blind after an accident in his infancy.

Kurt and Brenda face some moments of crisis where Brenda, especially, fears Kurt’s going to bail on her. But Kurt has promised to make good on his commitment to her, and so he does, even amid some deep tragedies that affect them both as their story unfolds. We also see Kurt sacrificially serve his family, such as when he has to run miles to a gas station in a winter storm after the family’s car runs out of gas.

Brenda’s parents welcome Kurt into their lives, too. At one point, her father, Larry, asks Kurt if he’s going to cement their relationship and get married. Kurt—who is at that point working in a grocery store—feels he has to prove his worth to marry Brenda. But her father wisely and gently responds, “Life is not about what you can achieve, it’s about who you become.”

Kurt’s mother—who lived through a husband abandoning her—is at first fearful that Kurt doesn’t know what he’s getting into dating a single mom. But she eventually encourages him in that relationship.

Kurt faces coaches who doubt him, push him and believe in him. The most important person in the latter category is Dick Vermeil, the coach of the then St. Louis Rams. With a twinkle in his eye, Vermeil talks of his belief that Kurt has what it takes to succeed as an NFL quarterback. By now, Kurt believes in himself, too, even if some of the other Rams coaches remain skeptical. But when the team’s star quarterback is injured in the preseason, Kurt gets his shot at the big time. And the rest, as they say, is history.

Brenda is a woman of faith and prayer, though she also has seasons of deep doubt. She talks about how, as little girl, a woman told her that she was destined to be used greatly by God. Brenda has tried to cling to that hope, even as life has dealt her a hard hand in form of her unfaithful first husband and a child with special needs due to a terrible accident.

But Brenda’s faith persists, even amid another terrible tragedy. And eventually, that faith comes to Kurt as well as he begins to pray and take hold of his own relationship with God.

At one point early in a string of disappointments, Kurt says to her, “I just wonder why God would give me a dream that’s probably never going to come true.” Brenda listens, and she encourages Kurt to keep pressing after his dream in faith—perhaps a combination of faith in himself and faith in God.

We see Kurt’s character develop more and more deeply as the story unfolds. And even as his dream of playing in the NFL comes true, we see that the accomplishment he’s longed for is no longer as important as being the best husband and father he can be. Though the movie doesn’t explicitly connect the dots to his spiritual growth, it’s clear that Brenda’s faith has rubbed off on Kurt, and that he’s made it his own.

We see Kurt kneel down and mouth “Thank You” to God after his first NFL victory.

Kurt and Brenda kiss several times. One early scene shows them passionately making out on a couch. Later, Kurt moves in with Brenda and her family (though the details of their cohabitation arrangement are never shown, referenced or mentioned).

When Kurt first meets Brenda, he sees that she’s won a spot on a calendar for women wearing particularly tight jeans—which she jokes about.

We hear that Brenda’s first husband had an affair when she was eight months pregnant with their second child, prompting her to divorce him.

Brenda surprises Kurt at an Iowa Barnstormers game. When several of Kurt’s teammates leave to party with attractive women afterward, Brenda’s expression clearly expresses her fear that perhaps that’s how Kurt’s been living, too. (A fear that’s unfounded.)

Football movies have a way of bringing the game’s inherent violence to life in wince-inducing ways. That’s definitely true here, as we see many players take tough hits. Kurt, not surprisingly, is the subject of many such crunching blows—especially in a montage where his college coach unleashes rushers in practice to prompt him to release his passes more quickly. (“Who wants to kill Kurt?” the coach announces with wicked glee.) But his football career after college—arena football and the NFL—includes big hits as well.

We hear that Brenda’s son, Zack, who’s blind, was dropped on his head by her ex-husband when he was four months old. Her husband didn’t say anything for 24 hours, but by then the damage to his brain had already caused irreversible outcomes, including blindness.

[Spoiler Warning] After Brenda’s parents move to Arkansas for retirement, she gets news that a tornado has hit their neighborhood. We see both her and Kurt as they survey the wreckage of her parents’ home, and it becomes clear that they’ve been killed in the tornado. Later, we see Brenda and her sister carrying urns (presumably of their parents’ ashes) to sprinkle on a nearby lake.

We hear about half a dozen misuses of God’s name and an equal number of uses of “d–n.” We hear “h—” twice and one unfinished exclamation of “Son of a-!”

Kurt and Brenda meet in a bar. Players from the Iowa Barnstormers arena football team can be seen drinking at a party in someone’s apartment.

Growing up in Iowa myself, I was vaguely aware of Kurt Warner’s rags-to-riches story. I knew that he’d played at UNI and that things didn’t work out quickly afterward. I’d heard that he worked at a local Iowa grocery chain. But honestly, I didn’t know much more than that.

American Underdog gives us an intimate, gritty, heartfelt portrait of the path Kurt and Brenda walked together. And make no mistake: This story is not Kurt’s alone. Because without Brenda’s love and encouragement, things may not have turned out the way that they did. In that sense, this movie is as much a story about their love for each other as it is about Kurt overcoming the longest odds to reach the absolute pinnacle of professional sports in America.

Brenda and Kurt’s faith plays an important role in encouraging and supporting them as they go through moments of doubt, disappointment and terrible loss together. That said, this film from John and Andrew Erwin (I Can Only Imagine, I Still Believe, Woodlawn and Mom’s Night Out), feels different than many other films that might be categorized as Christian movies. Instead, this one a story that has deep Christian themes naturally woven into its DNA—a movie about two Christians that really doesn’t feel like a “Christian movie.”

One place that’s evident is in the movie’s smattering of profanity. It’s definitely kept at PG levels, and most of the language we hear is in the context of coaches letting loose with some “choice” words during intense moments. I suspect it’s a lot more sanitized than what we’d probably hear on a real NFL sideline, but it’s also something that parents who want to take younger kids should be aware of.

Likewise, the story never really gives us any details about Kurt and Brenda’s living arrangement before they were married; but it’s clear that they were living together, which might be the other content issue that could come as a surprise.

Those issues may be a concern for some viewers, while others will likely understand and appreciate the Erwins’ attempt to depict the reality of the world in which Kurt and Brenda’s story takes place. I think they’ve struck the balance between restraint and realism here in a way that feels neither false nor gratuitous.

And what we’re left with as the credits roll is an underdog story for the ages, the story of man who refused to quit and the woman who loved him every step of the way—from a grocery store aisle stocking toilet paper to hoisting the Lombardi trophy aloft in victory … and giving God the glory for it.