There’s really only one singing, dancing, pratfalling part of Hollywood where the old studio system is still alive and well: the Mouse House. Nobody excels at cranking out formulaic, tween-centric sitcoms and grooming bright-faced stars quite like Disney does.

For four seasons it has served as a throwback to wacky family sitcoms with a traditional family at the center. Mom (Amy) is exhausted but still wearily smiling. Dad (Bob) is a lovable bumbler. Younger brother Gabe is a raised-eyebrow wisecracker. And Disney sitcom vets Bridgit Mendler ( Wizards of Waverly Place) and Jason Dolley ( Corey in the House) round things out as spunky sister Teddy and slowish older brother PJ (respectively).

Oh, and then there’s Charlie, of course, who started out as an infant and is now a precocious 5-year-old and an elder sister (of all things) to an even younger brother, Toby.

Every episode involves Teddy recording a video diary entry designed to guide her baby sister when she gets older. Teddy usually abandons the camera pretty quickly, though, since she’s a little too obsessed with boys and getting kissed to stay completely focused on Charlie. And the producers have to make time for random silliness, too, as Mom and Dad fumble about cluelessly … and sometimes carelessly. The accompanying (slightly out of key) soundtrack, if you will, is composed of a smattering of mild gross-out jokes, even milder sexual double entendres and bits of inane slapstick violence.

Not a bit of that is out of step at all with those old-school sitcoms I mentioned earlier. But even in the surreal land of situation comedy—even Disney situation comedy—the landscape is changing.

“While you were busy reading your 27th think piece on Macklemore performing ‘Same Love’ at the Grammys and [HBO’s gay dating dramedy] Looking being boring, something actually kind of monumental happened,” wrote The Daily Beast entertainment writer Kevin Fallon. “The Disney Channel featured its first gay couple on an episode of one of its original series. Good Luck Charlie, one of the network’s most popular original comedies, featured a lesbian couple [in its Jan. 26] episode. The plot was refreshingly innocuous, but pointed enough to let it be known that it was, you know, kind of a big deal that a Disney Channel series aimed at young children was taking this step.”

It is kind of a big deal—big enough to prompt One Million Moms to make Good Luck Charlie an “action” item, asking members to let Disney know how they felt about the inclusion.

“Conservative families need to urge Disney to avoid controversial topics that children are far too young to comprehend,” a statement from the culture-watch group said. “This is the last place a parent would expect their children to be confronted with topics that are too difficult for them to understand. Mature issues of this nature are being introduced too early and too soon, and it is extremely unnecessary.”

It’s also a big deal for many families who’ve come to trust the Disney network and its stable of previously stable sitcoms. And it’s certainly a big enough step that the creators of Good Luck Charlie did not take it lightly. A Disney Channel spokesman said of the episode, “This particular storyline was developed under the consultancy of child development experts and community advisors. Like all Disney Channel programming, it was developed to be relevant to kids and families around the world and to reflect themes of diversity and inclusiveness.”

So the Good Luck Charlie decision to feature two moms is indeed a milestone, both for the culture at large … as well as for families making everyday decisions about entertainment discernment, about what to watch together (and talk through) and what to watch not at all.

PJ gets kicked out of his apartment for not paying rent and, embarrassed to tell his parents, moves into the family treehouse. Teddy’s best friend, Ivy, is leaving for college, her parents struggling to come to terms with that. And, oh yeah, Charlie has a playdate with another little girl who just so happens to have two moms.

Bob and Amy are flustered when Susan and Cheryl show up at the house, but both (rightly) try to be good hosts. But bewildered Bob can’t help but ask, “Who am I going to watch the game with now?”

Gabe, meanwhile, promises to help PJ live in the treehouse: “If you can’t do something behind Mom and Dad’s back, why do it at all?” he says. When PJ is found out, Gabe further encourages his bro to not fess up so quickly. “Traditionally, we try a couple of lies first,” he says. He also helps PJ steal their neighbor’s Internet connection. He mocks his father’s intelligence, and all the kids make fun of Mom’s cooking.

“Catch Me If You Can”

Teddy and boyfriend Spencer lie to Mom about their whereabouts on date nights: Turns out, the two are in a musical and reluctant to fess up because Amy tends to get a little too involved in such things. Amy admits that she does love the spotlight, “but in fairness, not as much as the spotlight loves me.” Teddy and Amy have words about Teddy’s deception, with Mom asking, “When did you stop loving me?” But no real punishments are doled out as the two eventually apologize and make up.

Bob, meanwhile, hunts for an on-the-loose anaconda—in part to impress son Gabe. It doesn’t really work, though, since he can’t help but run away scared at one point. Gabe, for his part, confesses that he’d rather Dad be a “live coward than a dead hero.”

Bob jokes about someone needing to change his diaper. Teddy stage-whispers to PJ, “I didn’t think we’d have to worry about this for years!”

Teddy has a date with a “totally hot” swimmer named Evan. (Amy understands her interest when Teddy shows her a picture of him in a bathing suit.) Turns out, though, this dreamboat is a nerd who plays Pokéo, a Pokémon-like card game that Gabe likes too. Gabe teaches Teddy the game, and she pretends to enjoy it in order to get closer to Evan. After she joins him in a Pokéo “live-action role-play” in the park, though, she decides that Evan and his friends are too silly for her. She tells Charlie in a video log, “Don’t pretend to be someone you’re not just to impress a guy.”

Amy fakes an eye injury and blackmails a doctor in order to stay hospitalized overnight to get some peace and quiet. While making a public speech, Bob jokes about heavy drinking. Later he tries to re-record the speech to lie to Amy and films himself thanking her in it, something he hadn’t done before. PJ serves as the cameraman, and Bob says to Charlie, “Let’s help Daddy deceive Mommy.”

Overworked, sleep-deprived Mom and Dad wander around with dazed looks on their faces and baby talk on their tongues. Weary of her parents’ incessant discussion of “oogly-googlies” and “poopy-woopies,” Teddy suggests that they go on a date. So off Mom and Dad go for some fun. “But not too much fun,” Teddy cautions. “We have enough kids already.”

In their absence, PJ loses Charlie during a stroller mix-up. (He was flirting with a girl pushing an identical stroller, and the two get switched). Panic ensues, as does madcap pursuit of the girl who unintentionally “babynapped” Charlie. The kids manage to make things right without, they think, Mom and Dad being any the wiser. But it’s hard to fool Mom, and the kids learn a lesson about the futility of trying to “put one over” on her.

Along the way, Gabe practices a magic act that involves smashing dishes at home (accidentally) and at a restaurant (on purpose). A fat man in a superhero outfit demands money from the kids. Toilet humor includes visual evidence of a baby peeing and the exclamations of “do-do,” “baby parts” and “butt.” 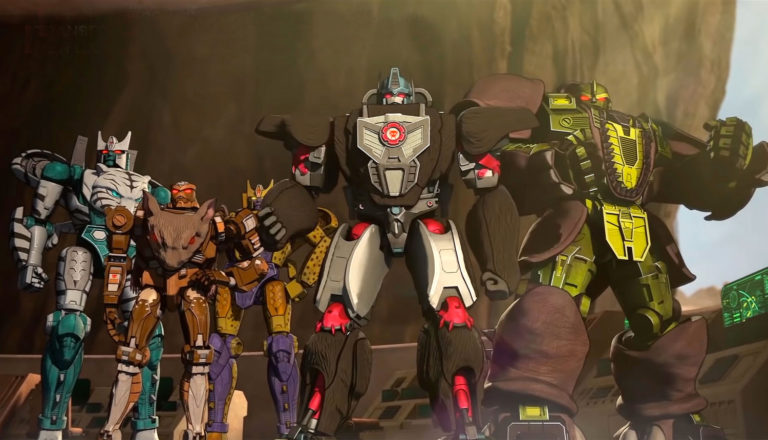