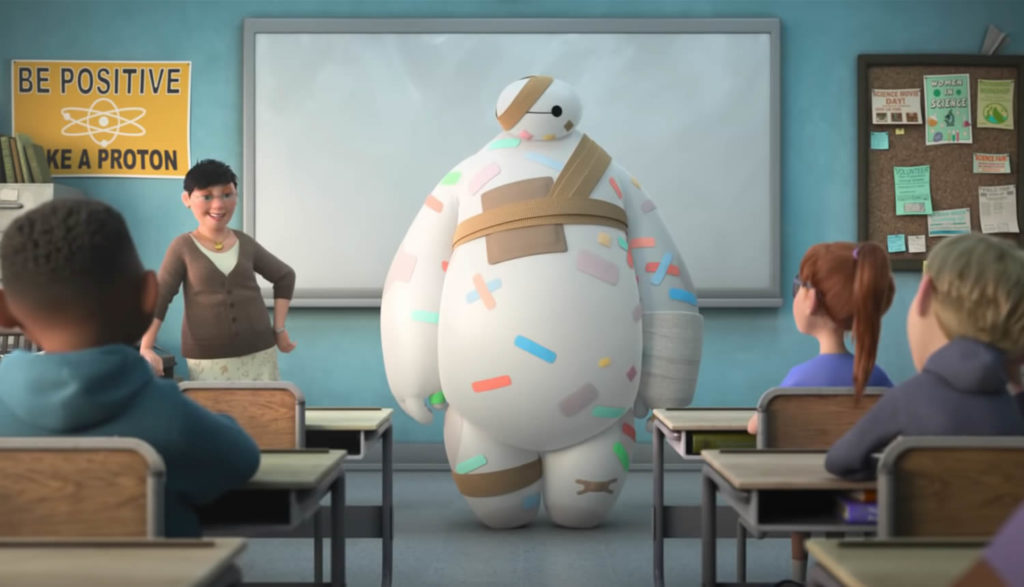 In 2014, the medical robot Baymax saved the day in Big Hero 6, when he teamed up with Hiro and friends to stop a villain from hurting others. After all, preserving human life is a core feature of Baymax’s programming.

Well, there aren’t any villains to take care of anymore, so Baymax spends his days zooming around San Fransokyo finding people to medically assist. Whether it’s helping a woman with her joint pain or dislodging a wireless headphone from a cat’s throat, Baymax is saving the day in smaller ways—and he’s building relationships as he does it.

It’s no secret that Disney is looking for ways to incorporate its progressive ideals into its shows—we’ve covered it before. According to leaked internal Zoom videos, Disney has embraced a “not-at-all secret gay agenda” that includes “adding queerness” to kids’ shows.

That seems to be true for Baymax!, Disney’s newest TV series featuring everyone’s favorite medical robot. And as Baymax travels across San Fransokyo in his effort to help people, he’s meeting plenty of animated characters who are helping Disney push that agenda.

In one episode, Baymax helps a man grow more confident in cooking with new foods—which, in turn, gives him the confidence to ask another man out on a date. In another episode, Baymax must help a young girl obtain menstruation products, and a deep-voiced person wearing a shirt with the colors of the transgender flag helps him to choose the right product.

That’s not to say that Baymax! is a bad show. Many of the episodes in Baymax! are quite sweet as Baymax helps his patients not only with their physical injuries but also with their emotional and relational concerns. We see a woman learn to enjoy once more the things her deceased husband enjoyed, for instance. Many similarly sweet moments can be found throughout the six-episode season.

However, the show’s LGBT content will give many parents pause.

And parents will want to know that one of the episodes focusing entirely on menstruation, a subject they may not yet be ready in approaching with their young sons or daughters.

Baymax’s primary concern is making sure his patients are satisfied with their care. And while Baymax provides more than satisfactory physical care to the show’s patients, many viewers may not feel that Baymax! has provided them with the same treatment.

Baymax helps the elderly Kiko overcome her resistance to using a community pool.

Kiko cracks her back when trying to pick up the mail. Baymax sprays Kiko with water against her will.

Baymax assists Cass in running her café after Cass sprains her ankle.

Cass trips over a stool, causing her to break plates and sprain her ankle. Cass also trips a second time, making her injury worse. Cass’ cat licks its rear.

Baymax helps Sofia obtain menstrual products after she gets her first period directly before the school talent show.

Baymax references menstruation, and Sofia tells him that she’s gotten her first period. Baymax buys tampons and pads at a store, and a person wearing a shirt with the transgender flag on it assists him. Sofia says that she will “kick butt.”

When Baymax informs fish vendor Mbita that he has developed a fish allergy, Mbita must learn to adapt his business.

Mbita speeds through traffic. Mbita asks another man on a date with him.

Baymax chases down Yachi the cat after it gets an electronic headphone stuck in its throat.