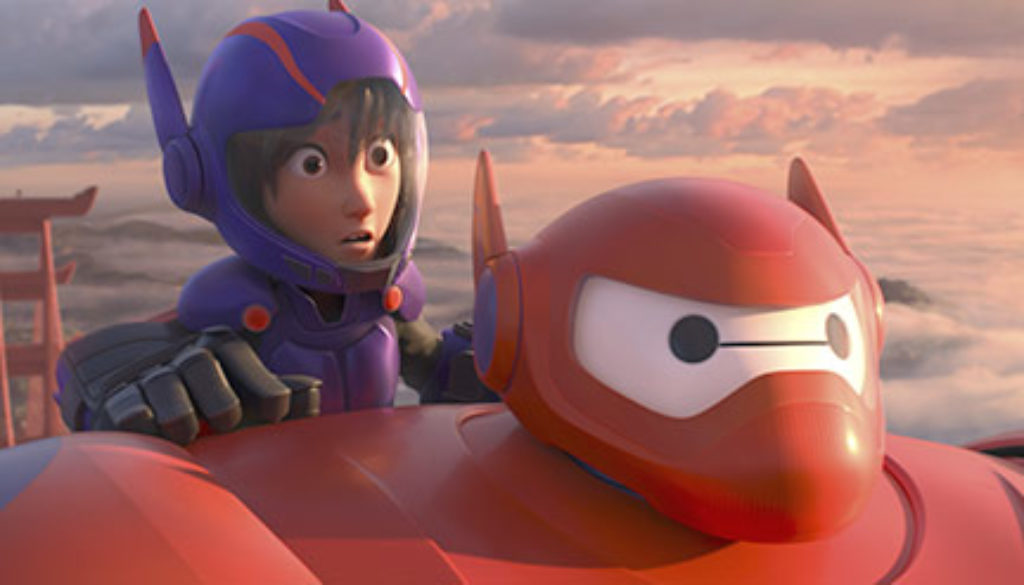 Hiro Hamada is a pretty brainy kid. He’s only 14 and already a high school graduate. But his big brother Tadashi still isn’t sure Hiro’s really living up to his full potential. All the teen’s been doing lately is spending time entering homemade robots in back-alley battle-bot tourneys.

He needs to go to college! He needs to do more with his big brain! So Tadashi (they lost their parents years earlier) takes Hiro to the University of San Fransokyo science lab to get him interested in “real” science. It works. For a while. But then Tadashi is killed in a fiery accident, and Hiro withdraws into grief and depression.

Now it’s up to Tadashi’s invention—an inflatable, balloon-like, health care robot named Baymax—to bring Hiro back to life. And when Baymax indirectly helps prove that Tadashi’s death wasn’t so much an accident as the result of a nefarious plot, Hiro is spurred into action.

He starts out by giving Baymax some crime-fighting upgrades. Then he gathers together some of Tadashi’s former science whiz-kid friends for a little heroic backup. And together they all set out to vanquish evil everywhere as a brand-new superhero team called … Big Hero 6!

Doing all you can to help others is a prominent theme that runs throughout this film. Tadashi takes the lead, saving his little brother from a gang of thugs and inspiring him to look at problems from a new angle. When he hears that somebody’s trapped in a burning building, he says, “Someone has to help!” And he charges in—losing his life in the process. Eventually, Hiro learns what it takes to make that same kind of self-sacrificial choice.

Hiro’s new friends—Go Go, Wasabi, Honey Lemon and Fred—all step up to help, too. And it’s Baymax who actually calls them in to buoy Hiro’s spirits. Baymax looks like a marshmallow man dreamed up by a balloon-animal sculptor. He’s “non-threatening and huggable,” Tadashi said. He can diagnose diseases and perform over 10,000 medical procedures. And he clearly reflects his creator’s ethos, evaluating Hiro’s vitals and doing whatever he can to set the boy on a healthy path. As Tadashi programmed him, Baymax is a character of great sensitivity and purity. “They could potentially save thousands of lives,” Tadashi says of his invention. In that vein, whenever Hiro is in danger of physical or emotional harm, the robot quickly uses his own body to warm and/or shield the boy. (Baymax later saves the entire Big Hero 6 team.) In fact, Baymax will only power down and stop his relentless quest of healing and protection when he hears the words, “I am satisfied with my care.”

It’s only when Hiro tinkers with Baymax’s programming that the super-inflatable sidekick becomes more focused on harming than healing. But all of Hiro’s friends instantly recognize that the change is negative and wrong. And they tell the teen so. [Spoiler Warning] Eventually Hiro realizes that to change the robot would be to cheapen and mar everything his brother intended. And to use the cuddly invention for violent revenge would be criminal. Near the end of the film we find out that the story’s villain was seeking revenge as well. And even he comes to see the folly of that course.

“Seatbelts save lives,” Baymax reports during a car chase. Fred laments not being able to spend much time with his dad while growing up.

During Tadashi’s funeral, we see little makeshift altars festooned with candles and pictures.

One time when Baymax scans Hiro, the robot believes the boy’s angst might be inflamed by his oncoming puberty. So he kindly begins explaining hormonal changes (body hair) and physical “urges” … before Hiro quickly changes the topic.

The “superhero” side of this animated pic opens the door to moments of peril. A kabuki-masked baddie uses millions of tiny robots to destroy streets, building fronts and vehicles. He smashes them into the ground and surrounding scenery with gigantic hammer-like force while chasing after our fleeing friends. And he uses the bots to create structures that suck an entire skyscraper and some surrounding cityscape, piece by piece, into another dimension.

After a frantic car chase, Hiro and his pals drive off a pier and are trapped inside the car as it sinks in the ocean depths. (They all fear they’ll drown before Baymax saves them.) In their turn, the Big Hero 6 team members use their skills—Go Go throws electromagnetic discs, Wasabi slashes with glove-mounted lasers, Fred breathes fire from his rubber Kaiju suit), Honey Lemon throws balls of combined chemicals, and Baymax shoots his rocket-powered glove—to create quite a bit of destruction. (Their actions are mostly defensive in intent.)

When Hiro reprograms Baymax and orders him to “kill” the kabuki baddie, things get pretty serious from the team’s point of view. Baymax’s eyes turn fiery red and he starts blasting and smashing at the villain with deadly intent. (It’s only when the rest of the team holds the robot back that they’re able to remove Hiro’s wrongheaded revenge-driven programming.) A huge fire is deliberately set and reportedly kills two people. At one point we believe Baymax has given up his “life” to save someone.

Someone is called a “bonehead,” and there is one use each of “darn” and “oh my gosh!” Fred calls out, “Holy Mother of Megazon!”

A low battery charge causes Baymax to act as if drunk, staggering around and slurring his words.

In the midst of all the Baymax activity, Hiro lies several times to his unsuspecting Aunt Cass. Hiro’s “prize money” for winning the underground bot battles is actually gambling profits. (He and Tadashi are arrested for participating.) Fred talks about wearing his underwear six days in a row.

Which of the following statements is true?

2) A lesson-filled Disney tale about a lonely, parentless kid and his robot friend.

Uh-huh, even though the movie’s trailers may have given you the impression that this is primarily a Disney-ish tale about an action-crazed kid and his balloon stand-in robot pal, the real answer is 5) All of the above.

Based very loosely on an obscure Marvel superhero series that mixes a Japanese manga story with an American comic book presentation, Big Hero 6 is a mélange of cultures, story styles and animation approaches. From the opening scenes in the future/fantasy city of San Fransokyo (a visually impressive combination of San Francisco and Tokyo), this pic quickly differentiates itself from Frozen and Toy Story and even your typical Marvel superhero feature.

Yes, it tells the tale of a group of science geeks who use their gifts to battle evil in a city-crunching finale. But it consistently delivers the sense that there’s more at play than that. It’s less about powered-up whiz-bang and more about “somebody has to help.” It’s less about superheroes and more about exploring the idea that a diverse group of friends become something of a makeshift support system—a family—for a kid who’s lost everything and everyone.

The cornerstone of that group, of course, is the guileless and completely sugar-free marshmallow Baymax. The service-focused robot comes to represent all of the positives that Tadashi was in Hiro’s life—helpfulness, pure goodness and self-sacrifice. And Baymax is also the onscreen character that will keep the kiddie moviegoers wrapped in a cushiony layer of rubbery warmth if and when the surrounding save-the-day action stuff becomes a little too bim-bang-boom-y.

Add in solid lessons of teamwork, friendship, dealing with grief in a healthy way, and exhortations on the emptiness of revenge. You won’t want to say it (because it would make Baymax power down), but you’ll likely find that you were well satisfied with your care.