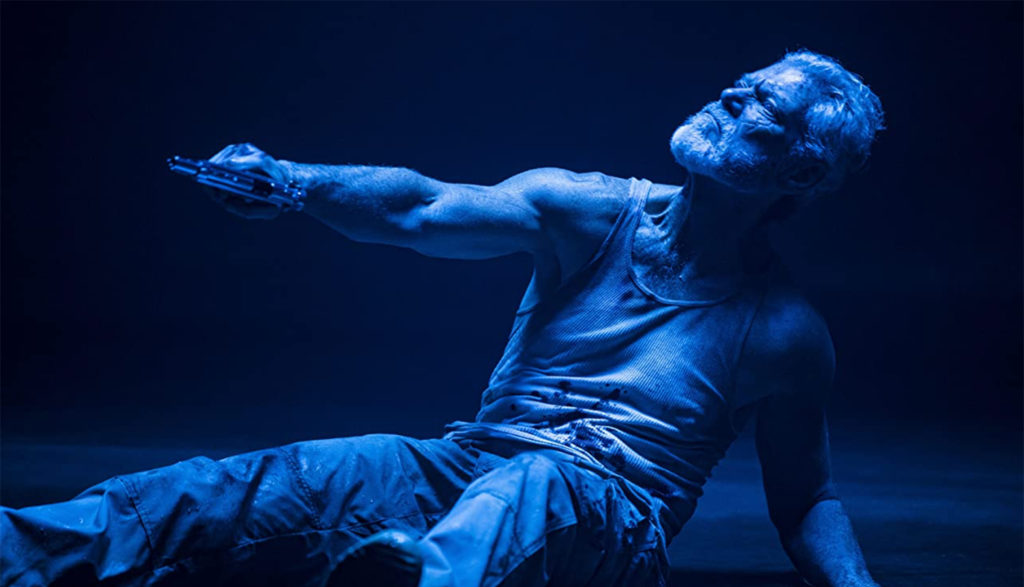 One look at Norman Nordstrom will tell you that this white-haired, heavily scarred and obviously blind ex-marine is a man who’s lived through some difficult stretches. Of course, you won’t get a chance to see much of Norman. He keeps himself pretty locked down and secluded away in a big old house off the beaten path.

In fact, other than accepting deliveries from Hernandez—a local delivery woman who, herself, is a former Army Ranger—the only time you’ll even catch a peek at Norman is when he’s in some nearby woods teaching his daughter Phoenix survival skills.

Some may wonder how this elderly man even has a daughter as young as Phoenix. He’s got to be in his 60s and she can’t be more than 11 or 12. But that’s a story not shared. He homeschools her, teaches her all she needs to know and keeps a pretty tight rein on her life, too.

Perhaps Norman has good reason for hisclosed-off ways. After all, the world is a dangerous place. And the one time that he eases the rules a bit and lets Hernandez take his daughter into town for the afternoon, the young girl catches the eye of a local thug and his crew. And they track Hernandez back to Norman’s place.

Oh, and then they catch that former Ranger off guard and cave in her skull with several brutal hammer blows.

What does this pack of rabid, scruffy, tattooed hyenas want? What do any predators want? Prey. And an old man and a young girl are just the kind of morsels they like to have served up. Norman may look like a tough old bird. But he’s blind and stumbling around. What’s he gonna do in the face of five or six strapping, ruthless thugs?

Well, Norman and Phoenix may both have a few moves up their sleeves that these guys aren’t expecting. This tough old bird might be a little difficult to chew.

We find out that Norman carries a great weight of guilt for his many past wrongs, including murder and rape. And his connection to Phoenix isn’t what it may seem to be, either. All that said, he takes on the responsibilities of a father and protector as best he can and gives everything he has in the process.

Phoenix, the one innocent in this whole messy story, longs for the truth about her family. Eventually she realizes that—in spite of lies told and the horrors of their situation—Norman is the closest thing to a parent she’s ever known. And after Norman admits how he has wronged her and tells her the truth, Phoenix gives him the one thing he doesn’t believe he deserves: forgiveness.

Norman tells Phoenix to never take anything for granted or “God will take it away.” She asks him, “Is God bad?” “God is fair,” he replies.

A woman wears a low-cut top.

This is a gory film that revels in the grisly, bone-protruding carnage. We see several men and women pounded brutally with a hammer—caving in and crushing their faces and skulls. A man is blown up in a room filled with flammable gas. Then the camera examines his fried and seared skin. A woman’s arm is hacked at repeatedly with a machete until the muscle and bone finally give way. People are shot at (including Phoenix) and several are killed. One wounded man gurgles and slowly dies as his throat wound gushes blood.

A dog is shot and a man digs into the wound to pull out a bullet. Men smash panes of glass, being cut and lacerated in the process. After being hit by a sharp tool, Norman glues the oozing sliced flesh back together. Then he uses the same glue to seal off a man’s mouth and nose. Another guy then creates an air hole by shoving a screwdriver through the struggling man’s cheek. A man has a pitchfork driven through his foot, pinning him to the ground. Another man’s face is chopped up by a sharp-edged shovel. A woman is strangled and battered. Someone drowns but is revived.

Phoenix hides and locks herself in a metal box with air vents, but a thug begins filling the box with water and threatens to stick a live electrical wire in. Two houses are set on fire, one by tossed Molotov cocktails. A man and a dog are nearly consumed by the roaring blaze. Men fight and struggle repeatedly, bashing one another around, stabbing each other and slamming one another’s heads into walls and solid objects. Someone is fatally impaled on a machete.

We hear in news reports of a doctor who’s wanted by the police for abducting children and harvesting their organs. And later in the film it appears that Phoenix may become this man’s latest victim as he moves with a whirling medical saw to cut open her chest (before being stopped). A woman coughs and spits up blood. People fall from elevated heights and lay dead in a pool of blood.

Several members of a gang smoke cigarettes. And we see bottles of booze on a table and a bar top in the gang’s hotel hide out. Phoenix is chloroformed by a kidnapper. Later she’s given some juice with a knockout drug mixed in. Then, while on an operating table, she’s connected to an IV drip.

The gang of thugs is connected to illegal meth sales. A woman in their group is very sick, stating that the chemicals poisoned her blood and damaged her heart and lungs.

A man follows Phoenix into a gas station restroom and leers at her threateningly. A young child is abducted and kept prisoner for years.

In 2016’s Don’t Breathe, three troubled kids broke into the wrong tortured soul’s house. And the audience was kept tiptoeing along a razor’s edge as a blind ex-Marine turned the tables and unleashed his deadly skills.

It was something of a Death Wish-like film amped up on steroids, wherein the victim not only fights back, but becomes a horrifying monster himself.

Don’t Breathe 2 brings that blind, scarred monster back and attempts to give him a small slice of redemption by mixing him in with a gaggle of even bigger monsters set on bashing in skulls, tearing flesh and butchering whoever they can get their hands on. (Not to mention their desire to steal away an innocent’s bodily organs.)

But whereas the first pic at least served up a dash of tension with its bloody banquet, this one is just a gruesome, eye-gouging, hack-me-with-a-machete smorgasbord.