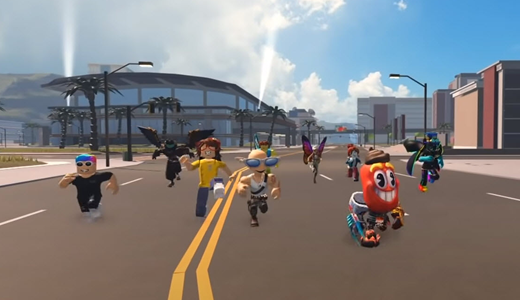 There’s a war going on. And some of the battlefronts can appear to be the most unlikely places.

You’ve heard of Roblox, right? If you have kids you probably have. It’s an online game creation system—a digital playground, if you will. In this space, and with its free software, creative minds can craft pretty much whatever they desire: intricate gaming challenges; large buildings and structures; landscapes; clothes; artwork; happy little characters and activities; you name it.

Lots of kids jump online and settle for creating their own little blocky-headed avatar and then exploring all the many wonders that others have learned to construct. And there’s oh-so-much to explore and oh-so-many people exploring and creating. The whole shebang, which started in 2006, has now grown to over 150 million active monthly users. I mean, think about that. That’s the equivalent of the population of Russia! And they’re all piling in and playing and creating on a regular basis.

Though Roblox doesn’t disclose the ages of its users, the site’s creators have said that the majority of users are under 18. In fact, it’s estimated that at least half of all U.S. kids ages 16 and under use the platform. In December of 2017, Comscore collected data from Roblox and found that kids between the ages of 5 and 9 spend more time playing Roblox than doing anything else online.

But here’s a dirty little secret: People playing in Roblox’s sandbox aren’t all there for carefree fun and games. Thanks to the fallen nature of mankind—and the fact that today’s teens tend to have more free time than any other group in history—the shadowed corners of the site hold areas and games that involve sexual activities that no 5 to 9-year-old should ever be subject to. It may be hard to imagine if you’ve ever seen the blocky characters on the site. But it’s happening. And trust me, you don’t want pictures.

Now, don’t get me wrong, I’m not suggesting that the creators of Roblox aren’t fighting back. The fact is, Roblox has been waging a technological war with some of its own users for years now. And the site has been praised by child safety advocates for being dedicated to safeguarding its young users. They maintain strict rules and use AI search systems to root out people who abuse their policies when it comes to things such as engaging in sexual behavior, cyberbullying and discrimination. But problems still happen.

The above mentioned sexually focused meeting places may be taken down just as fast as they show up, but they still keep showing up. And though users can’t communicate within Roblox about any of their sleazy creations, they can use gaming chat tools such as Discord to get the word out. The players/hackers behind it all are regularly exploiting the system and figuring out how to manipulate games, upload explicit content and introduce foul language. And there are other forms of abuse in the mix, too.

In 2018 a young girl’s avatar was grabbed and sexually abused by some online idiot who thought it would be great fun to create blocky havoc on a predominantly kids’ site. Fortunately, the girl’s mother was nearby when the online attack took place.

“Words cannot describe the shock, disgust, and guilt that I am feeling right now, but I’m trying to put those feelings aside so I can get this warning out to others as soon as possible. Thankfully, I was able to take screenshots of what I was witnessing so people will realize just how horrific this experience was. Although I was immediately able to shield my daughter from seeing the entire interaction, I am shuddering to think of what kind of damage this image could have on her psyche, as well as any other child that could potentially be exposed to this.”

The creators of Roblox publicly apologized for the online abuse and immediately took steps to ban the offender and redouble the site’s security efforts.

The point to take away from all this, however, is simple: no matter how vigilant a company may be in trying to safeguard users, it’s ultimately up to you, Mom and Dad. We live in a wonderful time that offers all kinds of creative opportunities and lots of potential fun. And while sites like Roblox may be doing what they can to protect your children, they can’t do everything. They can’t stop it all.

On the other hand, slamming the door on every online bit of fun isn’t necessarily going to get the job done either. Being safe takes work on all sides: It requires online safety features; wise parental discernment; good, open communication with your kids; and it demands keeping game play and other online activities out in the open where everybody can see them.

You may consider that a hefty list. And quite frankly, it’s not always easy. But few wars ever are.