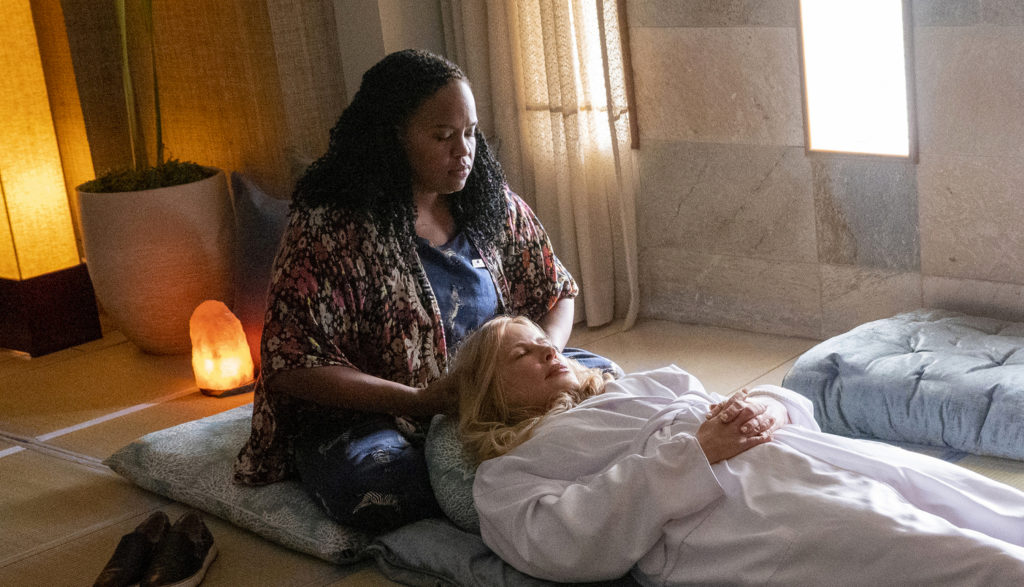 Welcome to the White Lotus resort, where the water is clear, the beaches are pristine, and the devoted staff is always ready to serve.

The scenery may be gorgeous, and the employees do put on a pleasant façade to cover their resentment of the guests. but no one who checks into the hotel is exactly what they seem. Each person who steps off the boat and onto the island brings their baggage with them, physical and emotional. And as their stories begin to intersect, the shadow of something much darker begins to shroud their week in paradise.

It’s a new week at the White Lotus, and it brings a boatful of new guests—each with a unique story to tell.

Shane and Rachel Patton are newlyweds embarking on their honeymoon and riding the high of marriage … only Rachel is beginning to wonder if getting married less than a year after meeting might have been a bit too soon. Tanya McQuoid is a wealthy middle-aged woman who’s still struggling with her mother’s death, and who copes with her grief by developing a bizarre obsession with the hotel’s female spa manager. The Mossbachers are a seemingly stereotypical nuclear family: mom Nicole is a company CFO, and teenage siblings Olivia and Quinn can’t stay off their phones. Oh, and their dad Mark thinks he might have testicular cancer.

It’s not just the guests who have issues. Armond, the manager of the hotel, has to maintain a consistently upbeat and helpful attitude. But in reality, there’s nothing he’d rather do more than give each one of the stuck-up, self-entitled visitors a piece of his mind. “You have to treat these people like sensitive children,” he tells new trainee Lani—who happens to be on the verge of going into labor, unbeknownst to Armond.

No, nobody at the White Lotus left their problems at the door, much as they’d like to believe. And as they begin to interact, and their stories begin to intersect, their seemingly picturesque vacations begin to become more and more bizarre—unravelling to the point of murder.

The White Lotus resort may do everything in its power to maintain its pristine image, but the series that bears the same name certainly does not. HBO’s The White Lotus features sexual content and crude dialogue at almost every turn. We see graphic nudity, and profanity is frequent, along with references to drugs and alcohol. While violence isn’t an issue so far, we get hints that a murder will take place at the end of this vacationing group’s week, so it could easily appear in future episodes. With HBO, really anything is on the table.

The White Lotus juggles an impressive ensemble cast while also trying to combine the genres of comedy, drama, and mystery—with varying levels of success. What is does succeed at, however, is living up to HBO’s brand of showing anything and everything with barely a semblance of restraint.

Where The White Lotus goes from here remains to be seen. But wherever this MA-rated show takes its guests, there’s no reason to believe that the strongly objectionable content won’t follow.

A group of new guests arrive at the White Lotus, each with different intentions for their week at the resort. Over the course of their first day, each new arrival faces a personal issue, varying in severity from being put in the wrong suite to a potentially life-threatening medical diagnosis.

Olivia and Paula both wear crop tops that expose their midriffs, and Rachel Patton, a young newlywed guest, wears a very revealing bikini at the hotel pool. A character is briefly shown in her bra. Rachel and her husband Shane make out in bed, where clothes begin to come off. Olivia’s father, Mark, thinks that his testicles are enlarged and is afraid he may have cancer. And as he focuses on that area of his anatomy, so does the camera—graphically.

Belinda, the hotel spa manager, helps a guest work through her grief and anxiety by reciting a spiritual mantra and chanting in Sanskrit. Lani asks her husband to pray for her. Armond, the hotel manager, refers to the size of the ocean waves as “biblical.”

While making assumptions about the other guests, Olivia and Paula guess that Shane snorts Adderall while at work. Armond offers daquiris to the new arrivals, and wine is served at dinner. Olivia and Paula vape outside the hotel. Foul language is also frequent; the f-word is used nine times, the s-word used three, and God’s name is taken in vain 13 times. Other profanities such as “a–” and “d–k” are heard as well.