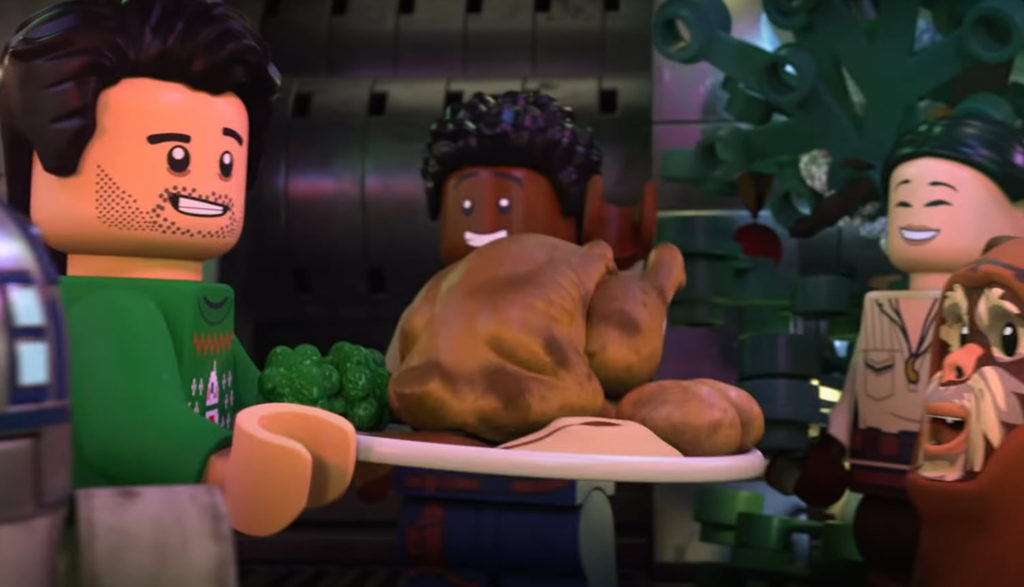 Long, long ago, in a galaxy far … well, this galaxy, actually, the near-mythic Star Wars Holiday Special was televised on CBS.

It was mythic for all the wrong reasons: Bea Arthur singing. Harvey Korman in drag hosting a cooking show. Jefferson Starship showing up for unknown reasons. It does boast the first appearance of legendary bounty hunter Boba Fett, but other than that, it opened up a big can of “Huh?” Writing for NPR, Glen Weldon described a holographic acrobat performance in the midst of the special as “20 percent Cirque du Soleil, 20 percent Studio 54 and 60 percent the very concept of cocaine.”

It was so bad that Star Wars creator George Lucas himself essentially expelled it from the Star Wars universe—the one in which Jar Jar Binks still has a place of honor, might I remind you—and it has never (officially) been rebroadcast or redistributed or re-anythinged again.

Canon? Lucas wanted to shoot this thing out of a cannon.

But the folks at Disney+ and LEGO didn’t, apparently, get the holographic memo, and they’ve now resurrected the ever-so-brief “tradition” of Star Wars holiday specials. And while it doesn’t feature Harvey Korman as a four-armed Martha Stewart, this reboot of sorts is just as memorable in its own holiday-special way.

Use the Remote, Luke!

Like the original 1978 special, LEGO’s version is predicated not on Christmas, but on Life Day—a very important holiday throughout the Star Wars galaxy, but especially on Chewbacca’s home planet of Kashyyyk.

This time around, Chewie and Star Wars’ newest heroes—Rey, Finn, Poe Dameron and, charmingly, Rose Tico (voiced by the actor who plays her, Kelly Mari Tran)—head back to Kasshyyyk to hang out with Chewie’s hairy fam.

Alas, Rey doesn’t feel much like celebrating. See, she’s struggling to train Finn in the ways of the Force. So she travels to an ancient Jedi temple (along with BB-8) to snag some inspiration.

Instead, Rey finds a mysterious crystal that allows her to travel through time—going to events that happened longer, longer ago, and meeting several LEGO versions of Luke Skywalker, pops Anakin, Obi-Wan Kenobi and … well, you get the idea. They meet each other, thanks to the crystal’s ever-more-expansive time-traveling vortices.

Oh, Emperor Palapatine is on hand, too, and boy, does he want that little crystal for himself. If he could get his hands on it, the wrinkly old cuss could probably keep Darth Vader from throwing him down that shaft. And wouldn’t that be a Life Day surprise?

Laugh, or Laugh Not. There Is No Cry.

So let’s get any potential concerns out of the way first.

The LEGO Star Wars Holiday Special takes place in the LEGO Star Wars Universe, meaning that 1) the Force is a thing, and 2) Christmas is not. (We do see several ugly Life Day sweaters, however, and hear vague references to “Life Day miracles.”)

But beyond that … well, there’s not much to talk about here, content-wise. Viewers will see some frenetic lightsaber battles, blaster shootouts and a few uses of Force lightning, but almost everyone survives and seems relatively intact. (Darth Maul does make an appearance after he’s been apparently severed in two, a la Star Wars: The Phantom Menace, but he seems no worse for wear in his LEGO form.) Sensuality is rarely an issue for LEGO figures. And while I suppose it’s possible that, say, Greedo whispers a swear word in his native Rodian, I sure didn’t pick up on it.

And while Life Day isn’t Christmas, it still boasts some nice messages of its own. It’s all about spending time with friends and family. And airing in an era where that’s harder for us non-LEGO people to do, it’s nice to see someone enjoying themselves.

The special may have a greater affinity for Easter than Christmas—as in Easter eggs. If you’re not seeing a clever reference to the Star Wars universe every 15 seconds or so—from Luke Skywalker sporting a blue-milk mustache to Baby Yoda’s predictably-adorable cameo—you’re missing something. (I’ll not give most of the jokes away, but here’s one of my favorites: When Lando Calrissian unpacks a present from Admiral Akbar, the latter shouts, “It’s a wrap!”)

Obviously, much of the humor will be lost on people unfamiliar with Star Wars. But what are those people doing watching a LEGO Star Wars Holiday Special, anyway? For those in the know, this Disney+ hour-long special is pretty funny, lightly sweet, super family friendly and a 12-parsec improvement over its predecessor.

Not that the latter set a particularly high bar, but still.