For most of us, the line between work and the rest of our lives can get pretty blurry these days. We bring work home with us. We bring home to work with us. We telecommute from the dinner table, text the boss from the kid’s soccer game, run spreadsheets through our mind at breakfast. COVID didn’t help, certainly. But let’s be honest: Those lines were blurring long before we were going to work on Zoom.

(And if your job is, like, watching television shows? Well, don’t even get me started.)

But have no fear! You can separate your job from home! You can do your work and have a life, too!

All you need is just a bit of irreversible brain surgery, and you’ll never bring work home with you again.

Admittedly, the procedure is still pretty rare (even in this Apple TV+ world) and freighted with controversy. But for Mark Scout, the procedure was welcome. His wife died not long ago, and he was—is—consumed with grief. But instead of suffering 24 hours a day, he suffers for 16, give or take. For eight hours at work, Mark doesn’t know he was a husband, much less a widower. For that eight hours, he can lose himself in macrodata refinement at Lumon Industries.

Mark’s supportive sister has her doubts about the procedure. “I just feel like forgetting about her for eight hours a day isn’t the same thing as healing,” she says. But Mark’s happy with his decision. Or, at least, he thinks he is. Admittedly, it’s not overly stimulating work. But it’s important work—and so sensitive that only people who undergo the severance operation are allowed to do it. And again, it’s better than the alternative. Why, Mark just got a promotion—one that he might be inclined to brag about to his sister.

If, y’know, he knew he got one. Because the surgery works the other way, too: Mark has no memory of his work once he leaves each day.

But while Mark claims to be happy with his choice, he’s beginning to suspect that something strange is afoot—or, rather, something even stranger.

Mark received that promotion only after his best friend, Petey, left Lumon under rather mysterious circumstances. And when Petey sidles up to Mark at a local bar—outside work—and re-introduces himself, Mark realizes that if this “Petey” is telling the truth, perhaps the severance procedure isn’t quite so permanent as thought.

“Nothing down there is what they say,” Petey tells Mark of Lumon, and he encourages Mark to follow up. And Mark surely will. But what doors will he unlock? What secrets will he uncover? And will Mark ever be the same again?

Apple TV+’s Severance is directed by comedian Ben Stiller and stars Adam Scott, perhaps best known for his work on the sitcom Parks & Recreation. But don’t let that pedigree fool you: It’s classified as a “thriller” (which also seems to miss the mark rather badly), and what laughs it offers are more of the dark, broody, sepulchral kind. Indeed, showrunner Dan Erickson says that the series was born from his own office-bound, repetitive-task misery.

At one point, Erickson remembers thinking, “Man, I wish I could just totally not experience the next eight hours. I wish I could disassociate and just have it be 5 and suddenly I’m going home,” according to Apple Insider.

And indeed, Severance hits the bullseye it seeks to hit: It turns repetitive drudgery into edgy unease. It’s simultaneously taut and ludicrous, grief-stricken and creepy. If it was a work of art, it’d be an M.C. Escher sketch with an assist from Edvard Munch’s The Scream. If it was an urban legend, it’d be Slenderman with a smile painted on.

With Apple TV+ stringing the hour-long episodes in weekly fashion, it’s hard to say where the show might swing. We see a flashback of the severance procedure, and it’s possible that some romance (both traditional and same-sex) may be in the offing. But given the office setting, it seems that we’ll not see tons of blood or skin. Severance seems to snag its TV-MA rating primarily for language—including f- and s-words. Mark drinks heavily outside the office. And because of its curious, existential setup, some spiritual themes can be in the offing, too.

But tonally, the show comes with other cautions. This is not a nice show—one that you flip on mindlessly that helps you forget about your own difficult workday. Severance takes you on an unsettling ride—one with few thrilling loops and dips, but the strange turns may make you feel a little queasy anyway.

Mark Scout—known at work simply as Mark S.—receives a promotion after his best friend, Petey, mysteriously departs. His first duty is to orient Helly, who will fill the resulting vacancy. Since Helly’s memories before she took the job have been surgically separated from her post-severance work experiences, that’s no easy job. After work, Mark attends a non-dinner dinner party being thrown by his sister, and he goes to a bar where he meets a total stranger who’s also his best friend.

Helly wakes up on top of a conference table with no memory of who she is or how she got there. She initially only talks with Mark via speaker. Shortly after Mark walks into the conference room to continue the orientation, she chucks that speaker at him, causing a cut on Mark’s forehead. (Lumon, the company they both work for, leaves a gift card on Mark’s car as recompense, but lies about how he received the injury. Mark, now outside work, accepts the lie as fact.) There’s a joke revolving around someone’s larynx being torn out. Mark mentions that on his first day of severed work, he threatened to kill the person who led his orientation.

Inside work, Mark’s boss (Peggy) says that her mother was an atheist, and she relates one of her mom’s favorite adages: “The good news is that hell is just the product of a morbid imagination. The bad news is, whatever humans can imagine they can usually create.” (Outside of a work environment, Peggy claims that her mom was a Catholic, and talks about how kids needed a certain amount of sleep for the angels to bless them.) Helly asks Mark whether she might be dead or in hell during her disorienting first day. (She also speculates that maybe she’s “livestock,” bred to be eaten by an alien race.)

Mark drinks wine and beer at home, then goes to a bar and drinks more. His sister jokes that Mark and his father had a flask engraved with the words, “Whiskey is life.” Someone comments that Mark looks hung over, while his sister tells him that he smells “like a distillery.” Characters say the f-word seven times and the s-word six. We also hear “h—,” “d–n” and “g-dd–n.”

Helly is slowly learning the ropes of her new job (which is, she’s told, to compile and separate seemingly random numbers based on whether they seem “scary” or not). She’s not thrilled with the gig, but quitting is much harder than it looks. And it seems that leaving a note for the Helly who lives outside the workplace (known as “outtie” Helly) is impossible, as well. When she tries, alarms go off, and she’s nearly sent for correction—until supervisor Mark takes the rap for her and goes to the dreaded “break room.” Another macrodata processor, Irv, falls asleep at his desk and is sent for his own corrective action, and “outtie” Mark meets with Petey again and smuggles him into his house.

We see a flashback to Helly’s severance surgery. While it doesn’t seem to hurt at all, her scalp is opened and a doctor takes a regular power drill to the back of her exposed skull. A chip of some sort is inserted through the resulting hole and stuffed deep into the brain. (We see that part of the procedure just through a real-time X-ray, but the blood and bone of the surgery’s earlier chapter is painstakingly captured on screen.) Petey—who believes he’s the first person to reverse the severance procedure—is suffering really bad headaches and nosebleeds. At the end of the episode, Petey sees visions of his work self and seems to collapse in the shower—likely stunned, but possibly dead.

When he dozes off at his desk, Irv imagines black goo creeping over his cubicle walls and computer keyboard. He wakes up with a start before the goo can reach him. Dylan, yet another macrodata processor, speculates that the world outside has gone completely dystopian, and that the work they’re doing is intended to clear the oceans of eels and other unfriendly critters (so that humanity can live there). A painting depicts the founder of the Lumon corporation in Old Testament-like garb; he’s holding a whip and terrifying women, children and a ram. (It’s described by someone as “calming”.)

When “innie” Mark wonders whether Petey is in trouble or dead in the outside world, shadowy middleman Mr. Milchick reminds him that death doesn’t impact “innies”. “A life at Lumon is protected from such things,” Milchick says, and he suggests that Mark should feel nothing but gratitude for that.

When Irv is assigned to correction after his drowsiness, he’s sent to a counselor who tells him encouraging facts about his “outie” self, including that he is “skilled at kissing and lovemaking” and “attends many dances.” We see Petey shirtless in the shower. Outie Mark goes on a date, which does not go well.

During the date, the woman (a midwife) outlines some of the pitfalls of the severance procedure—including the fact that he could have another girlfriend at work and never know it. “Doesn’t that mess with your head?” she asks. “I think for some people, that’s the point,” he tells her. Mark gets a little drunk during the date, and he accosts some people protesting the severance procedure. After the confrontation, he heads home (his date having long departed) and pops open another beer.

Helly asks what makes the numbers scary. “Are the numbers bloody?” she asks. “Do they chant?” Characters say the f-word seven times and the s-word four times. We also hear “a–,” “d–n,” “h—,” “pr–k” and “p-ss”. God’s and Jesus’ names are both misused once. 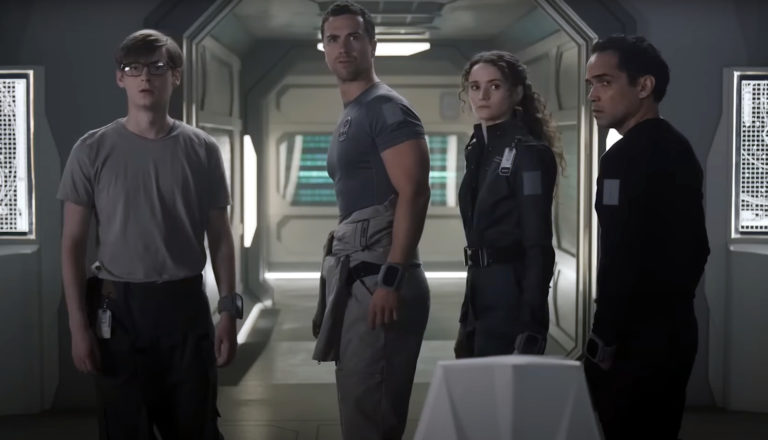 The crew on this Syfy show may eventually reach the alien planet it’s aiming for. But it carries plenty of problems, too. Paw Patrol’s Rubble sets out with his family on a new construction adventure in Rubble & Crew.