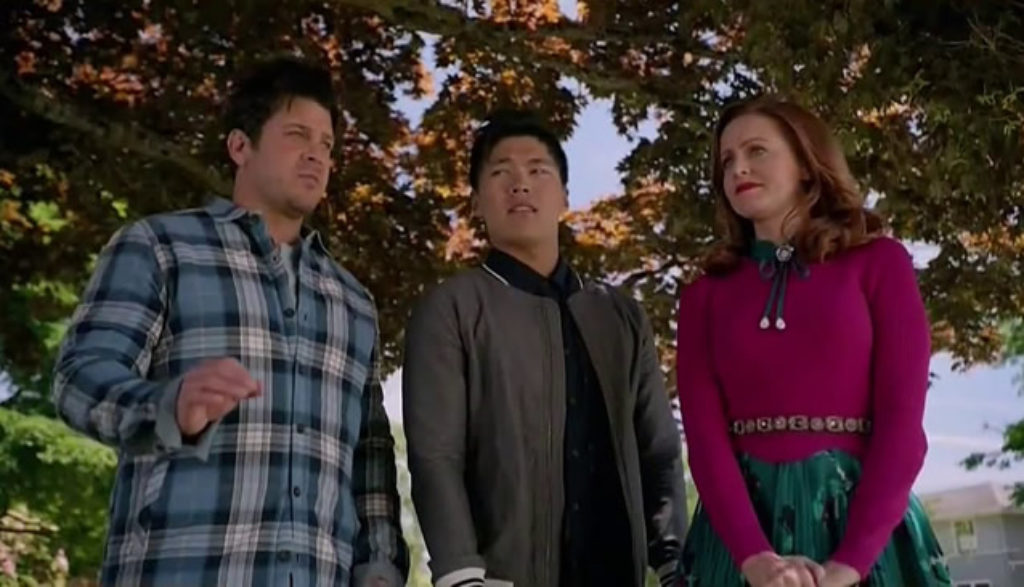 At first blush (or is it hush?), TNT’s The Librarians sounds just about as exciting as a show called The Accountants or The Telemarketers would. I mean, what would they be doing during an average episode? Shushing people? Dusting bookcases? Maybe collecting overdue fines on a particularly exciting episode? You’d expect that the only place a program titled The Librarians might have a shot is Norway, where millions have taken to watching knitting competitions.

But, of course, this is America, and these are not your ordinary librarians. These guys specialize in the Danger Decimal System.

The Librarians is the progeny of the TNT television film series The Librarian, wherein one Flynn Carsen (Noah Wyle) protects and retrieves spectacularly magical artifacts. Three made-for-TV movies have been made, but TNT’s viewers apparently wanted to (ahem) check out more.

Enter The Librarians, about the folks who staff a magical library branch in Portland, Ore. Cassandra is a giddily optimistic mathematician who also (conveniently enough) has a photographic memory. Christian Kane is a rough-hewn genius—an art expert who (also conveniently enough) is fluent in pert near every language known to man. Ezekiel’s a mostly unapologetic thief who knows his way around a computer far better than you do. A mysterious dude named Jenkins serves as the annex’s caretaker, serving as regular scene-setter and explainer.

Their jobs are a bit more dangerous than that of the standard librarian, we quickly learn. Which is why they need their no-nonsense Guardian, Col. Eve Baird, to protect them from various shady outlets who have a hankerin’ for, say, Judas’ chalice or Aladdin’s lamp or, hey, even Santa’s hat.

Sound silly? It is! And, thankfully, it’s meant to be. This is Agents of S.H.I.E.L.D. doused in whimsy, a blend of The A-Team and The Odyssey. Forget those prestige dramas on AMC—this TNT show is all about having a little escapist fun. And it even offers a moral or two along the way.

Alas, like Pandora’s Box (which resides in the original library, incidentally), this program contains a few nasty surprises. While foul language is sporadic, it can sometimes be harsh. (An s-word showed up in one episode downloaded from iTunes.) Violence can be a bit bloody, too.

But the biggest issue may be the show’s premise, which encompasses a warehouse full of magical flotsam. Some of the items have pagan origins, straight from myths involving powerful and petty gods. Others have biblical roots, the meaning of which can be twisted or demeaned in the show’s lighthearted framework. Modern examples of “dark” magic (of, say, the Ghostbusters variety) are an inescapable part of every episode. Oh, and the library’s official Librarians tend to be immortal, too.

Also inescapable, though, is the fact that The Librarians is, even with its card catalogue full of issues, much quieter when it comes to content than most of its disruptive classmates on cable.

Nicole Noone, an immortal librarian whom caretaker Jarvis doesn’t trust a whit, has escaped from the library and is breaking into various tombs. Why? She’s searching for Koschei’s Needle—an artifact that might wreak unknown havoc in the world. Is she trying to save the world or use said needle for some nefarious purpose? The library’s staff is split on whether to trust her or not, but no matter: Another group of individuals seems determined to steal the relic before she gets it.

We see some religious elements in cemeteries and mortuaries, and a number of mourners get the shock of their lives when someone breaks out of a crypt. One character gets stabbed in the shoulder by a magical knife, nearly lethally; but that person is saved via some mysterious, immortality-transferring ceremony (that includes incantations and, oddly, a bunch of plants). We hear references to various mythological gods and demigods. Someone files away the Dead Sea Scrolls in the library. We hear references to Rasputin, who’s described as “holy man” that turned out to be a charlatan practicing black magic and sorcery.

Nicole and Baird, who is the library’s current Guardian, beat up a couple of Russian ruffians, choking them to apparent unconsciousness. (They don’t do it very well, though; the Russians soon wake up and sneak away.) Someone dies after jamming a knife into a pipe full of radioactive goop: His eyes and mouth glow blue before he vanishes bloodlessly. Punches land. Some people seem to wish for death.

Flynn expresses his eagerness to go bowling with Baird, making a crude (albeit unintentional) double entendre referring to his bowling balls. There’s a reference to Nicole’s “completely inappropriate” browser history. Champagne is quaffed. We hear “a–” once, “d–n” twice and two misuses of God’s name.

The Serpent Brotherhood kidnaps Santa Claus—a living avatar of humanity’s goodwill. Throughout the year, Santa collects goodwill and then, on Christmas Eve, gives it to the world en masse, providing hope for everyone to keep on truckin’—to “recharge the karmic battery, if you will,” Jenkins says. And Santa’s hat even seems to be some sort of talisman: It’s given to Ezekiel, who immediately begins giving away money and baking cookies. But we see that the jolly old elf has got some wicked tricks piled up in his big bag, like being able to slip into other historical guises, including Odin, “god of battle and death” (whom the show alleges is the true forerunner to today’s Santa Claus, not the Christian St. Nicholas.) He gets drunk at a bar, smashes a beer glass on his head and gets into a brawl (offscreen).

References are made to Christmastime violence. Knives are brandished. Someone falls out of a plane. The bad guys fire tranquilizer-like darts into Santa’s neck, poisoned by holly and mistletoe. Lamia admits to trying to kill a librarian. We see a man in an ambulance, covered in blood. He and a would-be suicide victim are saved by Santa’s goodwill spells, and a woman pours out a bottle of liquor because of Santa’s prompting.

A vague visual reference is made to a woman’s breasts. We hear one s-word, along with singular uses of “h—” and “d–n.” God’s name is misused a couple of times.