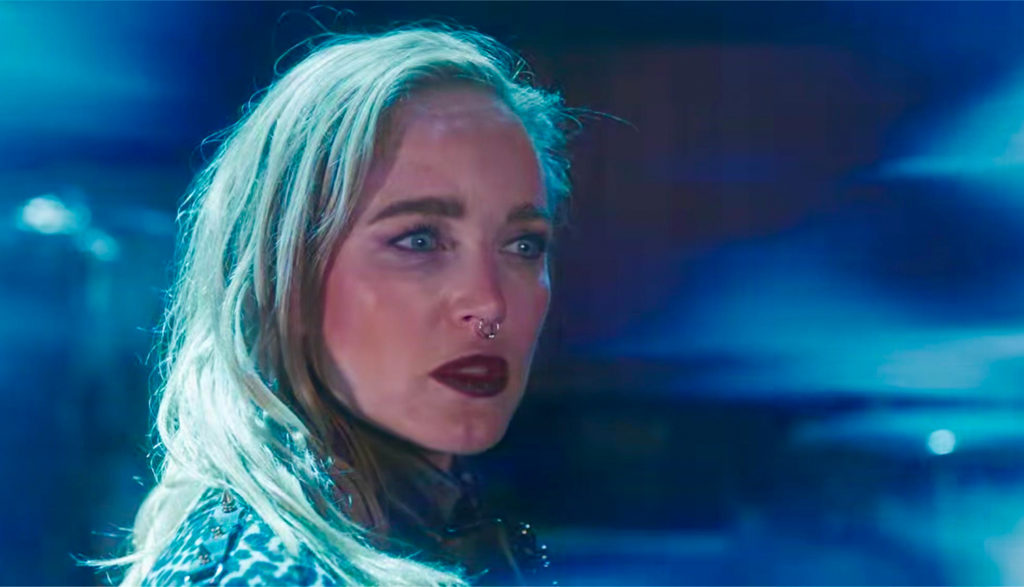 If I had to offer a quick thumbnail contrast between the cinematic universes of Marvel and DC, it’s this: Marvel’s stories are colorful and fun; DC’s are dark and brooding.

Obviously, thumbnail generalizations can be misleading. Marvel’s Avengers: Infinity War or The Falcon and the Winter Soldier can feel plenty grim. DC’s Superman is as colorful and optimistic as superheroes come.

But for the most part, DC digs dark. Its atmospherics seem predicated on its own grim knight, Batman; and Zack Snyder’s four-hour Justice League can sometimes slip into honest-to-goodness nightmare territory.

Even the lighter, small-screen iterations that form CW’s Arrowverse can lean into big issues and bleak worlds. Arrow, the (now departed) show that gave birth to the Arrowverse, is predicated on another mask-wearing vigilante that skulks in the shadows. Were these shows brighter and more escapist than, say, Christopher Nolan’s Dark Knight movies? Unquestionably. But they still like their dark nights.

And then you’ve got DC’s Legends of Tomorrow—featuring the zaniest cast of superheroes this side of The Tick. It’s a show that attempts to mash the vibe of Guardians of the Galaxy, Doctor Who and a zany fever dream into one cheap, strange package.

Hitchhiker’s Guide to the DC Galaxy

Granted, it’s not quite the same package these days. Just two characters—the sound-bending Sara Lance/White Canary and Mick Rory, a former criminal called Heat Wave by some—have been the only series-lasting staples. Others have come and gone and come again, which means the roster of Legends’ alumni could populate a small, very strange town.

Ready for the Season 6 makeup? Buckle up.

Nate Heywood/Steel, who can turn into his namesake metal, has served as the team’s muscle since Season 2. Demon-battling John Constantine hopped aboard the Waverider (the Legends’ time-traveling spaceship) sometime around Season 4. So did special agent/disgruntled clone Ava Sharpe, Sara’s girlfriend and kinda-sorta fiancée. Zari and Behrad Tarazi, a brother-and-sister team from the future, have both ceased to exist (in one way or another); but neither death nor a little space-time wrinkle can keep these siblings down. “Spooner” Cruz is the Legends’ newest member—drafted because of her ability to communicate with the myriad aliens the team encounters. Oh, and speaking of which, Gary Green—a one-time mild-mannered Time Bureau Agent—has been revealed as an alien himself. He took a cue from Superman himself and disguised his true nature with a pair of glasses.

It’s quite the kooky crew, and I think that’s exactly what the show’s creators wanted—something a bit off-kilter. And with the opportunity to raid CW’s wardrobe department for all those period costumes required in a time-travel caper, well, this might just be the weirdest superhero show since Harvey Birdman, Attorney at Law.

Weird is not necessarily analogous to good, of course, no matter how much cachet such a description might have at a Comic-Con convention. The whole effort feels a bit like a quirky-but-uninspiring low-budget show made in the mid-1980s. Admittedly, even cheap special effects have gotten better since I was watching The Greatest American Hero while chowing down cold cereal in my parents’ den … but the negative content has clearly gotten worse.

While Legends of Tomorrow has a mindless (some will say silly), kid-focused sheen to it, that’s a bit deceiving. Sure, it might not be as dark as Arrow, but there’s certainly no Batman-inspired “no kill” ethos here, either. People die. And even though very little blood splashes, audiences will hear quite a few sickening squirsh and shlooorp sounds accompanying the fatalities.

Problematic spiritual subjects spring up, too—as one might expect when John Constantine’s in the mix. And naturally, Eva and Sara’s relationship—which the show makes a pretty critical element in the story—might raise the eyebrows of many.

Then there are the story’s disappointing “life lessons.”

CW’s titular character in The Flash is as straight an arrow as you’ll find on the small screen these days, a hero who takes his hero-ing seriously. But in this motley ship of super-souls, the morality gets mushier. Is stealing a ship and killing folks justifiable in the cause of a greater good? Is it OK to employ bad guys in an effort to deal with a worse one? Is revenge just fine if the original offense was foul enough?

These are thought-provoking questions … that the show asks without ever seeming to realize that it’s asking them. Frankly, it’s far too concerned with finding a groovy leisure suit to wear in the 1970s to ever try to answer.

Most of the team travels to San Bernardino, California, circa 1955, to uncover an unsettling alien occurrence there. They’re surprised to discover that the extra-terrestrial presence seems to be connected with a fast-food restaurant’s secret sauce. Meanwhile, Sara and Gary land on another planet and sup with someone who appears to be Amelia Earhart.

The Legends go to San Bernardino because, in 1955, all of its townfolk were slaughtered by forces unknown (in what newspapers at the time called “The Massacre on Main Street”).

Could it have been self-inflicted? The sauce seems to drive people crazy and triggers near riots for more meat. Dozens of townspeople attack the burger joint like well-coordinated zombies, fighting each other over stray meat patties. One man breaks into a beef warehouse and gobbles whatever he can find before he’s beaten up and knocked unconscious. He later projectile vomits a LOT of secret sauce.

A couple of people are knocked out with new-fangled power mixers. A bug-like alien attacks and swallows a couple of people whole before getting zapped—fried by an electrical sign. Another alien seems to injure one of the Legends (we see a tiny wound on her wrist), but the impact of the injury waits for the next episode. Yet another alien is wiped off the Waverider’s windshield by a set of interstellar windshield wipers.

We hear several references to Sara and Eva’s relationship, and a few people talk about what sort of wedding the engaged women will have. Cruz, the newest member of the team, talks enthusiastically about killing aliens. Another legend, Zari, carries magical dragon ash with her, which can do everything from increase one’s sex appeal to render someone unconscious. Constantine seems to cast a magic spell (complete with incantations) and references something called the “Divination of Hor.” We hear about a troubled marriage. Characters say “h—” four times and “d–n” twice.

Rip and his band of time travelers land in 1975 in an effort to cut off Savage’s money supply and, perhaps, reclaim Carter’s dead body. That’s all while Kendra suffers from life-threatening debris in her bloodstream, which means Atom will have to dive into her veins to blast the bad stuff away. And that’s all while Mick and Leonard are convincing Jax to help them steal a massive emerald from a museum—an emerald that Leonard hopes to give to his father so the guy won’t be arrested two days from “now” in his own attempt at stealing it. (Hey, there’s nothing like committing a crime to keep someone else from committing a crime!)

Sara kills lots of hit men bearing cross-shaped scars on their necks. (There’s scant blood, but we hear her knives rip through flesh.) Savage draws a knife across the dead Carter’s throat—draining blood into a cup which he and his followers (who consider Savage a god) drink from. (The substance apparently gives even mortals the ability to live for another century or so.) People get punched and kicked and are sometimes knocked unconscious. Various weapons are fired. There’s talk of Sara’s resurrection and how it gave her “blood lust.” Savage talks about how he’ll also rise again.

Rip regrets not having the guts to kill Savage back in ancient Egypt. “Killing doesn’t make you a monster, Sara,” he says. “But having the chance to avenge your family and not taking it—that does.”

People lie. They say “h—” a half-dozen times, as well as “b–ch” and “bloody.” God’s name is misused a few times. We see cigarette butts and empty beer bottles littering a poker table. Leonard talks about his abusive father.