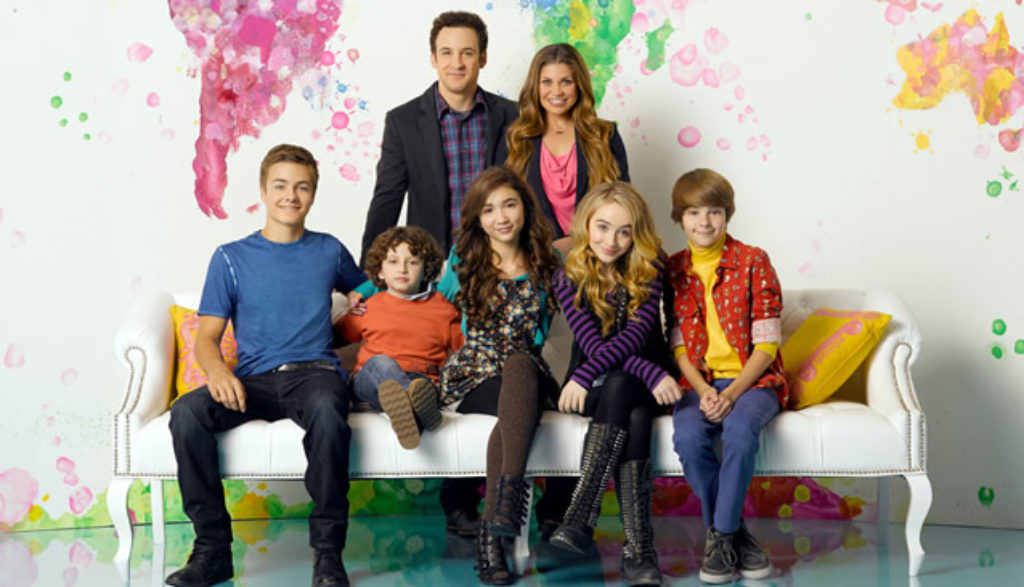 In 1993, a 12-year-old boy named Cory Matthews walked into John Adams Middle School for the first time and, in so doing, met the world. In the following years, scads of TV-watching kids saw Cory grow from an insecure middle schooler to a self-assured college student who married his longtime sweetheart, Topanga. ABC’s Boy Meets World, for them, became a cultural touchstone.

Life doesn’t freeze once a show’s cancelled, sometimes not even for the fictional characters. In the years since Boy Meets World aired its last episode (in 2000), Cory has grown up and grown older. In fact, he now teaches middle school history. And guess who’s in his class? Riley, his tween daughter.

Welcome to Disney’s Girl Meets World, a spinoff show that focuses on Riley and her best friend Maya as they enter a time of life when they begin to truly define themselves. Disney, clearly, would love to follow Riley for the rest of the decade, just as ABC did with Cory, tracing her development from middle school to college, from girl to woman.

And the House of Mouse does know a thing or two about developing sitcoms around growing kids. The year after Boy Meets World ended, Disney Channel introduced Even Stevens (starring a young Shia LeBeouf) and, the year after, Lizzie McGuire. That’s So Raven, Hannah Montana and the Zack & Cody shows were all subsequent hits, and the tradition continues now with Austin & Ally and Liv and Maddie, among others. These shows are as reliable as a dinner at Cracker Barrel, really: Nothing wildly exciting about them, perhaps, but generally tasty and, often, quite wholesome.

But Girl Meets World, if it follows the template of its predecessor, may have deeper aspirations. While most Disney programs feature nice but softball lessons about the importance of friendship and being yourself, Boy Meets World at times wanted to express what adolescence really looked and felt like—and, as such, it sometimes dealt with some fairly serious issues. Cory got drunk and was arrested. He and Topanga even faced infidelity (well, OK, a few stray kisses). Girl Meets World seems to want to blend the two sensibilities, but whenever you’re dealing with stuff like that, there’s always a chance that the morals the show teaches will differ from your own.

Maya and Riley are both a little boy crazy, too, so flirtations and romances are already part of the mix and will only intensify as their story matures. Lying and cheating and other such things are sure to dog their steps toward adulthood. And we’ll likely see lots of outlandish situations that you’d never want your own kids to duplicate when they meet the world.

Early on, we do see that Cory and Topanga are engaged parents, though. They love Riley and her younger brother, Auggie. They want what’s best for them, even when they can’t always figure out how to handle them (just like all the rest of us parents outside of TV’s tight confines). It’s nice that the series seems to be trying to tell kids that even when you’re at an age when you think you have all the answers, the adults in your life may still have some wisdom worth listening to—even ones who grew up on TV.

Riley and Maya start another year at middle school, this time as eighth graders—kings, now, of all they survey—and demand more space from their parents. But they come to realize that life may not revolve around two eighth-graders after all.

The episode quotes and references Our Town, a classic stage production by Thornton Wilder that toys with the divide between the play’s fictional world and the play itself. Thus, Riley twice says the universe is nestled in the “mind of God.” And we watch our young heroes get** transferred to a classroom where they’re not the center of attention … and then grow angry when the camera won’t follow their every move. “This is not the ‘you too’ show,” a new history teacher tells them. “We were told it was,” Riley whimpers.

It’s good stuff, ultimately, since it’s all done to illustrate that even though Girl Meets World makes it seem like its protagonists are the center of the universe, they’re not. Then, during a eulogy for Mrs. Svorski, Riley compares relationships, particularly family relationships, to gravity. “No matter how far we travel, they are the ones who hold us in place,” she says.

Farkle “ogles” Riley’s and Maya’s “naked” feet. “Eyes up here, buddy,” Maya says. We hear an allusion to going to the bathroom and the story of someone losing his finger in a farming accident. We see some disrespectful behavior toward parents and authority figures.

“I want to be exactly like you,” Riley tells Maya, much to the chagrin of Cory. “I think too much, and you don’t think at all!” So when Maya boisterously boycotts homework in Cory’s class, Riley joins the rebellion—disappointing and disobeying her dad and teacher.

“Why didn’t you stop your friend?” a boy asks Riley. “You’re better than that.”

Later, Riley admits to doing Maya’s homework for her, but then learns that, in order to be a true friend, she has to protect Maya from her own worst instincts—not adopt those same bad behaviors herself. She then describes how their friendship will look for however many seasons Disney keeps this show running: “She’ll get me into trouble. I’m going to get us out of it.”

Riley and Maya try to sneak out the bedroom window to ride the subway, but they’re caught by Cory … who allows them to go anyway. There they meet a cute boy, Lucas, and Maya and the lurching subway car collude to throw Riley into his lap (twice). Simultaneously—and a little jarringly—a middle age woman calls Lucas a “hunk” and seems to admire his good looks. Classmate Farkle is openly (and goofily) infatuated with both girls. Lip gloss is used as a symbol of growing up and rebellion. Adults are sometimes treated disrespectfully. Cory jokingly calls Topanga “stupid,” but the married couple also hug affectionately.