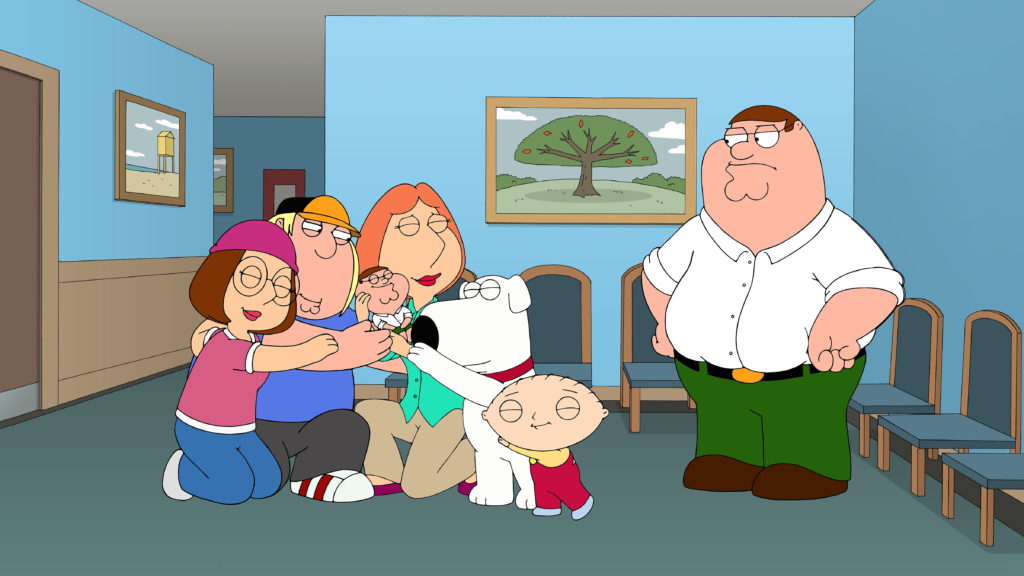 Family Guy is, season in and season out, the most obnoxious show on broadcast television.

I actually hate to say that. Not for fear of overstatement. And not for worry that I might hurt creator Seth MacFarlane’s feelings. Frankly, I’m concerned that if MacFarlane happens to stumble upon this review, he might use it as a publicity snippet, or perhaps print it out and hang it in his office as confirmation of a job well done.

Is Family Guy crass? Vulgar? Offensive? Inappropriate? Of course—and those are perhaps the only things Plugged In and MacFarlane would agree on. But MacFarlane’s not looking for my approval, or yours, or anyone else who might long for more family-friendly content on the tube. Family Guy’s not for us.

Mostly, it seems like it’s for folks who just don’t care anymore.

The show centers around the Griffin family—a dysfunctional collection of roughly animated beings who live in fictional Quahog, R.I. Peter is the clan patriarch, the titular “family guy” who makes Homer Simpson look like Ward Cleaver. His wife, Lois, and teen children Chris and Meg gamely endure his boozy, uncouth shadow—all while suffering from a variety of neuroses themselves. And then there’s Stewie, a veritable James Bond villain in diapers, who sometimes hurls homoerotic double entendres as he plots to take over the world. Brian, the Griffins’ ultra-rational, anthropomorphic dog, rounds out the family.

We’d like to tell you more about the characters but, honestly, there’s not much else to tell. The family in Family Guy is less a collection of fleshed-out characters than a mishmash of two-dimensional (literally) cutouts used as grist for the show’s one-liners. The gags drive the Griffins, not the other way ’round. Which would be OK … if the gags were actually funny.

Oh, Family Guy has its moments, but they’re pretty sparse. Some critics have called it a knockoff of The Simpsons—a show that, for all its own problems, is endowed with far more heart and wit, even now in its waning days. Instead of heart, Family Guy doles out animated nudity. Instead of wit, Family Guy gives us fart jokes. Most episodes are rife with sexually themed gags (including a recurring pedophilic character who tries to lure teen boys into his house), and many episodes dabble in racism, too. One in 2011 demeans the work of Alcoholics Anonymous and denigrates Christianity in the same breath. This series is regularly boorish, often vile and seems overeager, almost desperate, to shock: It’s a 14-year-old boy smoking in front of his parents just to see what they’ll do.

As such, Family Guy is a pretty sad show. And that sadness is only emphasized by the way in which is seems to want to embrace old-fashioned entertainment. It regularly pays homage to movies and sitcoms from 20, 30 even 40 years ago. MacFarlane shows a fondness for elaborate musical numbers, recalling MGM’s 1950s heyday. Its rhythm feels, at times, almost vaudevillian. Clearly MacFarlane has an appreciation for the entertainments our parents and even grandparents grew up with—but not enough of one to keep from dragging it down to his lewd level.

In some ways, the program’s opening song illustrates both its appreciation for old-school diversions and its unapologetic break from old-school values: Lois and Peter sing the theme—much as Archie and Edith Bunker did for All in the Family in the 1970s.

“It seems today all you see is violence in movies and sex on TV,” Lois belts out. “Where are those good old-fashioned values on which we used to rely?” Peter chimes in.

The only answer MacFarlane gives us—which we dutifully reiterate—is this: Don’t look for ’em here.

The Griffin family spoofs the Star Wars film Return of the Jedi in this hour-long season finale. Lois (as Leia) frees a mooning Peter (as Han Solo) from carbonite, allowing him to release a long-held bit of flatulence. The cast is nearly pushed into the mouth of a monster they call a “giant anus in the desert.” They escape, but not before they strangle Jabba the Hutt to death, bloodily cut henchmen to ribbons and give themselves nasty laser wounds.

On the Death Star, Stewie (as Darth Vader) tries to turn Chris (as Luke Skywalker) to the dark side. Chris ends up accidentally breaking Stewie’s neck—making Stewie angry in the Jedi afterlife.

“The Hand That Rocks the Wheelchair”

When neighbor Peggy Swanson leaves town, Meg is asked to look in on her paraplegic husband, Joe. The girl soon develops a crush on Joe, begins dressing provocatively and grows delusional. (She breastfeeds Joe’s baby and gets angry with him for not having sex with her.) She frames Peggy to get her arrested and, when Joe rebuffs Meg’s advances, throws herself in front of his moving car—hoping to become paraplegic too.

Meanwhile, Stewie builds a machine to amp up his evilness. The device instead makes an evil Stewie clone, who nearly strangles Brian before cutting off the dog’s tail and stuffing it down the “real” Stewie’s throat. (We see Stewie vomit while Brian tries to reattach his bloody tail.) The Stewie clone kills a woman by cutting her in half. He steals her car and then shatters the Kool-Aid man (lapping up the liquid with his tongue).