Few things go together like bad decisions and being 15. Not that most 15-year-olds would agree.

Take Duncan, a fellow with perpetual bedhead and a personality that makes light-speed jumps between surly and sweet. He loves his parents, but man, are they annoying, what with all their rules and guidelines and curfews. Ugh. Why can’t they give him some space? See how mature he is and let him, I dunno, stay out all night or climb a cliff or see if he can find some premarital sex somewhere? Why do Mom and Dad—especially Mom—always have to lay down the law?

“But it was something I wanted, and you said no!” Duncan says after stealing the car to go to an electronic music fest. “What was I supposed to do? Respect your boundaries?”

It’s not as if Duncan’s friends have these sorts of problems. Wolf’s parents tend to get drunk and pass out before they can do any real parenting. Bex lives with her grandma, and she’s prone to forget what decade it is. And Yangzi … well, as the clique’s resident social media influencer, rules don’t really pertain to him.

No, Duncan’s the only one stuck with parents who, y’know, care. Lame.

Still, he does care for them, too. So he does what he can to keep peace in the family and even, at times, make Mom and Dad happy. Sometimes that means forgiving 12-year-old sister Kimberly, even though she never deserves it. Sometimes it means babysitting Jing, his adopted younger sis, even if she seriously impedes his social life. (The fact that she says she’s in love with Duncan and wants to marry him once they both get older … well, that’s a separate issue.)

And maybe every once in a while, his parents have a good bit of wisdom to pass on. Perhaps, with enough of those bits bouncing around in his noggin, Duncan’s mind may catch up with his body, and he’ll become a fine, upstanding young man.

Or, at least, reach his 16th birthday.

TAKE THE NEXT EXIT

Duncanville is propelled, both artistically and audibly, by comedian Amy Poehler, best known for her roles on Saturday Night Live and in NBC’s Parks & Recreation. (Oh, and as the voice of Joy in Pixar’s Inside Out, of course.) She voices both Duncan and mom Kimberly here, and I’d like to believe that she infuses the show with a little bit of her heart, too.

Poehler is, in some ways, one of the entertainment industry’s more positive forces, at least superficially. Parks & Rec had plenty of problems, but tonally it was NBC’s sweet to The Office’s sour. Some of her other projects, like the craft-oriented reality show Making It and her child-centric animated series The Mighty B!, lean into Poehler’s sunny, relentlessly positive image.

And you can see some feints toward positivity in Duncanville. Duncan loves his family, and they love him right back—even if that love is often filled with mistakes and missteps and, well, lots of shouting. Parenting with media and sugar as your main tools isn’t recommended, but they mean well. You know that Duncan’s a work in progress, even if he himself doesn’t always admit it. His mother and father are committed to raising him the best way they know how. And the show offers plenty of commentary on what it means to grow up in today’s frazzled social media world—as well as what it’s like to be a parent today, too.

But this show’s intentions aside, Duncanville feels both willfully crass and deeply sad.

Duncan, like many a 15-year-old boy, is obsessed with sex, and he sometimes has conversations with, um, his lesser half. His already addled teen mind is further upended by its occasional run-ins with drugs and alcohol, not to mention the poor influences of his friends. These kids don’t just fall into bad decisions through good intentions: Duncan’s friends actively pursue them. And while that’s not necessarily inaccurate for some 15-year-olds, teens watching sometimes emulate what they see on screen. Language can be pretty crass, too.

But more than that, I found myself thinking about all the small tragedies lurking behind this comedy: Wolf’s uninvolved, borderline abusive parents. Bex’s little-considered grandmother. Duncan’s own father, a man desperately determined to avoid the same mistakes his dad made. I realize that laughter often springs from sadness, but the effect here detracted from what appears to want to be a simple, escapist cartoon.

I wouldn’t want to live in Duncanville. Few of us would. But frankly, even visiting the place gets me down.

Kimberly, Duncan’s little sister, is forced “against her will” to become a babysitter for the sheltered boy next door to get enough money to pay for the pop socket she absolutely must have. She gets distracted looking at therapy patient files the boy’s mother has for her clients, and Kimberly’s parents join her for a gossip session. They find a bad (but apparently rather accurate) report on Annie’s parenting in the files, and they scornfully look through the neighbors’ house in hopes of retaliation. The boy finds them destroying his house and starts blackmailing them. Kimberly takes the blame for the whole incident, and the family grows closer together through their affirmation of Annie as a mother.

Meanwhile, Duncan’s friend Yangzi is held captive by his new smartphone. His brain stops working correctly, and he has to be restrained for his own well-being. Eventually, he snaps out of it, but with some unintended consequences.

Nearly every quip, line, and scene in this episode mocks the obsession that teenagers often have with technology.

The language of this episode is worse than others. Annie breaks the fourth wall and apologizes mid bit for the number of times d–n is said. Drinking wine is casually referenced a few times. A few veiled sexual comments are crass and inappropriate.  Few people would disagree that finding an identity and purpose through social media is healthy, but the story does not seem to offer any solutions.

Duncan’s crazy Uncle Stan is up to his ill-conceived antics again. He convinces the family to fake his funeral to get out his most recent debts, and Annie, Duncan’s Mom, has a wake-up call that Stan is off the rails entirely.

Meanwhile, Duncan and his friends are utilizing a neck brace borrowed from Stan to get out of various activities. They take turns until they all need to use the brace at once, and their solution is a fight to the death—resulting in major injuries to all involved. Where are these injuries? You guessed it: their necks.

Annie’s attempts to set Stan up with a female companion consume much of the episode, leading to a lot of conversations about romance and sex. Stan is an absolute wreck for the entire episode. The humor of the show can be crass, disgusting, include foul language, and satirical of the society teens are raised in today (some of which can be both funny and insightful). Unfortunately, some of the show’s jokes sink to a level feels like it kills a few brain cells with each episode. Stealing and cheating are somehow both praised and disparaged as the various characters trick and lie to each other. Crude references to the male anatomy happen a few times. Stan’s Alcoholics Anonymous sponsor becomes part of the storyline.

Despite having had his driver’s permit for a month, Duncan shows very little interest in learning how to drive—until his crush, Mia, tells him how good he looks behind the wheel. Before long, he’s sneaking out of the house with his friends to meet Mia at an electronic music festival—with only a heavily medicated, practically comatose octogenarian in tow as a legal chaperone.

In a dream, Duncan (who rips off his shirt) flirts with Wonder Woman, who informs him that he has a sexual thought every seven seconds and offers to make him “a man.” (In a follow-up dream, Duncan finds Wonder Woman making out with Batman instead.) When he talks with his crush, Duncan’s friends mock him for obviously having an erection. We don’t see anything, but we do hear said body part apparently talk to Duncan, giving him very bad advice.

Jing, Duncan’s much-younger adopted sister, has a crush on Duncan and references it often. Bex, the only female in Duncan’s crew, reminds her friends that she’s a girl, referencing her breasts. Duncan’s mom, Kimberly, role-plays as Mia—much to Duncan’s discomfort—saying she’s too drunk to give consent and telling Duncan that her blouse buttons seem to be coming undone. One of Kimberly’s friends makes a pass at Duncan while drunk.

Mia works at a pizza joint that supports “anti-LGBTQ causes,” which motivates her to stuff her finger in every pizza she serves. The stadium where the electronic music fest is held announces, on its sign, that an “evil megachurch” will be on tap there tomorrow.

Duncan nearly wrecks the family car a couple of times, and his driving does end the life of a tree. Someone breaks bottles in her mouth, and blood dribbles from her animated lips. We hear about how someone was swallowed whole by a python. Duncan’s dad promises that Duncan’s first driving lesson won’t end like his did: “With me beating you and taking you to Wendy’s and beating you again.”

One of Duncan’s friends shares a marijuana edible with his pals—one that Duncan apparently consumes. An elderly woman expresses a desire to “hotbox” (inhaling marijuana fumes in an enclosed car). People get intoxicated drinking wine. Duncan and his friends play beer pong with “near beer.” Kimberly worries about the drug Molly and tells Duncan that she loved him so much that she stopped smoking “halfway through my pregnancy.” We hear about cycling doping scandals; someone says that “protein milk helps you poop.” Someone falls unconscious after inhaling pesticide. Duncan lies to, and yells at, his parents. We hear “a–,” “d–n,” “d–k” and “sucks,” as well as four misuses of God’s name. 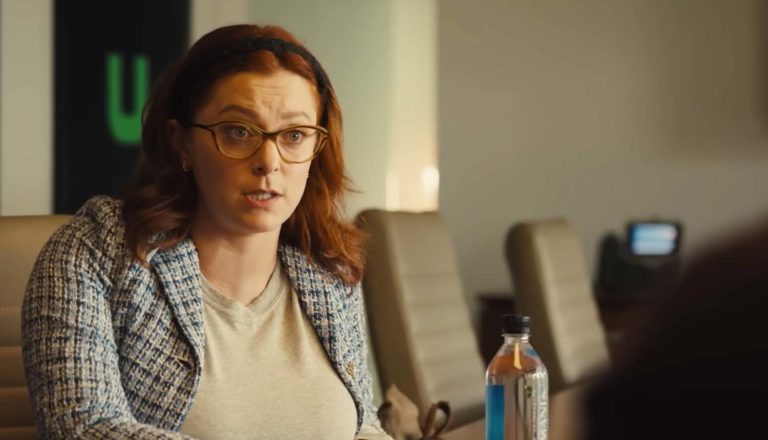