The Bureau of Magical Things 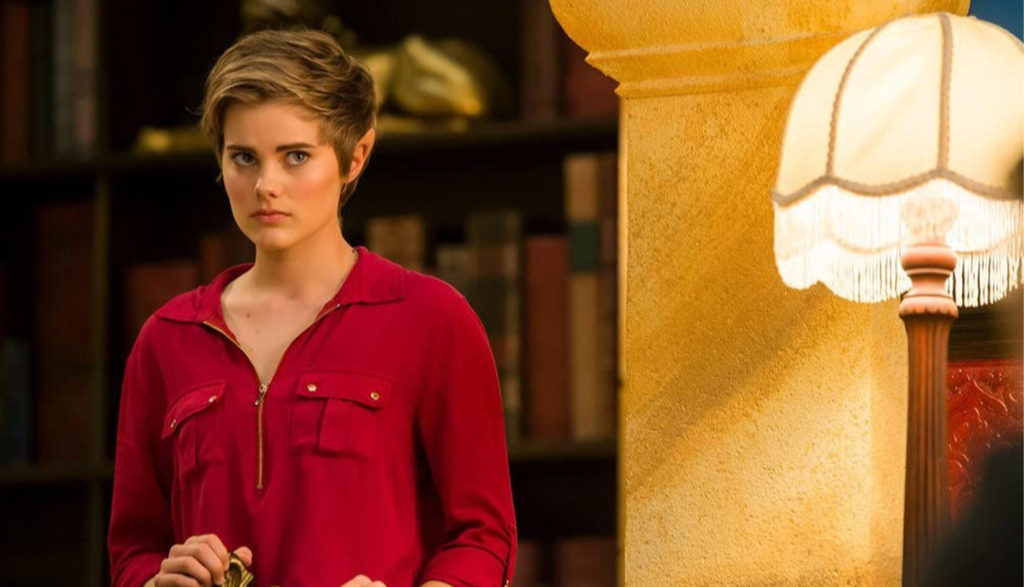 What do you get when you cross an elf, a fairy, a magical textbook, and a teenage basketball player?

You get Kyra Glen, a high school student who’s not all that comfortable with her newfound powers. If she wants any chance at defending the secret magical world that exists alongside her own, however, she’s going to have to learn to use them.

A Human Walks Into a Bureau…

The Bureau of Magical Things takes place in a world where not only magic exists, it’s been right under our noses for centuries. Humans just don’t have the ability to see it. An organization called the Department of Magical Intervention is dedicated to protecting the human world from the magical threats. Young elves and fairies are trained to join the DMI by the mysterious Professor Maxwell, who runs a small bookshop as a front for his magical school. The DMI depends on complete secrecy from the human world, a secrecy it has maintained for hundreds of years.

Imogen is an elf, Lily is a fairy—two species that don’t necessarily get along. They may both be students of Professor Maxwell, but that’s about as far as their similarities go. When Imogen steals a book from the school library, Lily chases her down, leading to a magical struggle—a struggle that human high school student Kyra wanders straight into.

After being caught in the middle of the elf/fairy clash, Kyra begins to notice some strange occurrences. Her fingers begin randomly glowing, the dogs she walks start talking to her, and she accidentally teleports herself on top of a mountain. Thankfully, Imogen and Lily are there to provide some much needed answers: they’ve accidentally given her magic powers and she’s become a tri-ling, meaning she’s now part human, part elf, part fairy. She’s got the telepathic powers of an elf and the animal communication abilities of a fairy, all in one human package.

While most kids might leap at the opportunity to go to have magical powers, Kyra isn’t as sold; all she really wants is to go to school, play basketball, hang out with her friends, and be a completely normal teenager. Things begin to change when she meets Professor Maxwell and his other students—Darra, Imogen’s brother, and Ruksy, a young but extremely talented fairy—and begins to learn the extent of the dangers facing both the magical and human worlds.

Everyone thinks that truly uniting humans, elves and fairies is impossible. But could Kyra be the key to bringing them all together?

Saved by the Spell

When it comes to content concerns with the Australian children’s series, it’s really all in the name. Magic is a key component of the world. Elves can move things with their minds, while fairies can fly, cast spells with their wands, and some can speak to animals. The intention behind the magic, however, is to secretly protect the humans they hide from. “Magic beings are all around you, keeping you safe,” Lily tells Kyra. “The human world would be in chaos without us.”

The importance of teamwork and selflessness is also emphasized; Professor Maxwell insists that his students learn how to work as a team, claiming they’ll never succeed in eliminating magical threats on their own. Turns out, this isn’t a concept that comes very naturally to them, as they’re mostly concerned with taking the glory for themselves. They quickly learn, however, that the individualistic method isn’t going to get them anywhere. It’s only when they trust each other and work together that they can effectively protect the human world.

The presence of spells and magic aside, The Bureau of Magical Things provides a clean, family friendly alternative to other less innocuous fantasy series. It’s a bit like Harry Potter, but far more Sorcerer’s Stone than Deathly Hallows. Terrifying monsters and violent spells aren’t an issue here, nor is suggestive content (minus some mild flirting and traded glances). For parents looking for a fantasy world they can show their young children without stressing about content—step through the wall in Professor Maxwell’s bookshop and into the magical world.

Imogen and Lily introduce Kyra to Professor Maxwell and his other students, Darra and Ruksy. Though Kyra is originally unwilling to develop her powers, she begins to rethink her stance after helping the class take down a mild magical threat.

Kyra and Darra, an elf in Professor Maxwell’s class who also happens to be Imogen’s brother, are clearly attracted to each other. They glance and smile at each other repeatedly, and Kyra accidentally falls into his arms at one point. Imogen mocks Darra for going on a date with a “tree nymph.”

The students’ teamwork is put to the test as a random magical event occurs: an enchanted chair appears and flies around, threatening to expose the magical world to the humans. Imogen, Lily, Darra and Kyra cast multiple spells in an attempt to contain it before Kyra is able to trap it in a teapot. Kyra disobeys Maxwell, who tells her not to go with the other students, and while he initially scolds her for it, eventually praises her initiative and bravery. He also tells Kyra she has to lie to her father about her new powers; she’s against it at first, but decides that it’s necessary to protect the magical world.

Imogen and Lily, an elf and a fairy being trained to join the Department of Magical Intervention by Professor Maxwell, get into a fight over a stolen textbook, and human teenager Kyra is caught in the middle. Kyra later discovers that the accident has given her strange powers, and that there’s a whole world of magic right under her nose.

Magic is used constantly throughout the episode, but never with violent or bloody repercussions. The most intense result of a spell is Kyra being thrown backwards after touching Imogen’s magical book. Professor Maxwell conjures a rubber duck that he makes breathe small flames. Kyra accidentally levitates her dress and knocks her paintings off her wall. Her human friend Peter also believes in the “multiverse”, a theory that states that there are infinite universes existing parallel to our own. Kyra and her friend Mathilda jokingly mock him for it.

Elves and fairies, the two prominent magical races, aren’t on the best of terms; they have various stereotypes and use them to tease each other. “Everyone knows fairies aren’t built for speed,” Imogen taunts Lily. Imogen tends to be unpleasant to most people, specifically Lily and Kyra; she enjoys teasing her fellow students and holds a grudge against Kyra simply for being a human. Lily catches her sneaking into the library in order to steal a textbook so that her classmates can’t use it to study for an upcoming test.