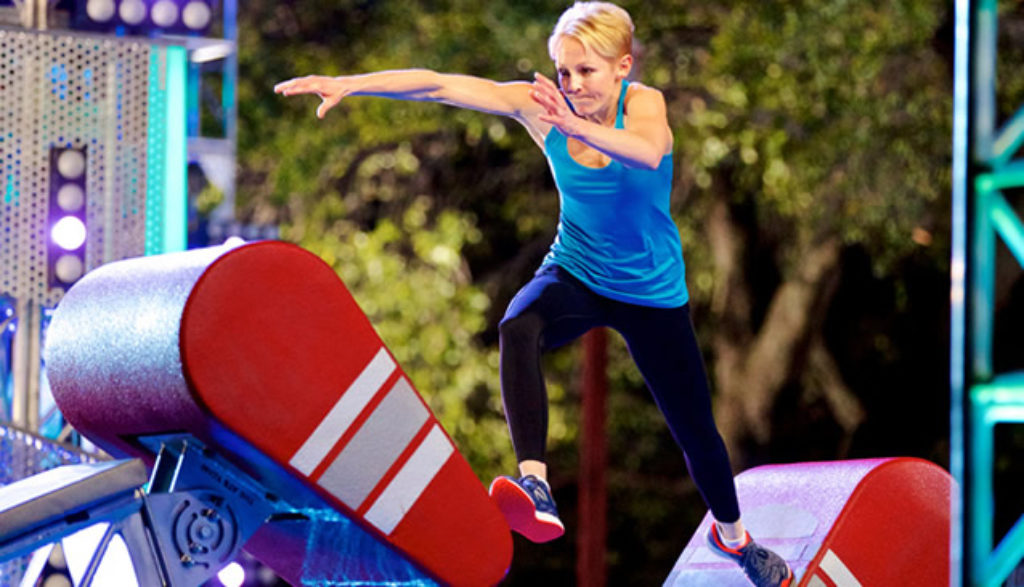 My second-grade gym teacher was an old drill sergeant. He made us run and tumble until we nearly fainted. If we were too slow, he’d pelt us with balls—the big, rubber kind that left a mark on your back. He believed that unless someone was throwing up, we weren’t working hard enough.

I suspect that when that old gym teacher allowed himself to dream—to envision new, more terrible ways to permanently scar little second-graders—he might’ve imagined crafting an obstacle course like those found in American Ninja Warrior.

A fixture on G4, the show is now a summertime experiment for NBC. It’s a strange amalgamation of sport, reality programming and the circus. It’s  American Idol without the singing,  Wipeout without the gleefully mean-spirited narration. This is American Ninja Warrior, the latest entertainment import from Japan—and it might be one of the cleaner shows on television.

During the program’s summertime run (preliminary rounds air on G4, while the high-stakes events show up on NBC), contestants will lift walls, leap chasms, swing from bars and scramble up cargo nets in ever more difficult obstacle courses—competing against the clock, the course and each other for the right to scale the man-made Mount Midoriyama, the mother of all obstacle courses. The Mount, created for the original Japanese Ninja Warrior, has succumbed to only three contestants … in 15 years.

Hosts Matt Iseman and Akbar Gbajabiamila make a big deal of the fact that no American—not NFL players, not former Olympians—has mastered that mountain. This year, they say, may be different: For the first time ever, Midoriyama’s being reconstructed on American soil, meaning the Yanks have home-course advantage. But even if they don’t punch Midoriyama’s buzzer in time, they still have a chance to win a $500,000 grand prize.

You can think of American Ninja Warrior as a cross between a real sport and ABC’s Wipeout—a reality show for guys who never really saw the point of American Idol or Dancing With the Stars. While there are a handful of laughably overmatched contestants in the qualifying rounds (whose runs at Midoriyama end with embarrassing splashdowns), it’s not long before the competitors are winnowed down to bona fide athletes.

The obstacles make it impossible for anyone to succeed based purely on size or strength or agility. While certain sorts of athletes seem primed to succeed here (parkour experts are particularly in vogue), world-class gymnasts might slip navigating the “bungee bridge” (an obstacle where contestants have to cross a watery chasm via platforms made of bungee cords), and free-running experts might falter while navigating the salmon ladder (where you hang from a parallel bar and must move the bar, and yourself, upward by way of a series of grooves). It might be a mild-mannered fisherman or golf landscaper who turns in the best time. And because of that, the show plays up the inspirational back stories of contestants—some of whom have faced real-life obstacles that make Midoriyama seem like a metallic molehill.

Are there any downsides to an upbeat sport that demands your very best effort just to give it a go? Well, the series sometimes actively encourages everyday ninja wannabes to keep up the practicing … by showing people doing some pretty dangerous stunts in public places like parks and bridges. Episodes are often rated TV-PG for a few profane outbursts. Male contestants like to strip off their shirts to show off their ripped selves when they’re victorious, and females sometimes compete in skimpy swimwear.

Contestants head to Minneapolis to compete for a spot as the next American Ninja Warrior. Men and women share personal stories of battling with cancer and other life-threatening illnesses, showing, as an announcer says, “the power of the human spirit.”

Each of the contestants show strength and resillience as they compete, while others participate in different ways, passionately supporting those they love. Some of the obstacles leave people with head wounds and scrapes (we see blood smeared on someone’s head and knee). A woman undergoes acupuncture as treatment for multiple sclerosis (needles are placed in her face and lower back).

God’s name is misused three times. A man shouts “son of a ….” without completing the phrase. Women wear short shorts and sports bras (including cheerleading outfits) and men go shirtless. A contestant shares that he works at a liquor store but doesn’t drink. A male contestant eats fried tarantulas (as do the hosts).

Thirty contestants take on a 10-obstacle course, with 15 advancing to the national finals in Las Vegas. One guy wears just a mankini and body paint, styling himself as the superhero “Captain NBC.” Another strips off his shirt.

But viewers also meet people like Michael Needham, a 5-foot-5-inch golf landscaper who dedicates his performance to his brother, a Marine serving in Afghanistan. (He’s disqualified on the first obstacle after snagging the second-best time in preliminaries). We learn a bit about Chris Wilczewski, a gym owner who says he suffered from a “major drinking issue” before competing on the show helped turn his life around. We watch as Jessie Villareal—a clam fisherman who’s never been to a gym in his life—turns in a blistering 3-minute, 32-second time on the course, becoming just the second person to actually complete the thing during the show. “I think my grandfather’s proud of me up there,” he says.

Frequently, folks fall and fail, though the only thing apparently hurt in the tumbles are egos.