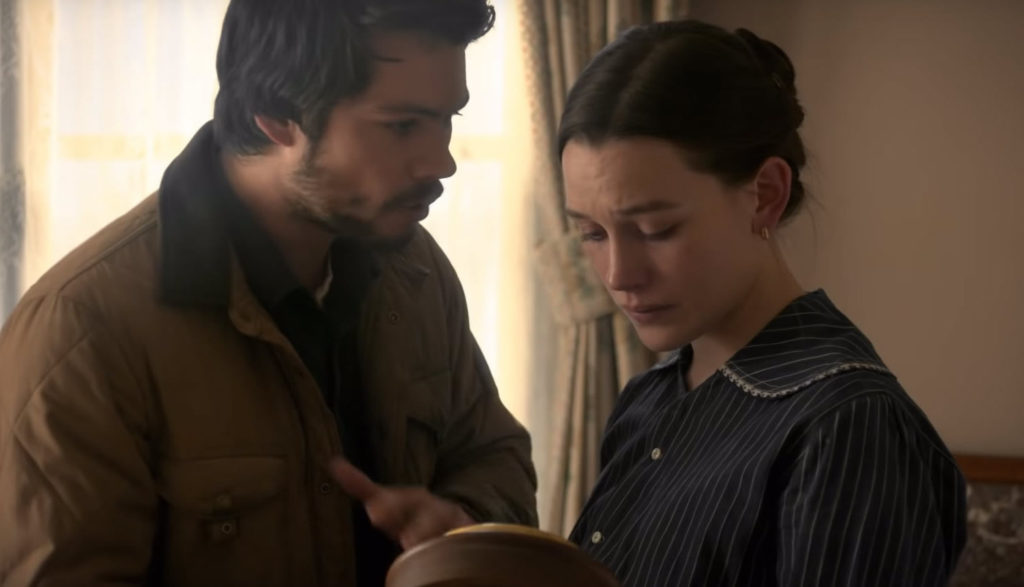 Goosebumps are best given in small doses. At least on TV.

Think The Twilight Zone. The Outer Limits. Even Alfred Hitchcock Presents. These landmark, near-ancient television programs illustrated an important truth: We can only suspend our disbelief for so long. Create a strange enough story in a weird enough world, best to make it snappy.

And even while the television landscape of the 21st century trends more to big, sprawling, multiseason epics, we still find pockets of  episodic strangeness in spots: Netflix’s Black Mirror. CBS All Access’s reboot of The Twilight Zone. And now, Apple TV+’s Amazing Stories.

It seems only fitting in a show featuring time travel that this review should travel back in time itself—back to the long-distant days of 1985 and the brainstorm of a youngish Hollywood phenom named Steven Spielberg.

Spielberg was truly Hollywood’s golden boy in the mid-1980s: Fresh off his success with E.T. the Extra-Teresstrial, Poltergeist, The Goonies and Raiders of the Lost Ark, it seemed he could do no wrong. And one can imagine when he started ruminating about crafting a television show—an anthology that would lean into some of the same chills as the old Twilight Zone series but be pretty kid-friendly all the same—you can imagine that the age’s three big networks (Fox wouldn’t even show up ’til the following year) would fight for the opportunity to air it.

The first Amazing Stories series (named after the seminal pulp science-fiction magazine) eventually landed on NBC. It turned out to be an expensive, if acclaimed, failure. Spielberg’s series won five Emmys and drew such directors as Martin Scorsese and Clint Eastwood, but lasted just two seasons.

But that was in a very different television age, when being quirky-good didn’t feed the zeitgeist like it does now. So Spielberg’s Amblin Television division thought, hey, why not give the thing another shot?

Give It the Hook?

The new series, much like the old one, still features the anthology format: Every episode features a different story populated with different characters and actors. And, again like the old series, Apple TV+’s version isn’t meant to be as creepy as The Twilight Zone or as horrific as Night Gallery. Rated TV-PG and seemingly intended for families, Amazing Stories focuses on the fantastical, not necessarily the frightening. It’s far more optimistic than the dark, disturbing insights of Black Mirror. And unlike the new Twilight Zone, it doesn’t wallow in adult themes, content or foul language.

That said, it does dabble in such content. Which means the show is hardly right for every family.

First, the quality isn’t quite what you might like it to be. The first story, at least, was less Amazing and more Meh. And while it does mind its manners more than many anthology shows, you can still count on some bad language, a bit of violence and some romance here and there—including a relationship between same-sex characters. We should also caution parents that this is an anthology show predicated on the mystical, implausable and the impossible. That setup might entail everything from by-the-books time-travel or mysterious body switches, but it could explore spiritual themes, too—from ghosts in the attic to a cursed totem someone uncovers in the back yard. You don’t know what might be on tap from episode to episode.

Sam and Jake Taylor renovate old buildings—a job that Jake seems to love, but one that Sam could take or leave. But as they refurbish an old Iowa farmhouse and a terrible storm sweeps through, Sam is transported to the same house a hundred years in the past—and falls in love with one of the residents.

Sam and the resident in question, Evelyn, kiss passionately several times, and they run off to an illegal speakeasy. (Prohibition had just gone into effect, so the two spirit off for some spirits, namely a couple of gin and tonics.) Problem: Evelyn is engaged to a man she doesn’t love (described by Evelyn’s mother as a “temperate, God-fearing man”), so their relationship is (much like the alcohol they consume) illicit.

In the present, Jake is married to another man, and the two have a daughter. (We don’t meet the hubby, we but do see a family picture of the three of them.) Also in the present, Sam aimlessly browses a dating app, sweeping left and right with alacrity until he sees someone he’d like to spend some time with. (They meet at a sports bar and drink a bit.) It’s suggested he spends the night with her: His date drives him to work the next morning, and Jake mentions that Sam’s shirt is turned inside-out. Evelyn is compared to a “whore.”

Someone threatens an interloper with a shotgun, blustering that she’ll “splatter your brains all over this wall” unless he leaves. Sam gets beaten up by a couple of other guys. Later, a bit of house falls on him, trapping him in a rapidly flooding basement. We hear characters say “d–n” three times and “h—” another four.