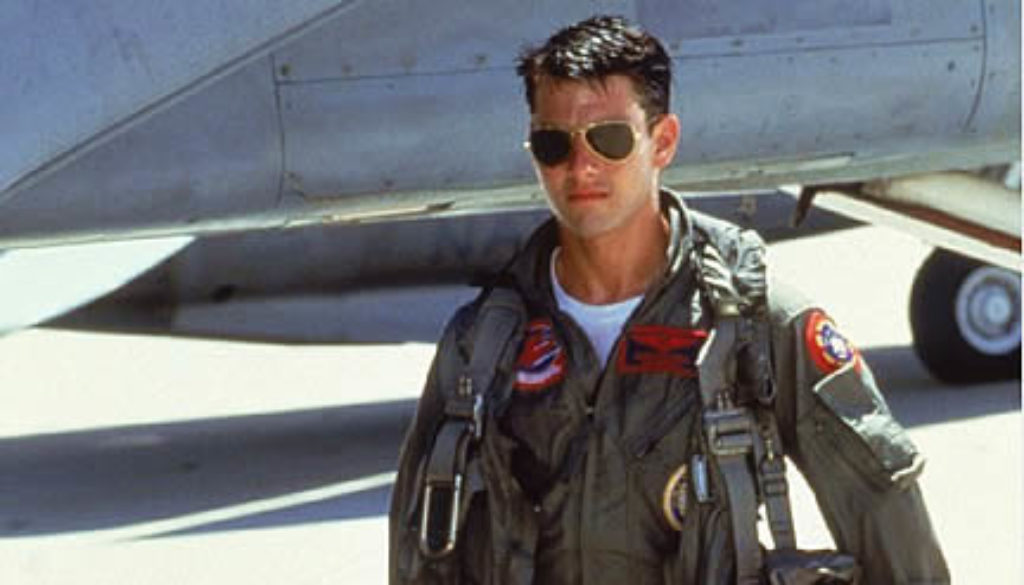 Yep. Speed is the name of the game in Top Gun, an adrenaline-fueled cinematic salute to all things fast—fast motorcycles, fast planes and fast women. In the middle of all that fastness is Lt. Pete “Maverick” Mitchell, a hotshot pilot with a renegade tendency for doing everything on his own terms and treating rules like timid suggestions.

It’s a combination that earns his commanding officers’ ire … and respect. After Maverick shows up some Russian MiG-28s over the Indian Ocean, he’s rewarded with a spot at Top Gun, the Navy’s elite school for its fighter pilots at Miramar Naval Air Station near San Diego.

Top Gun is a program designed to make the best of the best even better. Maverick arguably doesn’t need much boost in the skills department. And he knows it. But his lone-wolf attitude and refusal to submit to authority increasingly cause his peers (Lt. Tom “Iceman” Kazansky at the top of the list) and his superiors (Cmdr. Mike “Viper” Metcalf and Lt. Cmdr. Rick “Jester” Heatherly) to wonder if he’s more of a liability than an ace asset.

Meanwhile, civilian aeronautics expert and Top Gun trainer Charlotte Blackwood, who goes by Charlie, seems immune to Maverick’s bad boy charm … until she learns that he’s the one who managed to snap a picture of himself flying another kind of bird in close, inverted proximity to a rare Russian MiG.

As their romance heats up, so does Maverick’s insistence on doing things his way. Then a training accident sends his F-14 through the jet wash of his wingman, and not even Maverick’s vaunted skills can save the plane, which hurtles out to sea in a dreaded flat spin. He ejects safely, but his radar intercept officer and best friend Lt. j.g. Nick “Goose” Bradshaw is killed.

Rattled to the core, Maverick finds himself facing a crisis of confidence about his calling as a fighter pilot. And when the pesky Russians come calling again, he’s forced to face his inner demons once and for all in a high-stakes, high-speed aerial showdown.

The core moral lesson Maverick is forced to learn after Goose’s death is that he does not, in fact, get to play by a completely different set of rules than everyone else, no matter how naturally talented he may be. It’s a hard pill for Mav to swallow, but he is ultimately able to do so. That lesson might best be summed up in the phrase, “Never, ever leave your wingman.” Maverick has a tendency to do exactly that through much of the film. But in the end, when it counts most, he sticks with his wingman (his rival, Iceman) at great risk to himself in combat.

Indeed, we see that the contentious pilots have learned how to depend on each other in battle, overcoming their animosity. “You!” Iceman shouts at him afterwards. “You are still dangerous. You can be my wingman anytime.”

Goose is tolerant of Maverick’s rebellious streak almost to a fault. But in a serious moment after the duo is disciplined for one of Mav’s reckless decisions, Goose tries to help his friend see how much is at stake for him, namely providing for his young family (a responsibility Maverick doesn’t have). Maverick responds by telling his friend he won’t let him down, because “you’re the only family I’ve got.”

The script hints at why Maverick acts like such a renegade, but his backstory (involving his father dying in combat over Vietnam) is never deemed an excuse. Viper and Jester are both hard on Mav at times, but both root for him to overcome his weaknesses, as do moviegoers. Several key characters encourage him to persevere after Goose’s death. Charlie, for one, tells him, “To be the best of the best means you make mistakes, and then you go on.”

Goose wears a cross. And his wife jokes that while Maverick is off chasing women on the weekends, Goose comes home early to be able to make it to church on Sundays.

Goose’s frequent comments imply that Maverick is a ladies’ man who’s used to having casual sex with his easily awed conquests. When Mav spies Charlie in a bar, Goose dares his dashing bud to secure “carnal knowledge” of her on the premises. Initially, Maverick gets shot down. He then follows her into the restroom, where she jokingly asks if he expects to have sex with her on the floor.

Her resistance doesn’t last more than a few days, and the two soon consummate their relationship in a scene that includes intimate close-ups of their mouths and tongues groping and touching as they have sex. Maverick is shown beginning to remove Charlie’s shirt in that scene before the camera mostly zooms in on their faces. We also see bare backs and subtle sexual motions. Charlie is shown with a sheet covering her chest the next morning. One of her shirts makes it clear she’s not wearing a bra.

Goose’s wife tells him at a bar, “Hey, Goose, ya’ big stud, take me to bed or lose me forever.” Charlie repeats that line with Maverick’s name inserted a bit later.

Scenes in locker rooms show pilots in towels after showering. We see Mav wearing just his underwear (from the back). The camera goes to great lengths to ogle guys’ bare chests during a beach volleyball game. It pans across women at an officer’s club wearing outfits that reveal cleavage and leg. It’s a place Maverick and Goose dub “a target-rich environment.” The thrill of combat is said to give a pilot a “hard-on.” And there’s a bit more talk about the male anatomy in other contexts. We hear a couple of lines that snicker at gay attraction.

We see Goose forcibly eject (in slo-mo) into the canopy of his crippled F-14. After he and Maverick parachute into the ocean, Mav holds Goose’s battered and lifeless body.

An intense dogfight features the explosive destruction of one American F-14 (whose two pilots apparently parachute to safety) and four MiG-28s (whose pilots are apparently killed).

After an argument, both Mav (on his motorcycle) and Charlie (in her car) drive recklessly through traffic, with Charlie nearly causing an accident. Maverick angrily grabs the front of another pilot’s flight suit.

Between 30 and 35 s-words. Close to two dozen misuses of God’s name; more than half the time it’s paired with “d‑‑n.” Jesus’ name is abused 10 or so times. We hear a handful of crude references to the male anatomy (“d‑‑k,” “d‑‑khead”); somebody’s called a “p‑‑‑y.” “H‑‑-” pops up a dozen or more times. Other profanities include “p‑‑‑,” “b‑‑ch,” “a‑‑” and “a‑‑hole.” Maverick flashes an obscene finger gesture at a Russian pilot; it’s a story that gets (visually) retold a couple of times and becomes something of a legend as the film proceeds. Iceman flips the bird while in a Top Gun class.

One example of the way Maverick repeatedly refuses to play by the Navy’s rules: He “buzzes the tower” twice, flying fast past air traffic control rooms just to create a ruckus. Viper flaunts military security clearance strictures by telling Maverick what actually happened with his dad.

Top Gun is an adrenaline-pumping ode to outsized masculinity that’s (mostly) channeled into the heroic confines of an F-14 cockpit. It’s assertively pro-America. It’s defiantly pro-military, robustly pro-friendship and diligently pro-teamwork. Maverick learns his big lesson in the end, deciding to play nicer with others and watch their backs when the aerial chips are down. Given the choice between hero and helper, he finally sees the wisdom in choosing helper … and becomes the hero for following through on it.

But as the film delivers its amped up (music video-feeling) and emotion-driven rallying cry, it refuses to question … much of anything. If drinking and carousing and cursing help fighter jocks get the job done, then so be it, it says. If the jets are in the sky, then just shoot ’em down, it says. If a guy needs classified top secret information about his downed dad in order for him to screw his head on straight, then by all means tell him everything.

Those aren’t four-G inverted content nose dives, but they do make for a rough flight.

A 3-D UPDATE: I vividly recall exactly what I did shortly after I saw Top Gun for the first time back in 1986. I was 16, and I’d just gotten my driver’s license. I walked out of the movie and proceeded to rocket down the double-nickel freeway at about 85 mph. The way I figured it, my dad’s brand-new ’86 Ford Thunderbird—complete with digital dashboard—was as close as I was ever going to get to an F-14.

Twenty-seven years later, I can still appreciate the visceral thrill that the now deceased director Tony Scott’s big-screen love letter to fighter pilots elicits in me. Tom Cruise suddenly seems awfully young here—practically Justin Bieber-esque—but his Maverick is still larger than life, and especially so on 3-D IMAX screens that absolutely dwarf the one I originally saw this movie on. That 21st-century (Feb. 2013) techno-touch ramps up Top Gun’s cool-factor testosterone levels even higher than they were back then, if that’s possible. And better yet, seeing it with more mature eyes I can now appreciate some of the things that extend past the hype. The good lessons my pilot hero learns about teamwork and perseverance in the face of adversity, for example.

The digitally doctored print—blown up and pulled at and inflated with added dimension—does feel a tad grainy, though. And that almost serves as a metaphor for how I also saw with clearer, more discerning eyes the racy sex scene between Maverick and Charlie, and heard with keener ears the film’s nearly 100 profanities.