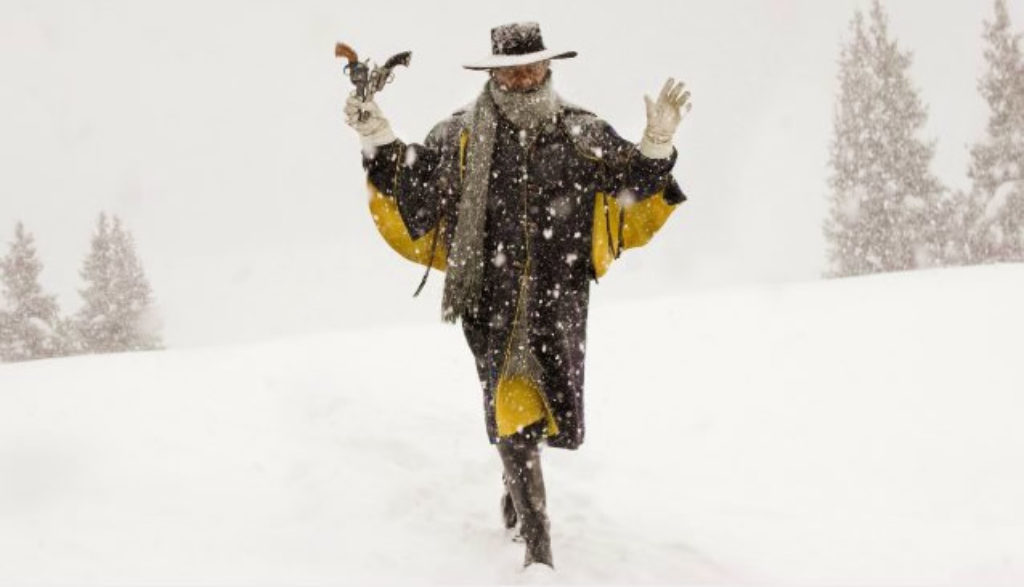 O.B. sees the man standing in the middle of the road, bodies stacked like cordwood next to him.

Corpses aren’t unusual in this time, this place. Back east, it’s possible Civil War soldiers are still being found and buried. And here, in the wilds of Wyoming, civilization is still a long way off. Death is as common as kindling, and O.B.’s surely seen his share of it. To find three dead bodies piled up by a bounty hunter—which Major Marquis Warren, the man in the road, most assuredly is—is hardly unusual. When the poster says “DEAD OR ALIVE,” most bounty hunters prefer ’em dead. Easier to transport that way.

Now there’s a bounty hunter in front of O.B. and a bounty hunter behind him. For he’s in the process of driving John “The Hangman” Ruth, along with the man’s still-living bounty of the week, Daisy Domergue, to Red Rock. There The Hangman’s determined to put her head in a noose in exchange for the $10,000 she’s worth.

That’s why even when the major begs for a ride in his stagecoach, O.B.’s on the verge of turning him down—never mind there’s a blizzard on the way. The Hangman, after all, paid a pretty penny for his privacy. But John knows Marquis, too, and he waves him inside. The corpses go on the roof with the rest of the luggage.

O.B. settles in his seat again, breath steaming like a train engine. Red Rock is a long way down the road, and the blizzard’s coming in with a fury. Looks like they might need to stop a spell at Minnie’s Haberdashery. Only a speck on the map, true, but a warm, walled speck, offering food and shelter and maybe a fresh pot of coffee.

And then O.B. spots another guy running from the storm—just a black spot on a stark white canvas. He’ll probably want a ride, too, O.B. guesses. Who wouldn’t on a day like this. But the stage is getting pretty crowded now, and tensions are already rising.

Heroes are in scarce supply in this Quentin Tarantino film. O.B. might be as close as we get to a rooting interest. Not that we know much about him, but the stage driver seems to do his job well, and he’s willing to do the hard work asked of him.

Maybe we can also give The Hangman props for taking his bounties in for proper justice—rather than taking the easy way out and engaging in some frontier justice of his own. And, finally, we should mention that Daisy has, shall we say, someone who loves her. And that love is so strong it’ll prompt the man who possesses it to do anything to keep her neck from getting stretched.

(It’s the anything part that proves to be the problem.)

The movie opens with a lingering, multi-minute shot of a stone, snow-covered crucifix standing near the road.

Given the dearth of spiritual content in the rest of the feature, this initial shot is interesting. It may suggest that Jesus—and the grace and mercy and redemption He represents—has no place in this story. He is left out in the cold. What little spiritual content does follow evokes hell, not heaven. The place is referenced a time or two, and one person tells another that they’ll likely see each other there before long. Someone does play “Silent Night” on the piano.

We see a man stagger buck naked in the snow, exposing moviegoers to full-frontal nudity. The man’s assailant and captor crudely and graphically describes how he forced the naked man to perform oral sex on him before killing him.

Let’s ease into this section with a look at Daisy’s face. When we first meet her, she already sports a sizable shiner. By the time she gets to Minnie’s she looks quite a bit worse. When she says something inappropriate, John hits her, causing a trail of blood to trickle down the side of her head. And when she spits on a letter carried by Major Marquis (written, we’re told, by Abraham Lincoln), John smashes her face with his elbow, breaking her nose and causing the blood to run in rivulets down her face—blood that Daisy defiantly licks off her lips, as if in anticipation for later revenge.

And that abuse barely hints at the festival of horrors that follows.

Minnie’s Haberdashery is the site of repeated, grotesque, almost indescribable butchery. Several people die from gunshot wounds. One man is shot twice in the chest before having his head blown—literally—off. Another has the top of his head shot off, spraying more blood and gore. A man has his privates blown away, with, again, bloody results. People are shot in the legs and feet and guts, sometimes groveling or crawling or crying on the floor before they’re finished off.

Folks die in other ways, too. One man is stabbed repeatedly. Two die while vomiting up copious amounts of blood. Someone, already dead, has his arm hacked off, to be dragged through much of the movie’s finale. Someone is hanged. People leave trails of bright red blood in the snow. Hands, staunching terrible wounds, run slick with crimson. Floors and bed sheets and chairs are stained. We’re also told of other horrible atrocities committed by many of the folks in the haberdashery.

About 25 f-words, 15 or more s-words and nearly 70 uses of the n-word. “Cracker” is also used dozens of times as a racial epithet. Nearly as many profanities fall from the mouths of characters as drops of blood, as moviegoers stumble into an unrelenting hail of words such as “a–,” “b–tard,” “b–ch” and “h—.” God’s name is misused at least 35 times—almost all of which come in conjunction with “d–n.” Jesus’ name is abused five or six times.

Several characters smoke pipes or roll and smoke their own cigarettes (discussing types of tobacco as they do). Drinks are downed at Millie’s. Major Marquis sips brandy.

This movie is filled with lying liars who lie. That’s part of the point: We’re not really supposed to trust anyone. People spit. They vomit. And even beyond the racist labels thrown so casually around, it’s worth saying it right out: These souls are consumed by some pretty extreme racism.

That’s not a slam so much as a lament. The thing about Tarantino is that he clearly knows his craft. His feel for dialogue is a thing of beauty. His sense of scope is impressive. The Hateful Eight has some very likable moments as it somehow combines a sweeping, epic Western with an intimate stage play. And as much as this pic pays homage to the sprawling Westerns from the 1960s and ’70s, it seems just as predicated on the old-fashioned, drawing-room mysteries of Agatha Christie. A cast of duplicitous characters trapped in an exotic locale? Check. A mysterious case of poisoning? Check. A dogged inquisition of the suspects? Check. “Murder at Minnie’s Haberdashery” even has a certain Christie-like ring to it.

But for all its obvious craftsmanship, The Hateful Eight is ruined by its unremitting incivility.

If Tarantino was a chef, his would be a complicated, painstakingly prepared lobster dish. Once fully set to serve, he would look at the platter and say, “You know what this needs? Horseradish.” So he slathers several jars of the pungent stuff over his delicate dish as if it were icing. As if he wanted to obscure any sign of his original cooking skill.

And it’s not just the lobster Tarantino treats in such a way. The salad? Needs horseradish. The broccoli? Horseradish. The chocolate brownie? More horseradish. He’s even spiked the wine with a pound or two of it. At one point in The Hateful Eight, Major Marquis says that when Minnie makes a stew—no matter the meat—it always tastes like Minnie’s stew. When Tarantino makes a movie—no matter the genre—it always tastes like gore.

I’ve heard many theories as to why Quentin seems unwilling or unable to allow anyone to see his technique through anything but a messy sheen of red. But I wonder if part of it may be fear. It can be frightening to step away from your familiar bag of tricks. It can be worrisome to contemplate disappointing an audience that has come to expect ever bloodier bloodbaths. Because when you slather everything in horseradish, you know at least that people who love horseradish will eat your food. Even if they can’t taste or appreciate anything else.