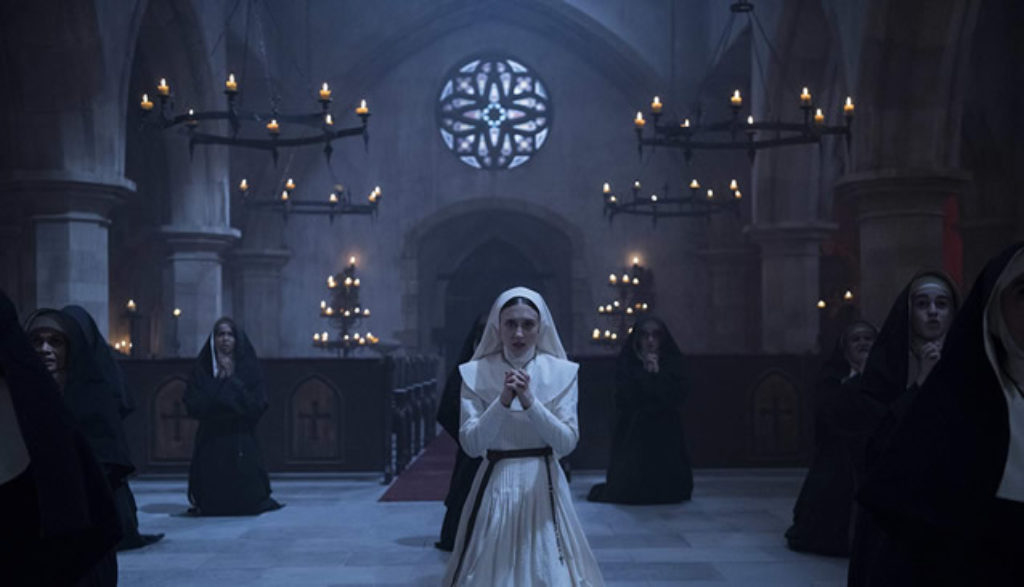 Let’s face it: Unfinished basements are always a little creepy. But the one in Romania’s Cârța Abbey, circa 1952, goes well beyond the occasional damp corner or cobweb.

Take, for instance, the ill-lit hallway full of dangling crosses—not the sort of decorative touch you’d see on your typical HGTV show. Or the fact that the hallway leads to a door stamped in three Latin words: Finit hic Deo.

Clearly, the basement could use a little remodeling, and perhaps the nuns who live in the abbey would like to do exactly that. But they’re a reclusive bunch, not inclined to welcome just any ol’ contractor into their sacred (?) confines. They’ve been shuttered away from the outside world for generations now. And they’re rarely, if ever, seen.

Why, the nuns’ own delivery man has been carting up the abbey’s goods for several years now, and he’s only seen a nun once in all that time. That was quite recently, though: a dead one, dangling from a rope. Even weeks later, the blood found below her hanging corpse is still fresh. Sticky.

Word of the suicide reaches the Vatican, and soon the Holy See contacts Father Anthony Burke, once one of the Catholic Church’s most esteemed investigators, and asks him to check out the abbey. They send along Sister Irene, too—a young novitiate who, as a child, experienced a series of mysterious, perhaps divine visions.

Why send an investigator like Burke? Or a supernaturally attuned nun? Surely the Vatican suspects (as I’m sure you do, too), that the suicide is more than just a tragic happening. There’s something extra-dark at work in the abbey—an evil that just might be leeching out.

Whatever’s scurrying around in that basement will need more than just your run-of-the-mill exterminator. It’ll need an exorcist.

Clearly, the abbey is dealing with a pretty awful, very evil supernatural infestation. And almost every living person we see or hear about will risk his or her life to fight that presence.

Sister Irene is the movie’s pure-of-heart protagonist for most of the movie—a paladin fighting the evil with both faith and courage. She rescues Father Burke from certain death and risks not just her own life, but her very soul, to do so.

Father Burke is a more morally compromised figure in some ways. But he, too, puts his life on the line to chase away both the abbey’s demons. (And perhaps his own, too.)

Oh, and that delivery guy we mentioned in the introduction? He comes back for more, saving lives for the greater good.

As for the nuns … well, their presence here is a bit more complex. But we learn that for centuries, they’ve made some incredible sacrifices themselves—doing everything in their power to keep the evil locked in the abbey. They were successful for a good long while, too.

The Nun is the most spiritually soused movie I’ve seen this year, and that’s by design. “Thematically, when I think about these movies, it really comes down to belief,” says screenwriter Gary Dauberman in a faith-centric featurette released in conjunction with The Nun. But to get into the movie’s spiritual underpinnings, we will have to spoil a bit of the movie itself.

The titular centerpiece of The Nun is actually a demon named Valak, identified in the movie as “The Defiler.” It was called forth by the abbey’s previous owner, a devil worshipper of some renown who essentially tried to open a gate between our world and hell. (We see some infernal, illustrated spellbooks he apparently wrote.)

The Catholic Church caught wind of that scheme and put the kibosh on it before it could be fully realized. The Church then took over the castle, turned it into an abbey and sealed the doorway shut with the help of a super-holy relic. The nuns were tasked with praying in the complex night and day to keep that diabolical portal sealed.

Those constant prayers illustrate the power of prayer, though most appear to be centered on Mary. We see several statues of the Virgin holding the baby Jesus, and Sister Irene’s childhood visions always ended with a reference to her: “Mary points the way.”

Physical constructs of the faith—crosses, holy water and especially a super-holy relic—are shown as having literal, supernatural power to ward off or destroy evil.

We see statues of Christ on the cross, some of which have been defiled. (Jesus’ head has been removed from one of them.) Crosses are everywhere—hanging in hallways and on walls and filling fields. At least some of those outside crosses are gravestones, of course, but others are perhaps wards: We’re told that they may have been placed to keep some sort of evil in the abbey, not keep evil out.

At least one cross turns upside down of its own volition. Lots of beings walk around in nun habits, of course—though many corrupt the holy garment with unholy purpose. Indeed, the demon’s role of “defiler” is critical to the film’s spiritual tension, given that it has definitely defiled the holy abbey and perhaps corrupted at least some of the nuns inside. In one scene, the evil entity carves an upside-down pentagram on someone’s back. (Another pentagram, created to serve a role in obviously unholy rites, is also seen.)

We see an exorcism. Other people are possessed by unholy beings: Sometimes crosses appear beneath the skin of these folks. Corpses get reanimated. Old books contain pictures of demons and arcane symbols. The corpse of a nun, clutching a cross, sports what appear to be nail holes in her hands, marks suggesting stigmata. Burke suggests that the Holy See keeps and holds a great many secrets. People spit to ward off evil. We see a novitiate undergo rites to become a full-fledged nun.

Before she heads to the abbey, Irene (who’s apparently a teacher at a Catholic school) tells a story about dinosaurs with the aid of some plastic toys. One of the girls tells Irene that the school’s Mother Superior doesn’t believe in dinosaurs because they’re not mentioned in the Bible. Irene suggests that it’d be a mean trick for God to stick all those dinosaur bones in the ground if they didn’t exist and points to penguins as proof that not every animal needs to be mentioned in the Good Book: “The Bible is God’s love letter to us,” she tells them, “but that doesn’t mean He doesn’t want us to ask questions.”

When Father Burke first knocks on the delivery man’s door, “Frenchie” (the delivery man) asks Burke if he’s an “angry father or jealous husband,” because that’s usually who comes to visit him. Frenchie flirts with Irene before he’s told she’s a novitiate. Later, he performs CPR on her, apologizing for giving her the “kiss of life.”

A demonic entity rips part of Irene’s habit, revealing some of the woman’s bare back.

As mentioned, a nun hangs herself. We see her throw herself from the window; we later get an extended view of her corpse—hanging from the rope as crows gorily eat away her face. Blood drips below her, and we see that same pool of blood frequently. (Blood that sometimes pours, sometimes floods down the abbey steps becomes a frequent visual motif in dreams and visions, too.)

The corpse of that disfigured nun returns to life at several junctures, sporting her gruesome face in all its ravenous horror. Another dead body springs to “life” again as well, stabbing someone in the leg with the end of a pointy cross. That living corpse is later set on fire by a priest’s prayer and cross (placed on its forehead), and its head gets blown off by a shotgun blast.

Heads roll elsewhere, too. Someone is buried alive. Hands burst through wood and stone, grabbing and clawing at intended victims. Mysterious figures stand, their heads covered with bloody bags. Apparitions and/or corpses crack, as if made completely of dried, desiccated bones. (Sometimes body parts fall and roll dustily on the floor.) Snakes slither out of the mouths of ghouls, and one bites into someone’s eye. A bloodied, obviously doomed nun is yanked into the dark by an unseen entity. We hear about the suicide of a young village girl. People get thrown into walls and bits of furniture—sometimes accompanied by sickening cracks and apparent death. Someone nearly drowns.

We learn that Father Burke performed an exorcism on a 10-year-old boy sometime before he visited the abbey. In flashback, we see the boy strung up in a barn, with Burke beginning the exorcism rites. He admits to Irene that he may have been too “overzealous” in that particular rite, though: Again in flashback, see him cradling bloodied, near-lifeless boy in his arms, and we learn that the child died a few days later.

When Father Burke plucks an extraordinarily sacred relic—a container filled with Jesus’ blood—from its hiding place, Frenchie blurts out, “Holy s—,” “The holiest,” Burke tells him. We also hear three possible misuses of God’s name, though given that they’re often uttered when faithful characters face supernatural danger, they could be heard as sincere petitions to the Almighty.

Back in 2013, Warner Bros. released The Conjuring—a wildly successful horror flick that, for all its scares, treated matters of faith with respect and even a kind of reverence. It was rated R, but that rating was solely based on how flat-out scary it was: no sex. Not much language. Surprisingly little blood, given the rating and subject. Oh, and supposedly it was based on a true story.

My, how things have changed.

That movie spawned the Conjuring universe, a franchise full of gothic horror yarns long on atmosphere if a bit short on logic. Any “true story” thread buried in there was lost long, long ago.

But the spirituality is still here, and the franchise’s fifth installment is perhaps the most explicitly spiritual yet. Evil is real, the movie tells us, but so is God. Spiritual trappings are everywhere. And when in doubt or danger, you can’t go wrong with a little prayer.

But along with its spirituality, The Nun invites a whole host of supernatural grotesquerie to the party. While the original Conjuring relied almost solely on its incredibly dark, foreboding atmosphere to scare up its scares, this chapter slathers the screen in blood, earning its R rating and then some. And while this film’s inherent spirituality is ultimately redemptive, it’s also extraordinarily twisted at times. The demon here is indeed a defiler—one who glories in twisting all that is holy into something horrifically profane—and that’s not easy, or advisable, to watch.

The Nun’s still plenty atmospheric, sure. But for those who like a little terror without the visual trauma, this movie is not for you. 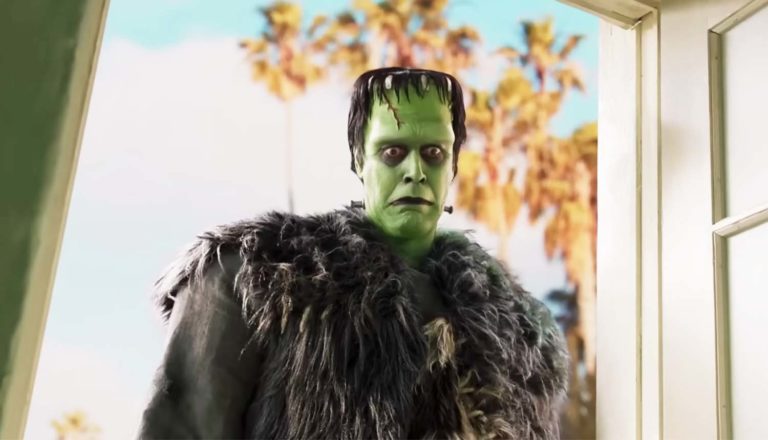