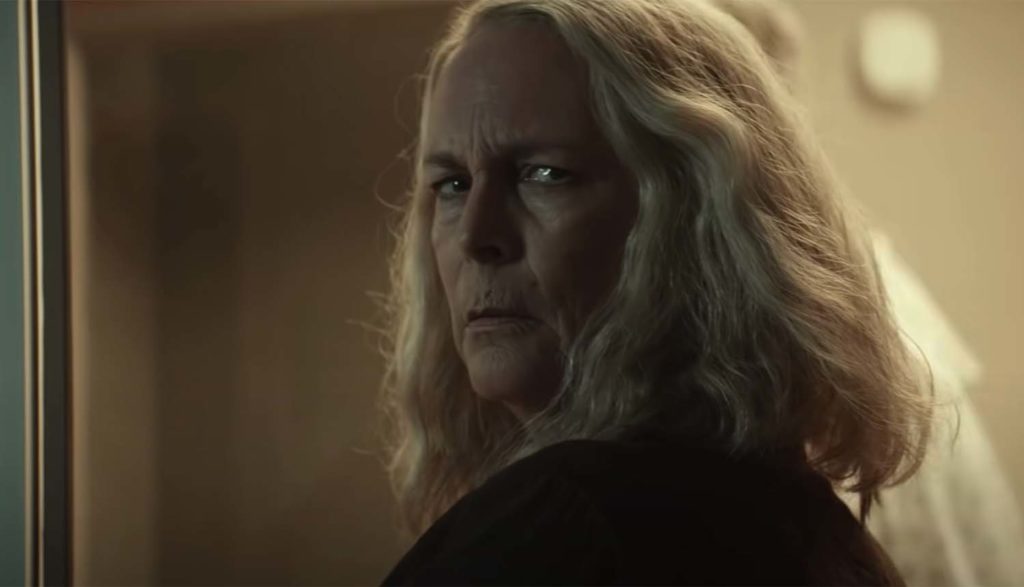 If you saw the last Halloween,film you know that the villainous Michael Myers finally met his end: shot in his creepy mask-clad face and left trapped in the basement of a burning house.

After some 40 years of nightmares and terror, the slashed and bleeding—but gratefully still-breathing—Laurie Strode sighs with relief. And she can’t help but grin just a little as she girds her leaking abdomen and heads off to the hospital for a little stitching and care.

But wouldn’t you know it, the fire department is still working in the town of Haddonfield. Even on Halloween night. You might think they’d be too busy saving people who had been attacked by a rampaging madman. But nope, those red-protective-gear-wearing good guys quickly arrive to do their duty. They bravely run in to stop the raging blaze and save any survivors.

They run in. And a brutal, unstoppable killer steps out.

Let the Halloween bloodbath resume. Don’t you just hate it when people do good things?

A number of people in this tale do indeed do good things—from protecting others, to putting themselves in harm’s way to stop a killer. One man for instance, stands strong and cries out, “We will never succumb to fear.” (Unfortunately, foolish choices tend to be part of their actions far more often than wise ones. And fear abounds.)

There’s nothing religious or faith-focused in the tale, but one guy talks about the killer Michael Myers and says that he “had a power beyond any mortal man.”

Later in the film, the hospitalized Laurie Strode says: “The more he kills, the more he transforms into something else, something impossible to defeat.” And we see that reality played out as the killer endures bullet wounds, as well as being beaten and stabbed by knives, bats, crow bars and a pitchfork, only to rise and brutally kill his attackers.

Someone mentions taking drugs with a shaman. Some kid exclaims, “Satan, not today!”

Three young women sing and are dressed as mermaids in close-fitting, low-cut outfits.

Bodies of the dead are, oddly, kept in a room with a window to the hallway. One of them is a man who is completely unclothed and fully exposed. The camera catches sight of him twice.

A gay couple now lives in Michael Myers former home. And the two of them decide to hunt the killer down after he breaks into the house. (One of the men is dressed in boxers and a T-shirt.) After Myers kills them both, he arranges their corpses in an intimate but very bloody pose, reflecting a photo they have on their dresser.

This pic pulls out the stops in an effort to stage realistic and very gory kill scenes. People are shot or stabbed in the neck with blades and broken glass. And the camera lingers to watch blood bubble out through the wounds. Michael Myers jams blades into eyes; through throats, chests and abdomens; and up through jaws. He smashed faces with an axe and cuts someone open with a buzz saw.

The killer impales a young guy’s head on a fence post and savagely lacerates both men and women with anything sharp at hand. And he cruelly strangles people, bashes heads into walls and through broken windows. He crushes a victim’s eyes with his thumbs; sends people tumbling down a flight of stairs, their limbs snapping like kindling wood; and twists a teen’s neck around backward after brutally bashing his head and throat through a broken railing.

There doesn’t seem to be any reason or logic to Myers’ many kills or the tableaus of dead bodies that he sometimes takes the time to stage.

People do land attacks on the killer, too. He’s beaten, shot, burned and stabbed. But the normally deadly blows don’t seem to have much effect on him.

Large groups of people gather together to defend the innocent with the rallying call, “Evil dies tonight!” But they become a mob that hunts an innocent mental patient. The mentally ill man ultimately commits suicide while running from his pursuers by jumping out from a 10-story window. His body hits the pavement below, and the camera looks closely at his snapped and twisted limbs, as well as his gruesomely smashed open head and upper body.

This mob also corners another individual. They batter and stab him repeatedly with all manner of bladed and bludgeon-like weapons. And in the course of their mindless stampede, innocent people tend to be pushed over and fall down stairways and the like.

There are also scenes of Laurie being operated upon. The camera watches closely as doctors work on her slashed-open, bloody abdomen and then staple the wound closed.

More than 20 f-words and a dozen or so s-words are joined by multiple uses each of “d–n.” “b–ch,” “h—” and “a–.” There’s a crude reference to a teen girl’s breasts. God’s and Jesus’ names are misused repeatedly (with the former being combined with “d–n” four times).

A large group of people drink heavily (beer, champagne and hard alcohol) in a packed bar. Some are inebriated. Later on, several other characters drink wine and booze in a couple different scenes.

A pair of guys share a joint. Another man speaks of smoking peyote with a friend.

While in the hospital, several people are hooked up to an IV. A wounded police officer is given a needle full of some form of pain killer. Laurie tells the nurse, “Help out my friend here. Make it a double.” Then, later, Laurie pulls herself out of bed and injects herself with the same drug.

We see two different groups of young bullies pranking and tormenting people. During a flashback, we see two policemen cover up an accidental murder.

The beleaguered town of Haddonfield, Illinois, has a peaceful Halloween night. Its townspeople all smile, joke, and walk the friendly trick-or-treat routes without care. And the once nightmare-inducing Michael Myers takes off his mask, grabs a deep breath of fresh air—that doesn’t smell like a combination of ancient rubber, halitosis and sweat—and heads off to get the psychiatric help he so desperately needs.

Now, that would be a Halloween script filled with surprises. Halloween Kills, however, avoids surprises as thoroughly as a vampire shuns crosses.

This pic’s screeching, impaling and exuberant hemorrhaging is exactly what you’d expect it to be. The cast runs around with totally predictable hyperventilating horror expressions airbrushed across each of their faces. And the rest of the movie is a disgusting plate full of carnage, guts, gaping wounds and squished eyeballs.

You could go in with the thought that Michael Myers will finally receive—as the movie’s trailer promises—his long-sought-after comeuppance for his evil deeds. But if you believe that, I’ve got a very nice bridge to sell you. Hey, I’ll even throw in an extra serving of carnage, guts, gaping wounds and squished eyeballs. (No extra charge.)