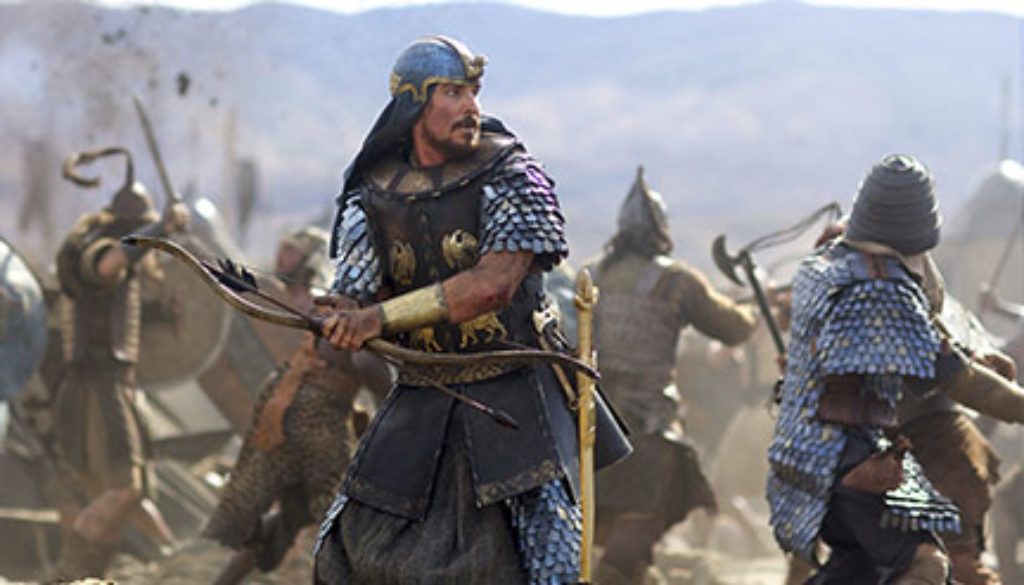 The gods? Pish. Moses can do without ’em.

In the ancient Egypt reconstructed here by famed film director Ridley Scott—where rivers, rocks and rising suns all have their own personal deities, where the pharaoh Seti scrutinizes animal organs for omens—Moses puts his faith in himself and his own strong right arm. As one of Seti’s most trusted generals, he knows full well the challenges facing this riverfront empire: Neither Amun nor Osiris nor any other deity is going to save the Egyptian people from the Hittites. Moses and his princely stepbrother, Ramses, at the front of the Egyptian army, stand a better chance of protecting the kingdom than a handful of goose guts.

So when a priestess uncovers an omen in some entrails—that in an upcoming battle a leader will be saved, and the savior will lead—Moses shrugs it off. And even when he does rescue Ramses from impending doom, he takes pains to minimize it. Prophecy, schmophecy.

Not Ramses, though. Even though the prince loves Moses like the brother he grows up to be, the foretelling now makes him a foe. And when Ramses hears rumors that Moses might not be Egyptian at all—that he could be, of all things, a Hebrew, one of those who were enslaved by the Egyptians 400 years earlier—Ramses knows that Moses will have to go.

Ridley’s Ramses exiles Moses to the wastelands beyond the Nile, where Moses eventually finds Jethro and his fair daughters in the land of Midian. There, he finds a wife (Zipporah), a new life (as a shepherd) … and a new God to deal with. Moses’ own son points to a mountain and tells him that it’s sacred. “God’s mountain,” he says. And when Moses hesitates to accept, Zipporah chastises him for confusing the child.

“Is it good for a boy to grow up believing in nothing?” She asks him.

“Is it bad to grow up believing in yourself?” Moses retorts.

But when a few sheep scamper up this sacred hill and Moses runs after them, something happens to shake his agnosticism. He gets knocked around and knocked out by a landslide. And when he comes to, he sees a burning bush. Beside it, a child—a child who talks as no child should.

Exodus: Gods and Kings is, of course, based (sometimes quite loosely) on the biblical book of Exodus. It’s the foundational journal of the Jews in many respects, and a broadly inspirational one as well—a story of a people striving for freedom. Some of that shines through in this screenplay.

At first, Moses is a reluctant shepherd for his people. For much of the movie, he sees himself as Egyptian. He hates the idea of leaving his wife and son behind when he goes back to Egypt to retrieve his Hebrews. But go he does—demanding freedom for a people he barely knows from a government he actually quite likes. Even as God spares His people from most of the plagues, Moses suffers. We see it in his face when he hears the Egyptians grieve over their lost children, hear it in his voice when he speaks to Ramses. He’s not a prophet without a heart … but he is one who’s determined to see his job through to the end.

We see a great deal of strength in the Hebrew people as well. They’ve waited a very long time for their deliverance, and they’re willing to sacrifice a great deal to see it through. Miriam, Moses’ sister, refuses to fess up about Moses’ secret lineage, for instance, and she nearly has her hand chopped off for her trouble. (Moses winds up saving her—admitting to being Hebrew even if he doesn’t yet believe it himself.) And when Moses returns from exile and hides among the Hebrews, they refuse to give him up—even as Ramses hangs whole families to “encourage” informants.

Ramses, though, is not without virtue. As a prince, he clearly loved Moses. As king, he exiles Moses instead of executing him, and even arranges for him to keep his sword. Ramses also dearly loves his son, cradling him and doting on him in life. He’s nearly torn asunder by grief when the boy dies.

God is obviously a big part of the Exodus story. And while Ridley Scott doesn’t make Him central here, to both his credit and detriment the director does give Him screen time.

The mysterious boy Moses talks to by the burning bush is called (in the credits) Malak, a Semitic word for angel. And Moses himself calls the child a messenger at one point. But he clearly represents someone much, much bigger. He either is God or he speaks directly for Him, calling Moses to his sacred work and triggering the plagues as well. This God is powerful … but is shown to act like a petulant, willful child. Ramses is horrified that the Hebrews would worship a God who kills children, and Moses expresses his own moments of doubt and horror too.

Because of all that, it’s easy to see a tinge of the Gnostic concept of the Demiurge at play in this lad who would be God. (Gnosticism encompasses multiple heretical deviations from Christianity. Tendrils of it hold that the Bible is really the story of two gods—one the essentially unknowable and most-high God of the New Testament, and the other a lesser, more vindictive god of the Old Testament.)

Scott also leaves open the possibility that God is a figment of Moses’ imagination—a hallucination brought on by the rock that hit his head. No one but Moses can see Him, of course. And when the plagues are in full force, Ramses’ advisors suggest they might all be the result of naturalistic causes. Even the parting of the Red Sea feels more like a weird-but-still-natural anomaly, especially at first, than a supernatural event.

Elsewhere, a priestess cuts open a bird and scans its entrails for a sign. She appeals to her gods to cleanse the blood-red Nile to no avail. She mentions petitioning a number of gods for relief. Seti is obsessed with supernatural signs. And Ramses, who initially shares Moses’ skepticism, prays to idols, touching them tentatively. A rendition of a battle insists that he was saved “only through the help of the gods.” We see a golden calf idol at a distance.

Moses and Zipporah get married. Once alone, they kiss, exchange sweet nothings and Zipporah invites him to “proceed.” He takes off only her veil before the camera retreats. We see the same sort of scene essentially repeated many years later. A woman wears a tummy-baring top.

Battles. Plagues. Drownings. This movie suffers from its share of death and destruction.

Egypt’s horrors open with a plague of crocodiles who bloodily chomp on several fishermen and one another as well, turning the water red (by way of blood and, according to the pharaoh’s naturalistic explanation, stirring the Nile’s red silt). This affliction results in lots and lots of dead fish. Frogs and flies follow. (We see a screaming man suck in a mouthful of flies.) People get hit with huge (but not flaming) hailstones. Then Egyptians are covered in ooky sores. (Servants remove a bloody bandage from the queen’s back.) Animals die, with more blood spilling. The final plague is not so flashy, but it’s deeply chilling: We watch children breathe deeply in their sound sleep and then, suddenly, stop—their corpses cradled by grieving parents.

On the battle field, men are killed via sword, ax and arrow. Hundreds of soldiers, horses and chariots grotesquely tumble down a mountain as the pass crumbles beneath them. A man is gruesomely run over by a chariot. Flaming arrows find their way to fishing vessels, setting them and the people inside on fire. People are dragged out of their homes, beaten, whipped and hanged (or otherwise slaughtered). Buildings and vineyards are burned.

The sea comes crashing down on the bulk of the Egyptian army, drowning nearly everyone.

Moses kills a Hebrew overseer, seriously wounds another and stabs two would-be assassins. He himself is hit in the head with a rock, and his leg boasts a nasty, bloody fracture.

The Hebrews paint their door frames with the blood of sacrificed lambs.

Ramses milks venom from a cobra, apparently with the intention of drinking it. “A little venom in your blood is a good thing,” he tells Moses. “Makes you less vulnerable to the next poisonous bite.” Ramses seems to be a bit inebriated when he nearly chops off someone’s hand. Moses takes a sip, too.

After Moses has his first meeting with God, Zipporah—a woman of deep faith—tells him he’s imagining things.

“How do you know?” Moses asks.

“Because God is not a boy.”

This short sequence takes place 1,300 years before the birth of Jesus—when God, obviously, became a boy. That comparison won’t lessen the troublesomeness of seeing the Great I Am cast as 11-year-old Isaac Andrews.

But it’s not how God looks that’s the most troubling thing: It’s how He acts in Exodus: Gods and Kings.

In fairness, the original Exodus story is challenging to our modern and postmodern sensibilities of equality and human rights. It’s undeniably hard to read about the killing of Egypt’s first born and not feel a twinge of grief. But Scott’s God approaches the plagues with either the dispassion of a grim accountant or the anger of a boy who feels wronged. There’s no hint of sadness or love. And because Scott chose to portray Him as a boy, moviegoers may want to respond by sending the tyke to a timeout.

Which, given Scott’s outspoken anti-religion leanings, might be exactly what the director had in mind.

“The biggest source of evil is of course religion,” he told Esquire in 2012. When the interviewer pressed him on the point, Scott said, “Can you think of a good one? A just and kind and tolerant religion?”

Not in this movie.

Is the God Scott gives us “the God of compassion and mercy”? Rarely. “Slow to anger and filled with unfailing love and faithfulness”? Hardly. And we haven’t even begun to talk about the plot-point deviations Scott’s Exodus takes when compared to the original text. Moses? Well, he’s far more tortured terrorist than booming Charlton Heston here. Actor Christian Bale said of his character, “I think the man was likely schizophrenic and was one of the most barbaric individuals that I ever read about in my life. … He was a very troubled, tumultuous man and mercurial. But the biggest surprise was the nature of God. He was equally very mercurial.”

Not everything takes the first exit ramp off the scriptural account, though. And the resulting combination of fact and artistic license can create some pretty robust conversations about what the Bible really does say about Moses and his mission of liberation. It’s an optimistic view that’s bolstered by us seeing that the shed blood of the Passover lamb—a foreshadowing of Christ’s awesome work on the cross so many centuries later—still protects the Israelites in this tale. And Moses does indeed begin his own personal transformation when he’s called, and he does indeed fulfill God’s directive on his life, whether he really wants to or not.