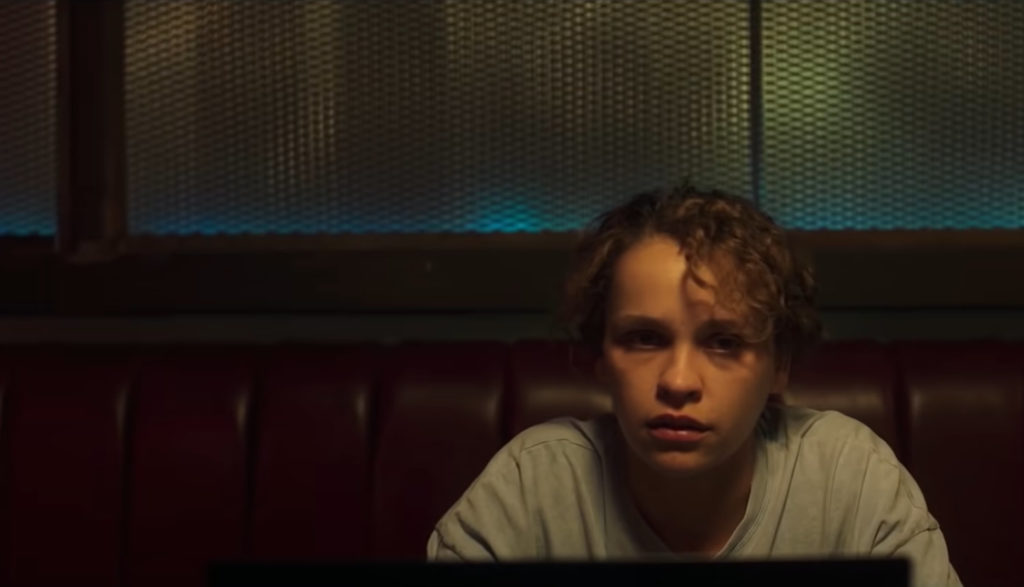 There are a ton of unclaimed cash prizes from old, retro games, we learn early in the horror thriller Choose or Die. The games were never completed because of their difficulty. Or no one ever bothered to call in to claim the winnings after beating the game. Instead, they just faded into obscurity, their potential earnings going with them.

CURS>R is one of those games, sporting a $125,000 cash prize for the first player to complete it. But unlike the rest of those contests with untapped prizes, there’s a reason why the text-based adventure game CURS>R hasn’t been beaten: People who play it usually die before they complete the final level.

Of course, Kayla doesn’t know that. She’s a programmer living with her mother while looking for work other than as custodial staff, and the two desperately need the money. So, when she stumbles upon the game, she decides to try it out, quickly discovering that the game controls reality itself.

When Kayla types in “coffee,” a waitress suddenly appears, pouring her a cup. That’s innocent, if not spooky, enough. But soon after, the game starts making her choose between horrifying things—things that are likely to get herself and her loved ones killed. She can’t stop playing, however, because the game tells her that she must choose an option, or she’ll die.

This isn’t your average Zork anymore.

Kayla wants to do everything she can to keep her mother safe. Her mother has a disease which is slowly killing her, and they cannot afford the medication that might give her a fighting chance. Because of this, Kayla’s mother has turned to using illicit drugs to numb her pain. But Kayla knows that these drugs are killing her. Her desire to earn CURS>R’s cash prize is in order to help pay for the safe and effective medication.

Kayla’s friend Isaac, who is not so subtle about his attraction to her, helps Kayla when she finds herself playing the cursed game. Even when it gives him an option to leave without her, Isaac refuses to abandon Kayla in her time of need.

CURS>R’s slogan is “Reality is cursed,” and it is clear that the game is supernatural in its function.

Elsewhere in the film, the song “West” by Ivy Sole makes a reference to a preacher’s son and heaven. “Song 32” by Noname mentions a preacher. Hal, a father who previously played CURS>R, prays lyrics from Tubeway Army’s 1979 song “Are ‘Friends’ Electric?”

[Spoiler Warning] It is stated that CURS>R is made from ancient runes which enable the game to affect reality itself. But this obvious supernatural element is never fully explored. It isn’t clear if the runes glean their power from a malevolent entity, but they are always used to cause suffering to other people. Whoever controls the runes (the “curser”) obtains benefits proportional to the suffering of the victims, including healing and prosperity.

Choose or Die unleashes suffering so violent that it makes the viewer cringe and look away. The game controls people against their will, moving their bodies after a choice has been made to complete that choice. In particular, the director seemed strangely interested in forcing his characters to suffer via putting things in or taking things out of their mouths. I’m not quite sure if that was intentional.

Hal’s wife, Laura, cuts off her son’s tongue offscreen, and we see blood dripping from his mouth. A waitress shatters glasses on the floor, and she is forced to chew the glass to clean it up as blood pours from her mouth—an officer later reports that the waitress had died. Isaac vomits up a long stream of plastic film, causing his mouth to become bloody. Another man is forced to eat his own arm, causing blood to spurt as we watch him take multiple bites out as he screams in horror.

Kayla’s mother jumps out of a window to escape an attacking rat, and we see her in the hospital. Hitch-pitched screeching hurts Kayla’s head when she doesn’t immediately choose an option in the game, and the same screeching affects Hal similarly.

Kayla references her brother, Ricky, drowning in a swimming pool. A ghost version of Ricky brought on by the game attempts to strangle Isaac and Kayla to death, and Kayla is forced to choke ghost Ricky to death to clear the level.

Laura attempts to stab Hal’s hand with a fork, but Hal grabs and twists her arm. Text from the game during the movie’s intro sequence reveals that Hal had to cause other physical ailments to Laura and Gabe, including cutting out Gabe’s eye and cutting off part of Laura’s face. A man intentionally cuts his arm with a scalpel, and blood flows from the wound. Moments later, the blood returns into his arm, and the wound patches itself up.

[Spoiler Warning] Isaac dies after vomiting the plastic film. Lance is forced to slam his face into a pile of upright, bloody needles, killing him—and we see his disfigured face. For the game’s final level, Kayla has to fight Hal to the death, but there’s a twist: If Kayla gets hurt, it hurts Hal instead, having no effect on herself—and vice versa. The two cut themselves with knives, smash their heads into tables and more in order to hurt the other. In addition, Laura and Gabe shoot at both Kayla and Hal, and Laura and Hal wrestle for the gun. Kayla sinks to the bottom of the pool to drown Hal, and we watch him die as water spews from his mouth and nose.

The f-word is used more than 70 times, and it is once preceded by “mother.” The s-word is heard almost 15 times. We also hear a couple instances of “b–ch,” “a–,” “d–k” and “b–tard.” God’s name is misused seven times and is once followed by “d–n.” Jesus’ name is inappropriately used twice. A woman calls another woman stupid for getting pregnant.

Hal’s son, Gabe, smokes a cigarette. Kayla’s mother smokes, too. Kayla’s mother is also seen with a pipe for drugs next to her. Kayla prepares prescription drugs for her mother, and she attempts to give them to her mother. Lance references providing more illicit drugs to Kayla’s mother.

Wine is seen on a table. Hal drinks a beer.

When I was younger, I enjoyed playing the text-based adventure game Zork. Paired with Zork’s written descriptions, my imagination filled the rest of the game’s world in with creations of my own wonder and creativity. Indeed, much of the fun was found in the game’s wide text recognition and the player’s own imagination.

Choose or Die deletes both of those pivotal components, leaving us with a linear adventure focused on pain and suffering. And that makes things significantly less enjoyable—to say the very least.

In the film, the game CURS>R gives its players two options, forcing them to pick between the two or die. Whichever option they pick occurs in the real world—even to the point of compelling people to perform certain actions against their will. While the options start off innocently enough, the game quickly devolves into intentionally causing as much pain to others as possible. And it does so in increasingly horrific, graphic and bloody ways.

During each session of the game, the main protagonist, Kayla, desperately chooses between two options, attempting to survive the level. But by the end of the session, she leaves a trail of blood and bodies behind her. Choose or Die wants to focus on the pain its characters endure like it was auditioning to be included into the Saw series—except, unlike Saw’s villain Jigsaw, this game isn’t meant to show its contestants the value of life, so it doesn’t even have that going for it.

Gruesomely violent scenes bathed in blood are interspersed with harsh language, including north of 70 f-words and many misuses of God’s name. The atmosphere of the movie is consistently melancholic at best and outright foul at worst.