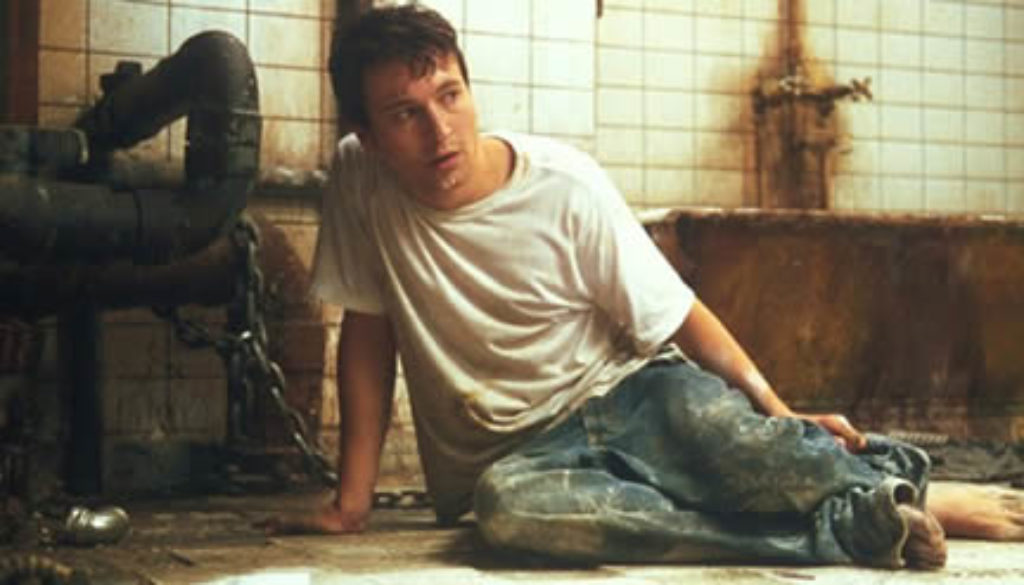 Two men wake up chained to the rusty bathroom pipes of a skuzzy underground chamber. Between them lies a man faced down in a pool of blood—with a revolver and a tape recorder in his hands. As they listen to the tapes placed in each of their pockets, they discover they’re the next victims of a psychopath. One of them, Dr. Lawrence Gordon, is told to kill the other man (Adam) within eight hours. If he doesn’t, his wife and daughter will die.

Lawrence and Adam are left to gradually uncover inconspicuous clues and strange items—including a single bullet and two saws too weak to cut through metal but strong enough to pierce flesh. As Lawrence recollects his involvement with detectives on a case a few months earlier, he pinpoints the mastermind behind this cruel “game”: a serial kidnapper named Jigsaw. But why has he been targeted? And what does Adam have to do with anything? More importantly, how far will each man go to survive?

(Or maybe it’s not all that important after all.)

In a (very) twisted sort of way, the movie highlights living gratefully. The mentally deranged villain is obsessed with teaching people to appreciate life, to the point that he places them in life-or-death situations that, should they survive, will teach them to be thankful for their next breath.

(Only one person trapped by Jigsaw has survived, though—a statistic which seems to undermine the “positive” lesson supposedly intended.)

Family is of the utmost importance to Lawrence. Despite his workaholic nature and frequent absence when his wife and daughter need him most, the doctor desperately wants to be reunited with them. In their search for escape, Adam and Lawrence are forced to trust and rely upon each other.

Adam sarcastically says his chained condition is the “most fun I’ve had without lubricant.” A detective makes a remark about a pedophile dentist. Lawrence is having an affair with one of his medical students. In a flashback she’s seen taking off her shirt. (Cleavage is shown before he stops her.) Other affairs are insinuated. Adam crudely talks about wealthy men’s sexual involvement with their secretaries, and later makes an obscene joke about the doctor’s sex life.

The sheer premise of this movie invites buckets of blood, guts and gore—and Saw certainly lives up to expectations. From the first scene to the last, blood flows, flies, spews, spatters, gushes and gurgles. The blood-covered body lying between Lawrence and Adam is a staple of virtually every “chamber” scene (a location that dominates the movie’s screen time).

Jigsaw’s torturous antics are depicted case by case in full visual detail and repeated several times via flashbacks. A man dies suspended in mid-air by a web of barbed wire cutting deeply into his flesh. The charred face of a victim who ended up setting himself on fire is shown up close. A woman whose jaw is wired to explode retrieves a key from the stomach of a living (drugged-up) man. After stabbing him repeatedly, she hoists his innards in the air.

During a face-to-face confrontation between detectives and the alleged mastermind, a torture machine comes close to drilling through a victim’s skull. The showdown ends with one officer getting slit in the throat and his partner getting shot repeatedly. (Again, the camera lingers on close-ups of the gore.) Lawrence and Adam are both jolted harshly with electricity administered through their chains. As Lawrence’s wife attempts to flee her kidnapper, she stabs him in the leg. The initial cuts of a ghastly amputation appear in detail. And in what may be the film’s most gruesome scene, a man’s head is pounded with a slab of concrete. Gun battles end with casualties.

More than 25 f-words (including ones used in sexual contexts and ones linked to “mother”). A dozen-plus s-words appear in various forms. Jesus’ and God’s names are abused.

Jigsaw’s only surviving victim, Amanda, admits to being a drug addict. Despite her torture experience (which includes killing a man who’s high on heroin), she claims Jigsaw helped her, and we’re left to draw the conclusion that she is now drug-free and credits the villain with her recovery. As they break from their investigation, several officers talk about going to drink beer. Adam is willing to risk everything for a cigarette left in a box by Jigsaw. He later smokes one.

Though not as gory as the rest of the movie’s violent scenes, the kidnapping of Lawrence’s family is just as intense, particularly because it involves his young daughter. Her screams of “Why!?” combined with her mother’ desperate pleas to their cold-hearted kidnapper make for a disturbing sequence.

It’s as if rookie director James Wan was trying to re-create (and at the same time radically amp up) the mesmerizing yet desensitizing effect TV’s CSI franchise has on audiences. In warped fashion, Saw’s goriest scenes—from mutilations to amputations—become freeze-frame shots, as if to intimate that treating the subject matter like a crime-scene investigation somehow excuses over-the-top violence and gore. For Wan, detective work as a plot point must mean nothing more than an opportunity to display graphic, up-close depictions of unthinkable cruelty—with lots of obscene language added for full effect.

The graphic movie Se7en is the closest cinematic comparison point we can come up with here. And like that film, Saw has a few clever moments of tension (using a camera’s flash as the only light source during an intense hunt for an intruder, for instance). But its shock factor is strictly based on the glorification of a psychopath’s inhumane mind games. So touting torture as a treat becomes its beating heart—something that should automatically send most morally minded moviegoers running for the exits. And yet, sadly, it won’t.

In all honesty, perverse pictures weren’t the most disturbing things we saw while reviewing Saw. It was disconcerting enough to sit in a theater full of mothers with their 8-year-old boys in tow and groups of 12-year-old girls chaperoned by solitary adults. It was nearly intolerable to witness them—kids and adults—applauding when a man onscreen got his brains bashed in. And laughing when Lawrence sobbed helplessly on the cellphone while his wife and daughter struggled at gunpoint with their kidnapper.