Ava could’ve done whatever she wanted for a living. Lawyer? Sure. CEO? Why not? Spinning instructor? She’s quite fit, and you just know she could pedal with the best of them.

But her yen for booze and drugs spun her life out of control before it’d barely begun. The high school valedictorian was involved in a car crash that injured two other students and earned her a police record. Just like that, Ava’s options were winnowed down to somewhere between few and none. So she decided to enlist in the Army.

There she met a guy named Duke. And he introduced her to a career she’d never even thought about.

Ava’s an assassin now, and naturally she excels at it. She’s had a role in planting dozens of people in the ground, and she’s reaped her due rewards.

But down deep, she’s still that girl from Boston who hoped for something more. She feels the tug of remorse for her deadly dealings. Sure, Ava’s told that the people she plugs deserve their fate. But sometimes, the assassin feels the need to ask for confirmation before she pulls the trigger or carves the knife. What did you do? She asks. Why are you about to die?

That’s sort of a no-no in her line of work. “Yours is not to reason why,” Duke tells her, quoting a line from Lord Alfred Tennyson’s poem “The Charge of the Light Brigade”. “Yours is to do or die.” Duke worries whether she might be losing it—that she might turn back to her addictions or, who knows, just fly off script. He thinks the world of Ava, but Duke knows as well as anyone that an assassin that can’t be trusted is either a danger to the organization—or better off dead.

Ava assures Duke she’s just fine. But she admits she could use a little time off. She’d like to go back to Boston for a bit. Her father died, and she hasn’t seen her mother or sister for eight years now. Maybe it’s time to visit. Reconnect a little. Maybe try to patch up some old wounds.

But her trip back may entail suffering—and inflicting—some new ones.

The killers we meet in Ava are surprisingly nice, given their line of work. Duke loves Ava like a daughter, and they’re as loyal to each other as they can possibly be. Simon—another one-time pupil of Duke’s who’s now the man calling the literal shots—has a certain honor about him, too. He doesn’t know Ava and doesn’t trust her a whit. But he holds a deep respect for Duke. Granted, all three are in a grim, compromising business. But if they ever feel the need to betray one another, they certainly wouldn’t feel good about it.

But back in Boston, Ava has other priorities: her family. While both her mother and sister are pretty hard to get along with (and harbor some understandable bitterness over Ava’s long absence and failure to help with her dad’s funeral), Ava does her best to spend some time with them and to help where she can. And when things take a dangerous turn for her family, Ava goes to some serious lengths to protect them and, in some cases, to save them from themselves. She’s not the ideal daughter or sister perhaps, but she’d be willing to shed plenty of blood, sweat and tears for them. And sure enough, she does.

Ava’s sister, Judy, has a cross hanging in her apartment. Ava and Judy visit their mother in a hospital garden, and we see a religious statue (including a cross) in the background. Ava’s mom (Bobbi) often superstitiously knocks on wood—and she asks her daughters to do the same. We hear about a christening ceremony. A religious mural graces the wall of an illegal gambling parlor/nightclub.

Ava’s job sometimes requires a certain, shall we say, intimacy with her subjects. She lures one victim up to his hotel room with her (telling him that she’s a bit of a “slut”). And while we don’t know whether the two had sex or not, the man is partly undressed when she, um, reveals her true occupation. (She’s fully clothed, by the way, though wearing a slinky and cleavage-revealing evening gown.) With another person, she volunteers to sit with him in the back seat of a car and “see what happens.” (Nothing happens, other than someone dying violently.)

[Spoiler Warning] Ava has a history with Judy’s beau, Michael, and she still has feelings for the guy—so much so that she tries to make out with him and asks if he’d be willing to run away with her. (He’s not.) We learn that Michael liked both of them enough to ask each to marry him (with Ava’s proposal coming eight years before), and Judy’s pregnant with Michael’s baby.

The assassination business is, inherently, a bloody one. Ava’s official roster of kills tops out at around 40, but she kills plenty of off-book people during the movie. She guns down more than a dozen military and security guards. She shoots someone in the hand before finishing him off. She injects another guy between his toes with a drug (that’s supposed to make his death look like an accident) and shoots someone point-blank in the head. She slashes someone’s throat and stabs someone else in the jugular.

We see a montage of some of her other jobs, too: A building explodes. Blood trails through the snow. She brags that she can kill someone however her bosses would like: quickly and gently, or not so much; she can make it look like an accident or seem like the mark died from natural causes. And while the film isn’t as gratuitously gory as it could’ve been, we still see plenty of blood.

Ava doesn’t kill everyone she meets, though. She gets into her share of frenetic, nonlethal fights, too (though admittedly, they sometimes still lead to death). Fists and feet and all manner of makeshift weapons fly. She nearly chokes someone to death before letting that person go. She and an attacker engage in a lengthy fight that leaves both seriously bloodied. And some of these fight scenes are accompanied with sickening cracking sounds.

Two people get into a wild melee, with one getting stabbed and sliced in the process. In this and other fights, people crash through windows (someone’s head is forcibly slammed into one, in fact) and break furniture. A person is drowned in a lake. At least one person contemplates suicide. Various folks are threatened with knives and guns. Several get knocked out. People smear blood on themselves sometimes, wash it off at others. Smoke grenades go off.

Ava is both an alcoholic and recovering drug addict. A police report tells us that not only was she drunk at the time of her high school-era DUI, a “controlled substance” was found in the car, too. Duke talks some about how he helped her get clean (despite at least one relapse), and someone else alludes to helping her after Ava was found “half dead with a needle stuck between her toes.”

But alcohol’s temptations continue to pull at Ava: She orders a double Scotch at a hotel bar, and she inhales its odor before setting it down and leaving. The tiny bottles of booze in her hotel minibar draw her as well. (In a bit of a spoiler, she does succumb to their temptations eventually, the miserable assassin quaffing several bottles before turning her attention to other matters.) In an Alcoholics Anonymous meeting, she tells attendees that she’d been caught stealing money for drugs before. (Ava, working under cover, also seems to hold a glass of champagne, but we don’t see her drink it.)

She’s not the only one in her family who might have issues. During a dinner, Judy reminds the waitress that Ava can’t drink, then proceeds to drink wine and down an alcoholic shot in quick succession. When she starts saying some hurtful things, boyfriend Michael tells her that she’s drunk. Others drink wine, beer and champagne.

Ava smokes cigarettes on occasion. Ava’s mother worries that her daughter wants to “drug me up and then throw me away in the looney bin” when Ava mentions that Mom should look into some OCD medication.

Michael has a serious gambling addiction, and he’s in hock to a malicious gaming matron to the tune of $75,000. (Judy thinks it’d be just fine if he simply bet on racing, but he always loses at table games.) We see people gambling in a secret gaming parlor that can only be accessed through a porta-potty with a false back.

Characters lie to each other. We hear that Ava vomited all over someone’s floor sometime in the past.

If movies truly reflected the real world, we’d surely see “assassin” crop up on many a high school career exam. Hollywood tells us that contract killing is a growth industry. And given the nature of the business, you’re always liable to find plenty of vacancies.

Ava is yet another movie about an assassin with a heart. Maybe it’s not a heart of gold, exactly, but at least a heart of bronze, willing to sacrifice for those she loves even as she sacrifices plenty of lives along the way.

The movie, naturally, doesn’t sacrifice the use of blood. We see plenty of that, as well as people killing and being killed in a number of painful ways. Did they deserve it, as Ava asks? Well, biblically, that’s up to God to decide—not Ava or Duke or anyone else. And given the film industry’s infatuation with indiscriminate murder, that basic spiritual truth is an important thing to remember when thinking about such stories.

The blood and death isn’t Ava’s only problem. This is rated R for plenty of reasons. But for an R-rated thriller, the content here is pretty rote—just like the thriller itself.

Perhaps we’d all have been better served if Ava had become a spin instructor after all. 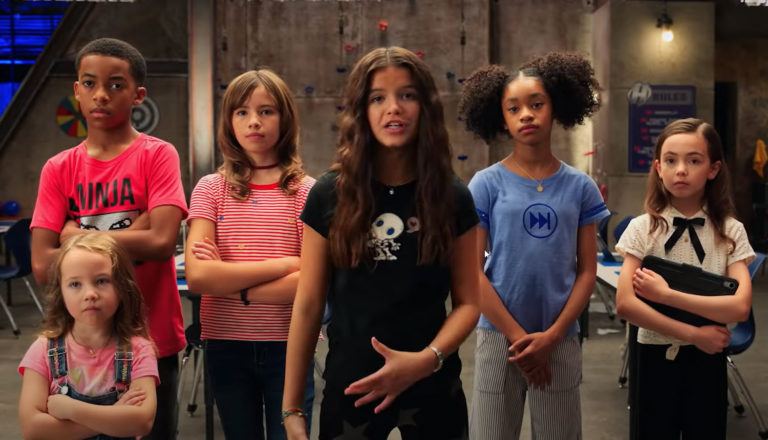