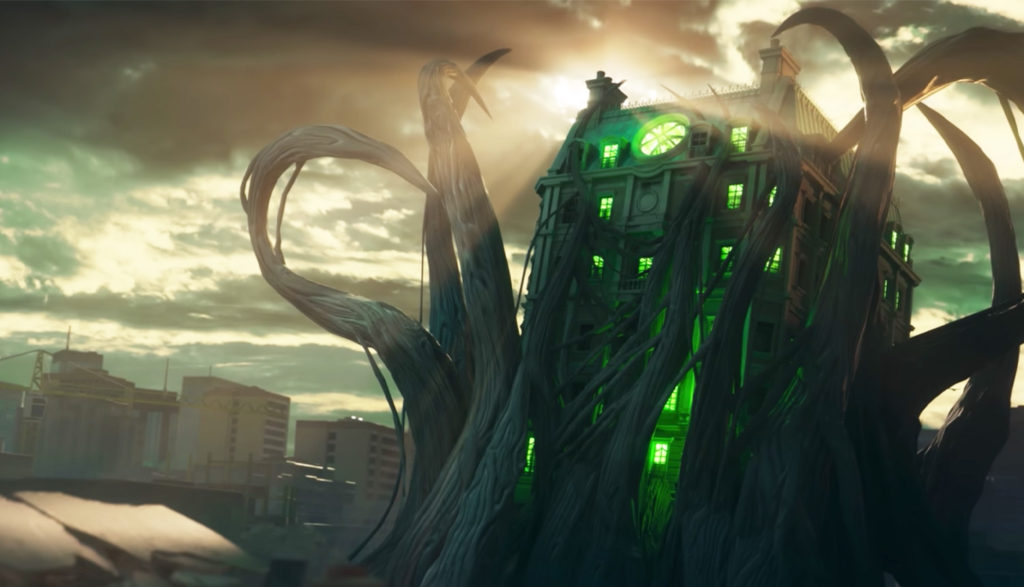 Marvel’s Midnight Suns is a turn-based tactical combat game that’s very similar to Firaxis’ genre-defining XCOM games. Only, in this case, instead of using soldiers to fight against alien invaders, gamers pit superheroes and demons against one another; and instead of dice-rolls and hit percentages, the battlers get a deck of cards.

The game story starts with the Avengers (having already beaten major threats from Ultron and Thanos) now being faced with something eminently more dangerous: demons and magic. HYDRA soldiers have resurrected a demonic powerhouse called Lilith. And the Avengers quickly realize that their super skills and techy genius won’t really cut it against supernatural magic.

So, Iron Man and Captain Marvel first turn to Doctor Strange and his new apprentice, Scarlet Witch. Then Strange leads them to a magic-wielding crew of young heroes called the Midnight Suns.

Gamers play as the resurrected half-human, half-demon child of Lilith called The Hunter (a character they create in whichever gender image they desire.) It turns out that this magical powerhouse fighter once fought his/her mom to the death years ago. But now The Hunter and Lilith have both been magically resurrected for a new family showdown, a prophesized entry point for a deadly eldritch god. It’s up to you and your team of old and new heroes to battle with Lilith and her team of demons and HYDRA soldiers and try to save the world from destruction.

Along with outright tactical battles, The Hunter (you) must also deal with the inner relationships between the Avengers team members and the young magical upstarts of the Midnight Suns. Various interactions and conversations help determine the characters’ friendship meters, which in turn impacts their play together on the battlefield.

Battle wise, the missions are structured around a turn-based tactical combat system in which players guide the movements, attacks, and defenses of their characters. Again, if you know the way an XCOM game works, it’s very similar.

The difference here is that there’s no dice roll that might lower the chance of hitting an enemy mark. Attacks always land. In place of that dice roll is an individualized deckbuilding card system. Each character can only bring a deck of 10 cards per battle (representing attacks, skills and heroics), and they draw a limited number of those randomized cards each turn. This keeps the individual character decks small enough to manage but large enough to give players the possibility for different strategies against unique enemies.

Midnight Suns’ battling gameplay introduces new cards and characters on a regular basis (along with character upgrades) and that keeps the tactical conflicts fresh-feeling throughout the game. The T-rated battle effects are superhero dynamic and colorful.

The game emphasizes the idea that being a hero means helping those in need and doing what’s right even when the going is tough. In addition, it uses social scenarios and conversations to create relationship-building moments for a team that starts out slightly at odds—delivering the message that working well together is an important part of teambuilding. The potential tactical strategies on the battlefield reemphasize this point as well.

Demons and demonic powers are everywhere. The game doesn’t define the spiritual side of things beyond a good-vs-very bad setup. But there is definitely a celebration here of supernatural powers of every stripe—especially on the heroic side of the equation. We see a dark ceremony that raises a character from the dead.

And, of course, violence is a huge part of the ongoing action. Characters use magic blasts; raging flames; melee blades, whips and cudgels; and various firearms to attack each other. And the flaming skull character Ghost Rider can push foes into the pits of hell. (Bloodletting is minimal, characters crumple over and disappear when bested. Good guys take a wounded knee in hopes of revival.)

Lastly, though there’s no sexual interaction between characters, there is an inferred gay relationship, and some skimpy costumes and swimsuits are in the mix.

Marvel’s Midnight Suns is a well-crafted tactical battle game that’s driven by interesting characters and fun gameplay. Whether or not you play it really all comes down to how comfortable you are in paddling beyond superhero battles and into the demonic deep end of the Marvel pool.