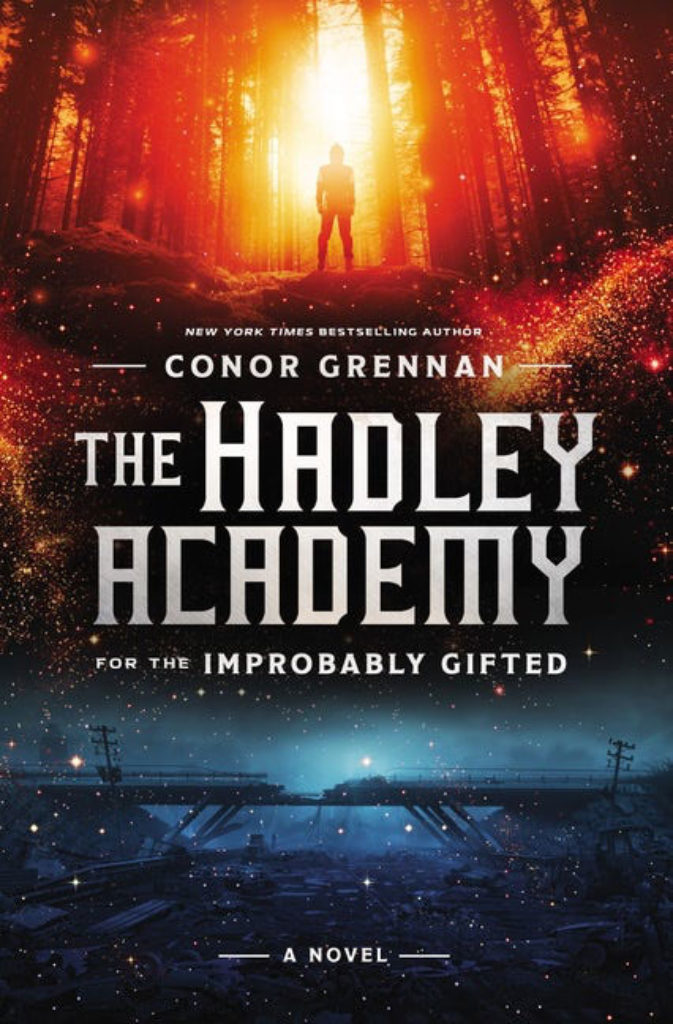 The Hadley Academy for the Improbably Gifted by Conor Grennan tells how Jack Carlson and his improbably gifted teammates keep The Reaper King from darkening all human souls. It is the first book in the “Hadley Academy” series.

Eighth grader Jack Carlson usually rolls his eyes at his friend Freddy’s conspiracy theories. It’s no different this time, when Freddy talks about a secret military school called Hadley Academy for the Improbably Gifted. Freddy says the Academy recruits young people with unique abilities to save the world.

When a stranger named Hans gives Jack an ancient coin and pulls him through a portal, the boy finds himself at Hadley. The coin convinces Hadley superiors that Jack is the Guardian from a prophesy made 1,000 years earlier. Only this Guardian can kill an evil enemy known as The Reaper King and save humanity.

Hadley’s 12 teams of recruits have already been formed. Each student is an Improbable, someone willing and able to find the superpower within. Each fits into one of four classifications based on his or her gifting: the recruit is Kinetic, Theoric, Systemic or Expathic.

Jack watches them being sworn into service. Because of his arrival, the superiors decide to form a 13th team. Several other kids arrive to be his teammates, one of them being Freddy.

Like Jack, the other Thirteens begin as Dormants. They don’t seem to have any special powers. Before long, the others — Voss, Asha, Freddy and Claire — begin to discover their powers. Jack doesn’t understand why he’s at Hadley, and the superiors begin to wonder as well.

Jack learns the Guardian prophesy is the last in a series of prophesies that have already come to pass. The Reaper King, a man named Wyeth, darkened people’s souls and turned them into killers called Reapers. According to one prophesy, a Hadley recruit named Vladimir killed Wyeth 13 years earlier. Hadley has recently seen activity that has caused them to wonder if Wyeth is actually dead. They suspect someone may be helping him, and they even speculate that Vladimir may have switched his allegiances.

Jack learns an ancient evil spirit called The Shadow inhabited Wyeth so he could control the world through The Reaper King. The Shadow knew people who chose goodness and self-sacrifice would be more difficult to control than those who thought only of themselves. That’s why Wyeth created Reapers, to prey on “roots,” or people who stood out and made a positive difference in the world.

A training simulator called The Dome summons team Thirteen, and they battle Reapers at various large gatherings. Jack and his teammates begin coming to some disturbing realizations. They discover the “simulations” are actually real-life events and that Wyeth has been using them in his evil plot — though they thought they were doing right.

When Jack and Claire travel to the dragon-infested lands beyond the Academy, they discover members of the sect who prophesied about Jack being Guardian. Jack’s adoptive mother is there, and she explains how she always knew what he would become. She also makes the ominous prediction that The Reaper King will win the war.

As Jack, his teammates and Hadley superiors continue to track Wyeth, Jack comes to the horrifying realization that Wyeth lives within him. The boy has long been prone to blackouts, and he now sees how Wyeth used his body in those times to gain access to Hadley intel and equipment.

Wyeth inhabits Jack as he and his accomplice continue to frighten citizens and darken their souls. Jack digs deep within himself, finding just enough strength to jump from a plane. The fall kills Wyeth. Jack is unconscious for several months and wakes up at Hadley under the care of his mother and friends. He learns he died for three minutes before returning to life after his sacrificial jump.

Jack discovers Hadley’s own technology has rendered it impossible for him, his friends and staff to leave the island or communicate with the outside world. He begins thinking like the Guardian he’s called to be. He and his teammates look for ways to get off the island and try to prepare themselves to battle whatever chaos may be taking place in the world outside.

There are underlying themes of light vs. darkness, a Guardian/savior to bring the world out of darkness, an ongoing message that this can only be done through self-sacrifice, an evil shadow that wants to darken people’s souls, etc. But nothing overt points to a biblical worldview.

The students have supernatural powers (Kinetic, Theoric, Systemic, expathic). Wyeth is within Jack and can possess him.

Hadley leaders train their recruits to be battle-ready and practice self-sacrifice for the good of the many. Wyeth, possessed by an ancient Shadow spirit, sets out to darken human souls. He plans to tear down the world to rebuild it his own way.

Jack’s mother adopts him as a baby, even though she knows he is partially possessed by Wyeth’s spirit. Cynthia Thayer, an inmate in the Hadley Asylum, terrifies her daughter, Asha. Cynthia helps Wyeth with his evil plans.

One Hadley employee mentions that teams challenge each other to bloody fights to the death every five years so they will be prepared for the worst in battle. People really die, but the death is only temporary.

Drugs: The text briefly notes Freddy’s mom is a recovering meth addict, and his father works three jobs to pay for her institutionalization.