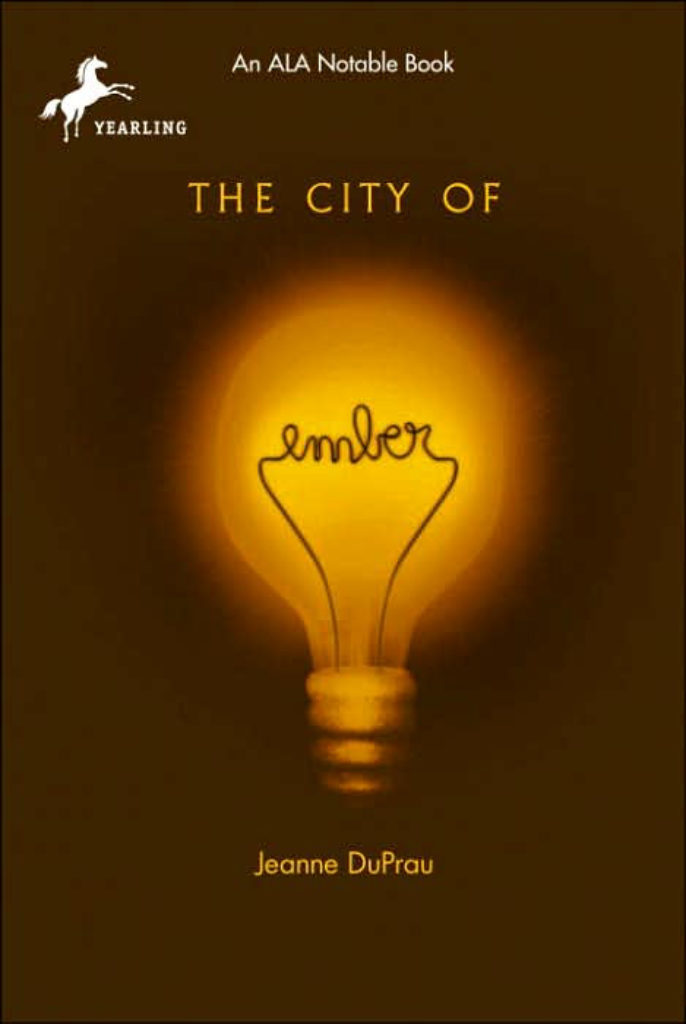 The City of Ember by Jeanne DuPrau has been reviewed by Focus on the Family’s marriage and parenting magazine. It is the first book in the “Book of Ember” series.

Lina Mayfleet and Doon Harrow live in the underground city of Ember. Generations earlier, people known as the Builders created the city. They feared their world was headed for catastrophe and wanted to start a new world in Ember. They secretly left Instructions so that the citizens of Ember would eventually know how to return to the upper world. The Instructions were locked in a special box, set to open on a specific date about 220 years in the future. The box was passed down from mayor to mayor, until one mayor lost the box. He died shortly thereafter. The box opened on its intended date, but no one knew.

Current Ember residents don’t know about the Instructions. They wonder whether anything exists outside their city. Some think there is more. Lina envisions another city that is gleaming white. Some don’t think there is anything beyond the city limits.

A group called the Believers thinks the Builders are coming back to save everyone someday. Meanwhile, Ember is in shambles. Supplies of every kind are scarce, and everything is in disrepair. Sometimes, the city lights go out and leave everyone in darkness. The residents never know if the next blackout will mean the end of their civilization.

When children reach the age of 12, they draw the name of the job they will perform for the next three years. Lina draws Pipeworks, which means she’ll have to work in the dangerous water and power system. Her estranged best friend, Doon, draws Messenger. Lina is jealous, as that was the job she wanted most. She’s surprised when Doon asks her to switch jobs with him. He is upset about the deterioration of the city and wants to see if he can find any answers in the Pipeworks system. Lina happily trades with him.

Lina’s parents have died. She lives with her baby sister, Poppy, and her grandmother. Grandmother grows more and more forgetful, but she keeps looking for something specific. She tears the closet apart in her search, and Lina discovers an old, fancy box with a lock. Poppy partially eats the paper inside before Lina sees it, but she can tell it’s important. She tries to decipher the strange, typewritten message. Grandmother dies, and a neighbor named Mrs. Murdo takes in the girls.

Doon discovers the mayor and a man named Looper are hoarding supplies while telling the general public the items have run out. Lina’s friend, Lizzie, makes friends with Looper and learns she can get these rare items, like fruit and colored pencils and paper. She offers some of these things to Lina. Lina is tempted, but she knows it’s wrong to take from the citizens this way.

Lina and Doon try to piece together the message from the old box. They decide to tell one of the mayor’s guards about the mayor’s illegal hoarding. This only gets their names put on a “wanted” list. They’re running out of time when they finally piece together enough of the Instructions to realize they point to a way out of Ember.

The two follow the Builders’ directions to a door in the Pipeworks. Inside, they find a huge room full of boats and supplies that will allow all of the citizens to leave. Lina and Doon plan to announce what they’ve learned at an annual singing celebration.

But the mayor’s men capture Lina, so plans change. She gets away, finds Mrs. Murdo and takes Poppy from her. Lina, Doon and Poppy get on one of the boats and follow the rushing river out of Ember. They end up in a land with a sun and a sky that amazes them. They discover Ember is under the ground below them. They can’t return the way they came, so they write escape instructions, tie them to a rock and throw it down to the city.

Members of a group called the Believers often hold hands and sing loud, shrill and happy songs in public about their assurance that the Builders will return to save them. Lina’s boss, Captain Fleery, is one of these Believers. When Lina expresses concern about the state of the city, Captain Fleery says she shouldn’t worry so much because help is coming. Captain Fleery says she knows this in her heart, and she has seen it in a dream. She invites Lina to one of the Believers’ meetings and urges Lina to rest and clear her mind. Lina knows she’ll never go to a meeting because she has better things to do than wait around for the Builders.

Doon’s father is supportive and loving. He tries to help his son navigate the challenges of life in Ember. Lina’s parents are dead. Her grandmother dies in this story after the old woman becomes increasingly forgetful. A neighbor named Mrs. Murdo graciously takes in Lina and her sister. The mayor and a man named Looper are hoarding supplies while telling the general public the items have run out.

Lying: The kids sneak out of the house and into the Pipeworks when it isn’t open. Doon sometimes lies to his father regarding his whereabouts.

Allegory: It is uncertain whether this book is an allegory. Some say the Believers represent religious people because they don’t consider acting on situations they are in. Instead, their false hope in the Builders keeps them going. Others seem to think the Believers are mediocre Christians who don’t live out their faith. They see Lina’s and Doon’s lives as representative of true faith because they are following the instructions of the Builders (i.e., the Bible).