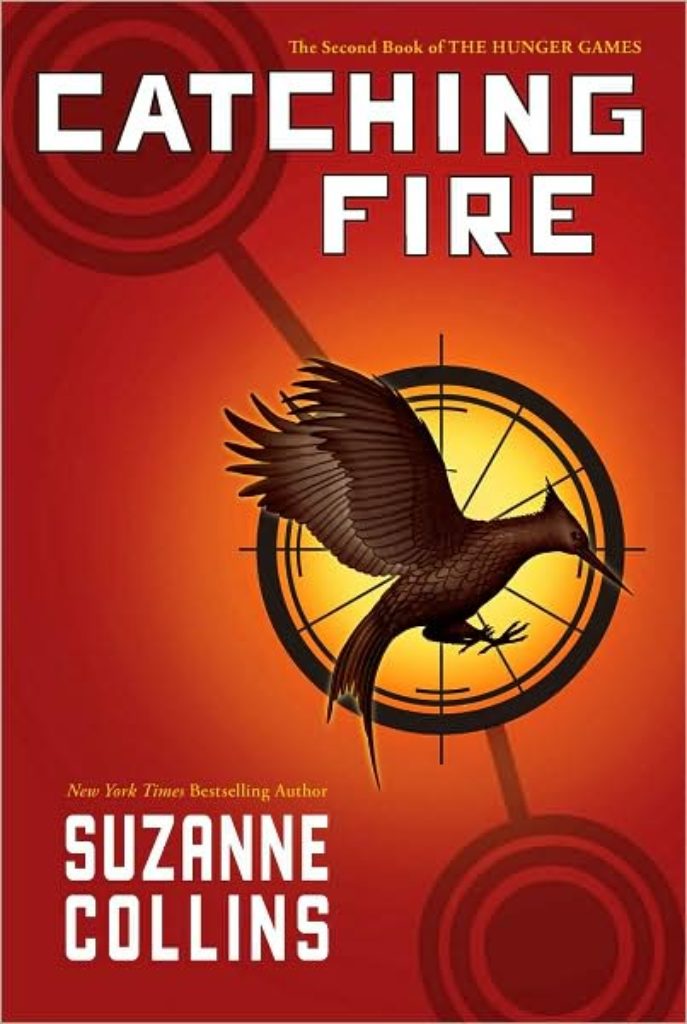 Catching Fire by Suzanne Collins has been reviewed by Focus on the Family’s marriage and parenting magazine. It is the second book in the “Hunger Games” series.

The Hunger Games is an annual televised event in which the dictatorial Capitol of Panem forces two teens (called tributes) from each of its 12 districts to fight to the death.

Katniss Everdeen and her District 12 counterpart, Peeta Mellark, survived the 74th Hunger Games. As champions, they returned home to wealth and fame. But like most Games survivors, their nightmares about the deaths and brutality they witnessed in the arena overshadow their victory. Katniss also fears the wrath of the Capitol leaders. Her subtly subversive actions in the arena rendered her a symbol of revolution for the districts. Panem’s President Snow visits Katniss at her home, confirming that one more slip on her part will spell torture and death for her or her loved ones.

Katniss and Peeta take their obligatory Victory Tour by train through the 12 districts. Under orders from President Snow, they maintain the pretense of their undying love for one another. Peeta does love Katniss, but she is torn between her affection for him and that of her District 12 hunting partner, Gale. Though Peeta and Katniss play their roles, announcing their engagement and talking up their wedding, they inadvertently add fuel to the fires of revolution.

Katniss’ fears and nightmares increase as she hears about various districts revolting. She devises a plan to escape into the woods outside of her district with her friends and family. But when Peacekeepers nearly beat Gale to death, Katniss realizes she must stay and fight for change for her people.

President Snow, determined to quiet Katniss and the revolution, rules that the next Hunger Games will consist of tributes who were former champions. Since Katniss is the only girl from her district to ever have won the Hunger Games, she will automatically return to the arena. Peeta volunteers to be the other tribute from District 12 and Haymitch, the only other District 12 winner in history, mentors them as he did in the first Games.

Haymitch insists Katniss and Peeta work with tributes named Finnick and Johanna in the arena. Katniss is skeptical of forming any alliances but follows Haymitch’s directions. She’s confused when Finnick and Johanna save and protect her and Peeta rather than allowing them to be eliminated from the competition.

The arena, a high-tech stadium that resembles a beach with a jungle around it, operates like a giant clock. Each hour brings a new form of torment, from natural disasters such as lightning storms to birds whose cries are engineered to sound like the tortured screams of the tributes’ loved ones. When only a few tributes remain, an old, seemingly crazy tribute shows Katniss and her team that a wire he’s created may be able to electrocute the remaining tributes if paired with lightning. Katniss and her allies help him rig the wire, just before the lightning strike leaves Katniss unconscious.

She wakes on a padded table with tubes in her arms. Believing the Capitol is planning to torture her and Peeta further, she tries to escape. Then she learns she is with Haymitch, Finnick and Johanna, headed to District 13, a region thought to have been destroyed long ago. Katniss learns Haymitch and the others, along with the new head Gamemaker, are helping stage a rebellion against the Capitol. The lightning strike against the wire was part of a plan to allow the tributes to escape from the arena. She responds in rage, feeling her friends used her. Gale comes to see her. When she asks about their home, he delivers the cryptic message that “there is no District 12.”

Katniss’ mother gives her a pin for good luck. Katniss worries that many people’s fates depend on her.

Haymitch, a friend and mentor to Peeta and Katniss, is a former Hunger Games champion. His horrible memories drove him to alcoholism. President Snow, a heartless dictator, has breath with such a strong smell of blood that Katniss wonders if he drinks it. He devises a number of schemes to frighten and/or eliminate her. Katniss’ mother suffered severe depression after Katniss’ father died several years earlier.

Prior to her time in the Hunger Games, Katniss served as sole provider for the family and harbored anger for her mother’s emotional abandonment. Katniss now allows her mother back into her life and gives her opportunities to reclaim her role as caretaker for the family.

Katniss shouts obscenities a few times, though no curse words appear in the text. Knocked up is used to describe both Katniss and her sister’s goat. Peacekeepers put a bullet through an old man’s head when he whistles a subtly rebellious tune. A Peacekeeper nearly beats Gale to death, leaving the skin on his back mutilated like a “raw, bloody slab of meat.”

Capitol leaders commonly cut out the tongues of people who disobey them, leaving them as servants called Avoxes. Katniss dreams about being forced to watch as someone’s tongue is cut out. She also has night terrors about other tributes pursuing and killing her and about her father being “blown to bits” in a mining accident. She often daydreams about killing President Snow. Leaders execute the head Gamemaker of the 74th Hunger Games because he allowed Katniss to spark a rebellion.

Peeta and Katniss watch videos of former tributes in the arena. One is skewered through the head by sharp bird beaks while another bleeds from an empty eye socket after an axe wound. Katniss remembers a former tribute known for ripping open another tribute’s throat with her teeth. Peacekeepers brutally beat Cinna, Katniss’ prep team leader, in front of Katniss as she waits to enter the arena. When many tributes die early in the Games, the waters and beach are bloodstained and covered with bodies. One tribute flails and contorts as she’s enveloped by poisonous fog. Katniss and her allies battle and kill mutant monkeys.

Katniss kisses Gale a couple of times and Peeta a number of times. Cinna kisses Katniss goodbye before she enters the arena. Katniss recalls a former District 12 Peacekeeper who lured starving young women into his bed by offering them coins or food. Katniss and Peeta often sleep in the same bed in each other’s arms so they won’t have nightmares. There is no mention or insinuation of anything sexual. Katniss even says that “nothing else happens” but sleep, though their bedroom arrangements cause people on their Victory Tour train to gossip.

Peeta lies and tells the viewers Katniss is pregnant in hopes of gaining sympathy and/or keeping her out of the Games. Another tribute tells Katniss she’ll rip her throat out, even if she is “knocked up.” Peeta tells Katniss the other tributes are teasing her because they perceive her to be very pure.

Alcohol/Substance Use: Haymitch, an alcoholic, is rarely sober. Katniss and Peeta help get him alcohol, partly because they’re afraid that without it he’ll drink something more dangerous, such as rubbing alcohol. Katniss’ prep team members are nearly incoherent from alcohol at one of the Capitol celebrations. The prep team shares bright colored pills to keep them going early in the morning. They also give Katniss sleeping pills to help stop her nightmares, but she only finds it harder to sleep. The tributes from District 6 are known “morphling” addicts.

Overindulgence: Excess is a trademark of the Capitol residents. Both men and women wear bright makeup and gaudy clothing; Katniss almost pities them for being so blind to their frivolity. At a Capitol party, Katniss and Peeta are disgusted to learn that vomit-inducing drinks are neatly set at the buffet table. This affords guests the opportunity to stuff themselves, throw everything up, and then eat more.

Modesty: One tribute wears a net “strategically knotted at his groin” so he isn’t technically naked. A female tribute runs around nearly naked during the opening ceremonies, sometimes oiling her body.

Lying: When Katniss buys alcohol for Haymitch, she says it’s for her mother to use in making medicine. Katniss’ friends and family say that Gale is her cousin (not a potential boyfriend) so she will be allowed to see him. Katniss and her prep team lie about Katniss having a talent for clothing design, when her prep team leader has actually created the sketches. Peeta lies to the viewing audience about Katniss being pregnant. Katiniss and her loved ones tell other lies to the government to protect themselves.