For 15 Seasons, Supernatural Talked a Lot About God (But Didn’t Know Him Very Well). 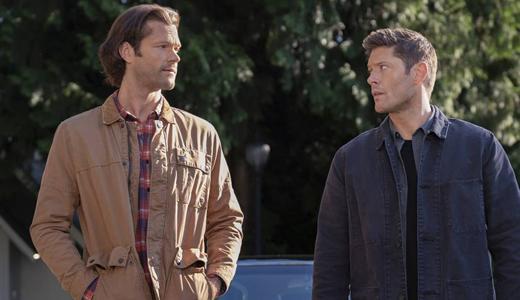 Supernatural finally ended last month after its 15-season run and a slight delay in production due to COVID-19. And as I reviewed the final episode for Plugged In, I began to ponder how much the show had changed over the years.

Sure, the show has always been based on, as you might guess, the supernatural, much of it hinging on what Christians would call spiritual warfare. And Sam and Dean Winchester never lost sight of their purpose: saving people, hunting things—the family business. But there’s a stark difference between the first five seasons—which largely focused on the boys helping their dad avenge their mother’s death—and the final ten.

Long story short, their mom was killed by a demon working for Lucifer (aka Satan). They face off with and beat the devil in Season Five, and the biblical apocalypse is averted.

That was supposed to be it. Done. Fin. The End.

But as I explained in a blog last year, the show’s passionate  fanbase allowed it to be renewed for an unexpected sixth season, and all the seasons thereafter. So, if the Winchesters had already defeated the ultimate bad guy, Satan himself, what exactly did they do over the course of the next 10 years?

Well, as I said before, they continued to hunt ghosts and monsters. But considering this isn’t a formulaic police procedural, that’s not really enough to keep fans entertained. The brothers needed a “big bad” to go up against. So, the showrunners got creative. They delved deeper into Christian and Judaic lore. Sam and Dean fought leviathans, fallen angels, and the “King of Hell” (who, shockingly, isn’t Lucifer but another demon called Crowley). They ventured into Purgatory and alternate universes before, finally, the writers found a big bad they could stick with—God.

I’m not going to go into a ton of details here: there’s more than 300 episodes’ worth of information. However, allow me to summarize…

God (who takes on the form of a man called Chuck within the confines of the Supernatural universe) was the “light” of the universe. He created everything (including those alternate worlds), so he was loved and worshipped. But he also had a sister, Amara, who was “the Darkness.” Jealous of her brother, she sought to destroy everything he had made. Essentially, they get into a hissy fight about who’s good and who’s evil and put the whole world at risk, which apparently—in the show’s thinking, anyway—needs a balance of lightness and darkness to remain intact.

Enter the brothers Winchester. They bring back Lucifer (because this is seemingly a world where nobody truly dies) to fight. Instead, he creates the Antichrist, Jack. And in a battle of nature vs. nurture, Jack gets pseudo-adopted by the Winchesters and becomes the weapon that ultimately defeats Chuck (who, you’ll remember, is God) and Amara, thereby keeping that oh-so-delicate balance of good and evil.

Yeah, mull over that for a moment.

The idea of cosmic balance, or duality, is nothing new. We see it in Eastern religions all the time with the concept of yin and yang, which suggests that light and dark aren’t so much opposing forces as they are complementary forces interacting to form a dynamic system in which the whole is greater than the assembled parts. In other words, light creates shadows.

And this isn’t the only time I’ve seen this paradox. It’s portrayed in the video game Final Fantasy XIV’s latest installment, Shadowbringers (aptly named as you’ll see). Heroes who previously fought on the side of light are taken to an alternate world where the light is evil and has taken over, and they must restore balance by bringing darkness and, therefore, shadows.

I’ve also seen this focus on a balance between good and evil in the Amazon miniseries Good Omens. Here, a demon called Crowley (though not the same one from Supernatural) and an angel called Aziraphale team up to teach the Antichrist (again, not the same one from Supernatural) both good and evil, hoping that giving the child a balanced upbringing will cause nurture to prevail over nature, thereby saving the earth from destruction.

We even see hints of this cosmic duality in NBC’s The Good Place, which, while not directly calling out Christianity, still proposes that we got “it” wrong and that whether we go to “the good place” or “the bad place” is determined by our actions on Earth, not by the grace of God.

Of course, the biggest problem with these shows suggesting that the world operates on a balance of good and evil rather than good triumphing over evil is that they twist the key message of the very theology that they derive their storylines from.

They undermine the sacrifice of Christ (if they even mention Him at all) by stating He was only a man, much like Muslims believe He was just a prophet. They further undermine God’s authority by portraying Him as an uncaring ruler who created the world and is happy to sit by and watch it go up in flames. And we are not saved, as these shows would suggest, by a loving and benevolent Lord, but by our own perseverance to do good and balance out the cosmic chaos of the universe.

Truth be told, I could probably write a book on this topic. But I’ll wrap it up with this: The irony of a show that will use biblical lore—angels, demons, even the Antichrist—without ever talking about the basis of Christianity, Jesus Christ himself, is something to be considered. It almost seems as if shows like Supernatural avoid mentioning the Messiah because they want the characters they created to be the messiahs, not some supernatural force. (It’s almost like they know that Jesus has already won the battle, and inserting Him into the storyline would make the ending too obvious.)

So, as we head into the Christmas season, where goodwill towards men is encouraged even by non-believers, let us remember the reason for the season. It’s not about the good works we do to help balance out the chaos of the universe. It’s about the grace of a Savior who, no matter what Hollywood says to the contrary, is the Light of the world and triumphs over evil rather than balancing it out.