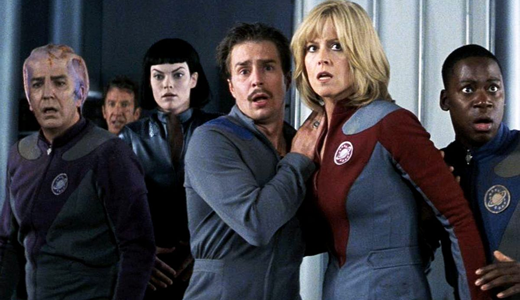 We all know about July 4th and its explosive celebrations, but did you also know that July 8th is International Town Criers Day? Or have you heard that July 17th is World Emoji Day? Let’s not forget the 27th: aka, Take Your Houseplants for a Walk Day. (A big favorite with nature-lovers everywhere.) And, of course, July 20th through 28th is National Moth Week. (A favorite time for, pretty much, nobody.) And that’s only the tip of the holiday iceberg.

July, then, could be a busy month for holiday lovers. While you’re filling your summer vacation days with emojis, houseplants and moths, however, you also may want to cool your heels from time to time in front of your screen of choice. Don’t worry, we can help you with that, especially when it comes to reporting on what’s family friendly and streaming.

The Karate Kid (PG, 1984): A teen named Daniel moves to Southern California with his mom and quickly finds himself the target of a group of bullies who study karate at a local dojo. But fortunately, Daniel befriends Mr. Miyagi, an unassuming repairman who just happens to be a martial arts master. Let the wax on, wax off begin. There’s some thumping and bumping and a dash of language in the mix, but lots of classic life lessons, too.

Stuart Little (PG, 1999): The Littles go to an orphanage to adopt a new family member and bring home … a charming little mouse named Stuart. You can’t get more little than this newest Little. And some of his new family members aren’t as welcoming as they could be. But Stuart works to fit in with as much pluck, love and courage as he can muster. There’s some light language and a bit of potty humor here, but as our Bob Waliszewski said, “It’s one family friendly world.”

Kung Fu Panda (PG, 2008): Po the chubby panda works in his family’s noodle shop and dreams of becoming a kung-fu master. Those outlandish dreams may become a reality when he’s unexpectedly called upon to fulfill an ancient prophecy and study the skills with his idols, the Furious Five. As I mentioned in my review, I was surprised by how good the pic ended up being. “I found a colorful garden where I half expected a bog. Lush watercolor visuals and fun characters instead of flat animation and bland storytelling,” I reported.

Fat Albert(PG, 2004): Supersized animated teen Fat Albert launches himself out of his TV cartoon domain and into the live-action world. There he helps others in need, but he has to turn to his creator, Bill Cosby, for advice. Putting feelings aside about the real-world Cosby’s issues, this is a fun film with simple, broadly themed lessons. Our Steve Isaac praised it for its encouragements to “Be kind. Play nice—even in high school. Do unto others as you would have them do unto you. Believe in yourself. Have good clean fun.”

Julie & Julia (PG-13, 2009): New Yorker Julie Powell is stuck in a soul-killing job and decides to add some spice to her life by preparing all 524 recipes in Julia Childs’ landmark cookbook, Mastering the Art of French Cooking. OK, this particular movie night recipe will be a bit too bland or salty for younger tastes. “It comes in the form of imprudent language, mostly, but also in a few too many boring third-act details about cookbook publishing and blogging fatigue,” I stated in my review. But as a Mom-and-Dad movie date, it might have all the right flavors. Meryl Streep and Amy Adams are both completely delicious in their rolls, er, roles.

Ramona & Beezus (G, 2010): Ramona Quimby is a plucky youngster with a boundless imagination and an irrepressible sense of fun and mischief. And that combo keeps her big sister, Beezus, on her toes as the two girls work together to save the day. I called it a “funny and endearing” pic.

Big Fish (PG-13, 2003): Desperate to know his complicated father before it’s too late, a young man sets out on a journey to unravel fact from fiction in the man’s wild stories. This film is broad and fantasy filled. Plugged In reviewer Steve Isaac made mention of a few small language and visual problems in this Tim Burton-helmed fable. But he also had this to say: “Fanciful, funny and sweet on marriage and family, this Fish only has a few sharp bones to note.”

Galaxy Quest (PG, 1999): The cast of a Star Trek-like 1970’s sci-fi show is now scraping a living through re-runs and sci-fi conventions.  But a group of space aliens—thinking the show was a historical document—turn to the actors for help in their quest to overcome an oppressive regime in their solar system. Bob Smithouser praised the rollicking show for “championing courage, teamwork and friendship through adversity.”

Ice Age (PG, 2002): Set against the onslaught of the ice age, this story revolves around three unforgettable characters: a wooly mammoth loner named Manny, a hungry saber-toothed tiger named Diego, and a jabbering, oddball sloth named Sid. This trio of very unlikely friends must come to terms with each other and find a way to return a lost and helpless human baby to its tribe. Our Bob Smithouser suggested that some of the rollicking Looney Tunes-like peril here might be a bit unsettling for kids under 7. But for all others, he stated that this animated pic has nice themes of friendship and self-sacrifice and that it “benefits from clever writing, delightfully wacky voice work … and some of the wildest action and slapstick possible without an anvil and a ‘That’s all folks!’”

Superhero fans will likely want to check out this next pic, streaming on Disney+ premium access, coming July 9th.

Black Widow (PG-13, 2021): Natasha Romanoff, aka Black Widow, confronts the darker parts of her past. And that includes secrets about her family and her history as a dastardly assassin.  This action pic has the language issues of a typical superhero movie, and of course the thumping violence you would expect. But our Paul Asay had some pretty nice things to say about this highly anticipated flick. “The MCU has always praised the ideal of family and its many manifestations, even as it reminds us how prickly real families can be,” Asay said. “Black Widow takes these themes to another level. Sure, we expected a movie about a couple of highly trained killers would be exciting. We didn’t expect it to be so sweet.”