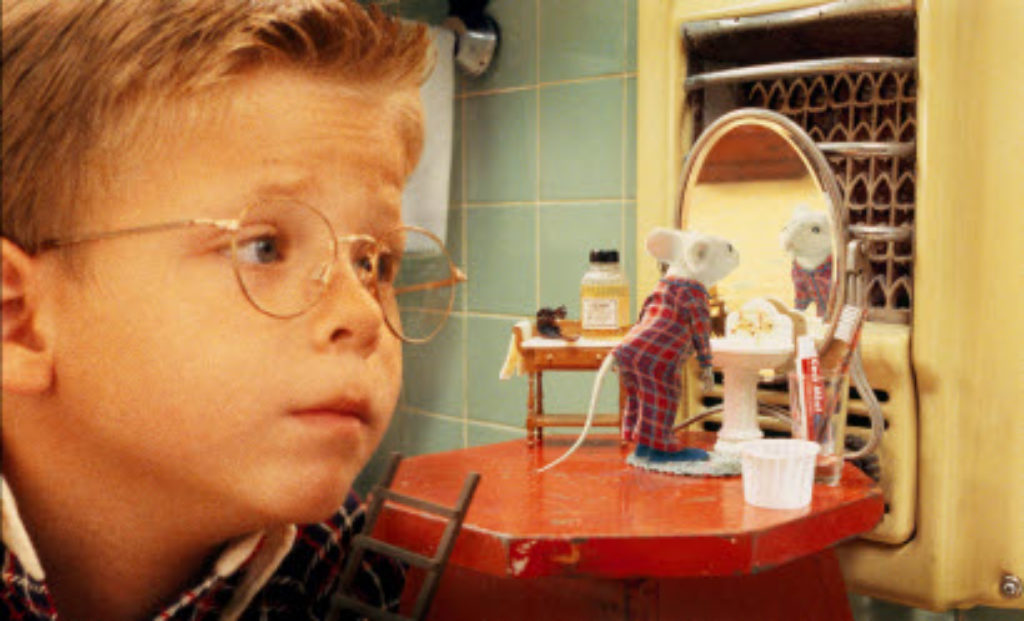 Wanting to expand their family to more than just only child George, Mr. and Mrs. Little head to a New York City orphanage to adopt. Overwhelmed by the many boys and girls needing homes, the couple receives advice from a three-inch talking mouse (in this film, a talking mouse is perfectly natural) who’s waiting for adoption too. The couple, however, becomes captivated with Stuart and takes him home, much to the chagrin of Snowbell the cat (who tries to swallow him) and their son (who ignores him because of his disappointment in not getting a new brother). But when George enters his remote-control boat in a race, Stuart personally has to captain the boat when Stuart’s clumsiness causes the remote to get broken. By the end of the competition, Stuart has won over his new “brother.”

But, alas, all is not well when two mice show up on the front step of the Little home claiming to be Stuart’s real parents. Stuart goes with them to his new home until eventually he discovers the ruse (set up by Snowbell and his alley cat friends). Meanwhile, the Littles also discover the truth and begin distributing fliers seeking their lost “son.” After a harrowing trip back to the Littles’, Stuart is informed by Snowbell that he is no longer wanted. Dejected, Stuart heads to Central Park where he faces a life and death struggle once again with the cats. Can Stuart outwit the cats? Will he learn the truth? Will he ever see the Littles again?

Positive Elements: The Little family is strong, compassionate and caring. Even the extended family, aunts, uncles, etc., are good-hearted people. And more surprising, Snowbell eventually comes around, risking his reputation and his life to save Stuart (after trying to get rid of him).

Violent Content: George gets in a brawl with a bully at the boat race and has to be pulled off by his father (who fortunately rebukes his son). Snowbell and his alley cat friends attempt to do Stuart in, but in the end the cats (except Snowbell) become the victims (of a fall into a lake—no one is hurt). Stuart has a close call when he accidentally gets put into the washing machine with a load of clothes. One mouse kidnapper slaps the other.

Crude or Profane Language: This is the reason why this flick received a PG rating instead of a G. Four minor profanities (“d–n,” “h-ll”) spoil what would have been a nearly perfect film otherwise.

Other Negative Elements: George has a bit of an attitude problem when he finds his “brother” isn’t human. At one point, he pouts and slams the door. Cats with flatulence are played for laughs.

Summary: Rumored to have cost more than $100 million to make, Stuart Little, based on the book by E.B. White, combines computer animation with live action. And it’s one family friendly world. While it’s disappointing Columbia Pictures went after the PG rating, the film as a whole really shines. This is one little that deserves to go really big.