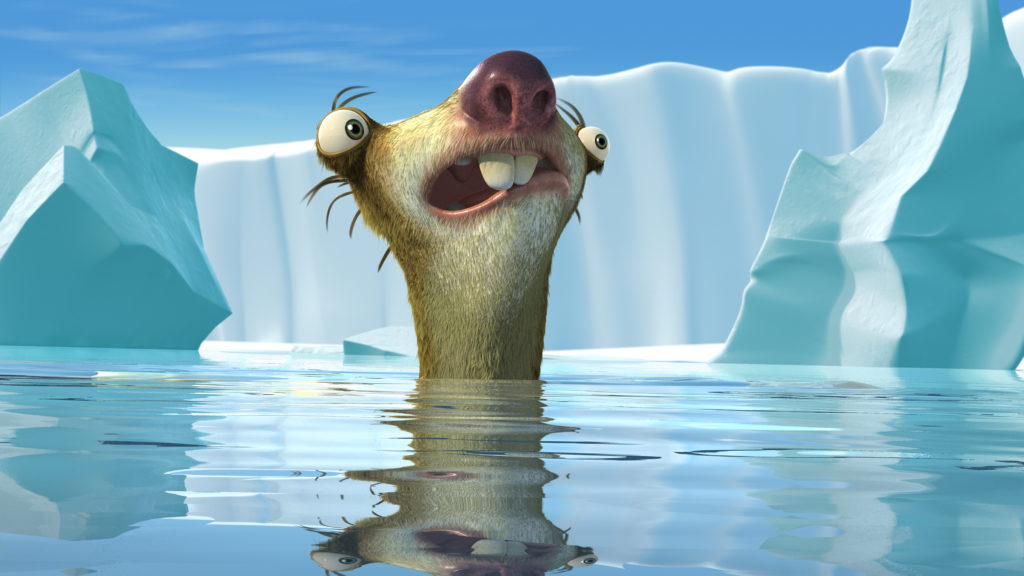 With winter’s fury bearing down, a colorful convoy of prehistoric creatures begins migrating south. A human tribe prepares to break camp as well, but before they get the chance they’re attacked by vengeful saber-toothed tigers bent on snatching their baby. It seems Soto, the leader of the pack, wants to eat the tiny morsel. The natives grab spears and try to fight off the beasts, but can’t stop one cat named Diego from cornering mother and child atop a raging waterfall. The desperate woman jumps. Soto orders Diego to retrieve the infant before returning to the group. Mom somehow survives the fall and, before she disappears beneath the frigid water, hands off her little bundle to a woolly mammoth (Manny, a disgruntled loner) and a sloth named Sid (a lazy, jabbering social outcast with a knack for finding trouble). Manny and Sid decide to return the baby to his herd, which first involves protecting him from that wily feline Diego, who shows up and convinces them that only his tracking skills will help them find the natives. The rest of Ice Age chronicles their perilous journey. There are plenty of thrills and spills as Sid and Manny strive to reunite the child with his family, while Diego executes a very different plan.

positive elements: Self-sacrifice is portrayed as loving and noble. A mother gives her life to save her baby. Manny risks his hide to save Diego, who later returns the favor. The film makes strong statements about assuming responsibility and sticking up for one another (“That’s what you do in a herd”). Manny, Sid and Diego begin their trek with indifference and/or antagonism toward each other, yet develop a close friendship by the end of the story. Manny rescues Sid from a pair of angry rhinos and takes a moral stand against “animals that kill for pleasure.” Diego realizes the value of true camaraderie and, forced to pick between his old and new friends, makes the right choice. A hyperactive squirrel pops in and out of the movie, undaunted in his quest to subdue an acorn. Manny tells Sid, “If you find a mate in life, you should be loyal.” Tender, occasionally sad moments reinforce the value of family. Struggling with bitterness, Manny learns to forgive those who have hurt him.

violent content: Saber-toothed tigers attack a village, ultimately leading to the drowning death of a young mother. The murder of a mammoth family by hunters is communicated through animated cave paintings. Soto gets impaled by sharp icicles that rain down on him (not actually shown). There’s a lot of slapstick in the tradition of Bugs Bunny cartoons. Characters get whacked in the head, stampeded, struck by lightning, stomped by much larger animals, etc. Dodo birds are all but driven to extinction in a battle over a watermelon (some fall off a cliff, while it’s implied that others burn up in a steaming crater). There are also verbal threats, such as when the rhinos tell Sid, “We’re gonna break your neck so you don’t feel a thing.” Soto talks about wanting to eat the baby, and his hench-cats discuss how they intend to subdue, filet and devour Manny.

crude or profane language: No profanity. Animals talk about performing a “poop check” on the baby.

other negative elements: Subtle references to evolution pop up a couple times. There’s a lot of “family tragedy” which parents of younger children may not wish to wade through (Sid is abandoned by his clan; others cope with death). Sid steps in a fresh mound of dung, then slaps it in the face of a rhino while trying to wipe it off his paw. A reportedly messy diaper hits Manny on the snout (it turns out to be empty).

conclusion: It would appear that the computer-animation whizzes at Pixar (Toy Story, A Bug’s Life, Monster’s Inc.) now have some bona fide competition. Blue Sky Studios created Ice Age, an imaginative romp set 20,000 years in the past that’s alternately touching and laugh-out-loud funny. Also, it looks really sharp! Any movie hoping to capture an audience’s imagination these days has to deliver a seamless visual treat. Ice Age does so with impressive computer graphics. Sure, the glacial landscape is much more stark than virtual environments in Toy Story or Shrek, but this wintry outdoor setting posed its own challenges, which Blue Sky meets with style. Just seeing a rain-soaked sloth or watching characters interact with the snow is worth the price of admission. Ice Age also benefits from clever writing, delightfully wacky voice work by John Leguizamo, and some of the wildest action and slapstick possible without an anvil and a “That’s all folks!”

However, parents may find it a bit too intense for children under the age of seven or eight who may be bothered by frightening conflict, sad moments, death or anti-social, Looney Tunes-style humor. And the prospect of a precious 3-D baby boy being eaten alive by a slobbering carnivore makes Sher Khan’s pursuit of Mowgli in The Jungle Book seem almost playful by comparison. These elements and a little “poop humor” no doubt cost Ice Age its G rating. Of course, the above cautions have been detailed primarily for parents of preschoolers. There’s nothing that should give preteens, teens or adults cold chills when entering this Ice Age.