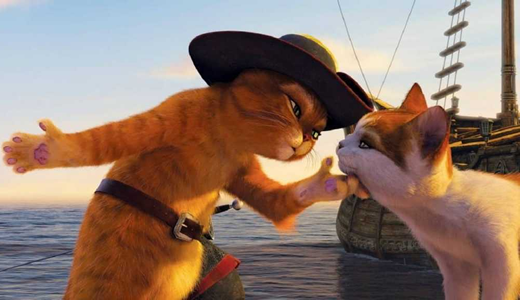 Well, Labor Day has come and gone, gang. My, how the social-distancing time has flown. But they’re starting to open theaters and offer up some good movies once again.

If, however, you’re still a bit hesitant to take the family past that hermetically sealed front door, or you simply aren’t interested in anything out in theaters (or want to pony up $30 for Mulan), there are ten family friendly pics streaming this month that we here at Plugged In can point you to.

Just in case you didn’t pony up the cash to stream that new Trolls movie back in the locked-down days of April, let’s start there.

Trolls World Tour (PG, 2020): The rainbow-hued singing Trolls discover that they are but one of six different Troll tribes devoted to six different kinds of music: Funk, Country, Techno, Classical, Pop and Rock. Their musical world is about to get a whole lot louder. Our Emily Clark summed up this sparkly kid’s pic like this: “Trolls World Tour comes with a few bumps and scrapes along the way, but this glittery sequel ultimately teaches a valuable lesson about loving and accepting people who are different. We don’t always have to agree with each other, the movie says. But that doesn’t mean we can’t respect each other’s differences—because those differences are what make us all unique.”

Oh, and while you’re on Hulu, you might want to bounce on over to another fav.

Hoosiers (PG, 1986): A failed college coach gets a chance at redemption when he is hired by an Indiana high school to head up the basketball program. After the team’s star player quits to focus on his long-neglected studies, the coach struggles to develop a winning team in the face of community criticism for his temper and his unconventional choice of assistant coach. “Experience terrific courtside drama with Hoosiers, a winner that scores big with very few fouls,” said Plugged In’s Bob Smithouser.

Now let’s check out some goodies streaming on …

Back to the Future (PG, 1985): High schooler Marty McFly is accidentally whisked back to the days when his parents were just awkward teens in school themselves. And he interferes with their budding romance. Oops! Now he and an eccentric scientist have got to figure out how to get the couple back together before Marty’s own future evaporates. This is a wonderfully fun time travel movie packed with quirky characters, nostalgic hijinks and a dash of rock-‘n-roll—but it does come with a few PG problems.

The Muppets (PG, 2011): A rich Texas oil magnate has a nefarious plan to raze the Muppet Theater and drill for the oil there. It’s up to Kermit, Fozzie, Ms. Piggy and the gang to stage The Greatest Muppet Telethon Ever and raise the $10 million needed to save the theater. There’s a bit of eyebrow-raising humor in the mix. But our Paul Asay suggests that those puppety pals “dream and hope and believe like mad. And in so doing, they give us permission to do the same.”

Puss in Boots (PG, 2011): A notorious fighter, lover and outlaw cat becomes a hero when he sets off on an adventure with a vivacious señorita/thief named Kitty Softpaws and the mastermind Humpty Dumpty to save his town. This might quickly bring to mind a certain green guy named Shrek. But Puss is less gassy for sure. And as I said in my review: “Puss in Boots also gives families a character-driven, intelligently conceived story that practically dares us all to earn our own pair of boots for our own acts of heroism and efforts to do the right thing.”

Close Encounters of the Third Kind (PG, 1977): This Steven Spielberg-helmed classic is an epic science fiction adventure about a disparate group of people who keep seeing UFOs and are drawn together to contact that alien intelligence. There’s a little light language in amidst the sci-fi happenings. But this pic is funny and exciting and an underrated masterpiece.

OK, so let’s wrap up our at-home streaming list with a couple newer flicks the family can enjoy and a pair of old classics, too.

Spies in Disguise (PG, 2019): Super spy Lance Sterling and geeky scientist Walter Beckett cross paths when the science nerd accidentally turns his hero into … a pigeon! Now they must work together if they want a slim feather’s chance of saving the world from some evil plans. Well, you know how messy pigeons can be, so you can expect plenty of potty humor in this kiddy film mix. But as I said in my review, “the movie’s friendship and self-sacrifice-promoting decoder signals counterbalance its gratuitous guffaws.” And this is a rare spy pic that declares “you should make more friends than enemies, and that you can definitely deal with your adversaries without resorting to violence.”

Over The Hedge (PG, 2006): A mischievous con-artist raccoon named R.J. and a sensitive turtle named Verne team up to deal with a suburban housing development that’s encroaching on their forest home. Like many kid-focused pics before it, this one does contain a smattering of mild crudity and potty humor. But as Plugged In’s Marcus Yoars noted, it also factors in “several sweet messages about family and loyalty and features great onscreen textures that will likely have tots reaching out to pet the furries.”

Father of the Bride (G, 1950): This Oscar nominated classic, starring Spencer Tracy and Elizabeth Taylor, focuses on love and marriage and all the craziness that surrounds a big wedding. It’s a star-studded, old fashioned father-daughter comedy.

Little Women (NR, 1949) This is one of the first movie renditions of Louisa May Alcott’s tale of those vivacious March sisters. This one stars the likes of June Allyson, Peter Lawford, Elizabeth Taylor and Janet Leigh. It’s a black and white classic well worth grabbing a seat and a tissue or two for.