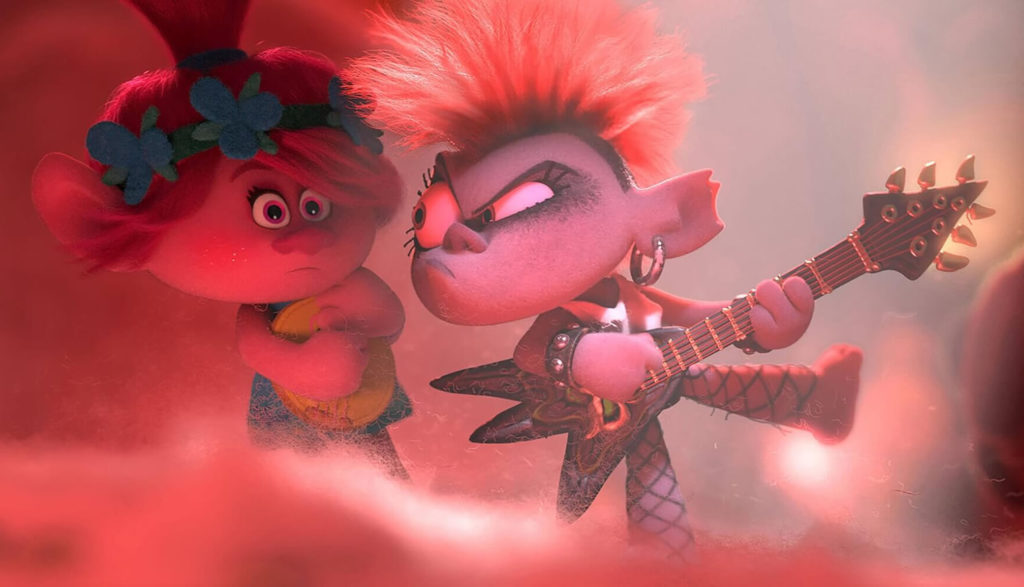 Poppy loves being queen, and everyone tells her she’s doing a fantastic job. But her whole world is turned upside down when she receives an invitation from a neighboring kingdom.

Turns out that the residents of Pop Village aren’t the only trolls out there. In fact, there are actually six troll kingdoms, each specializing in its own brand of music: Pop, Hard Rock, Country, Funk, Classical and Techno. And Queen Barb of the Hard Rock Trolls wants to unite them all.

Poppy’s dad, the former King Peppy, warns her not to accept Barb’s invitation. He tells her that the reason trolls split up to begin with was because they were too different to get along. And if Barb tries to bring them all together, he fears the fighting will start back up again—and Branch agrees.

So she and Branch (who reluctantly joins the diplomatic mission to protect Poppy from what he believes to be a trap) set out for Rock nation with the magical string that controls all pop music, determined to join Barb in creating the perfect harmony between all trolls.

Unfortunately, the pair quickly learns that Poppy’s dad was right. Barb does indeed want to create one nation of trolls—under rock. She and her fellow headbangers have attacked several of the other troll territories; stolen their magical, musical strings; and taken their residents hostage. Poppy has always believed that the only weapons she needs are hugs and kindness. But how is she gonna hug her way out of this one?

Poppy is determined to be a good queen—so determined that she makes a pinky promise (which is so powerful it creates a magical outburst when made) to protect her friends and family from Barb and the Rock Trolls. She struggles to carry this burden and eventually learns that Barb feels the same pressure as a queen.

But unlike Barb, Poppy realizes that she has friends who are not only willing to defend her but to stand up to her when she’s making a mistake. She admits those mistakes and learns that being a good queen isn’t just about making hard decisions but about listening to the advice of those around her.

The trolls eventually discover the importance of respecting differences, since that’s what makes everyone special and unique. They learn that music comes from within—from their experiences, lives and culture—and that to deny those things is to deny who they are. So living in harmony means listening to other opinions, even if you don’t agree, because it makes you stronger as a whole.

Courage is celebrated throughout the film. Poppy’s friend, Cooper, sets out on his own to find his real family, even though he’s scared. A flute from the Classical Troll nation decides to rebuild her home, even though she’s alone. And Poppy’s dad commends his daughter for being brave enough to believe that things could change, even when the odds were stacked against her.

Branch risks his life to save Poppy. He also refrains from saying, “I told you so,” when she doesn’t listen to him. Cooper helps his friends escape from Barb while staying behind to fend her off. Poppy’s friend, Biggie, abandons her when things start going south; but he eventually feels ashamed, knowing Poppy never would have left him, and he rallies their friends to rescue her.

A family celebrates when their long-lost son returns home. Trolls emphasize the importance of family, love and music. A character admits that hatred is exhausting.

The trolls’ music is magical, and they use it to bring joy and color to their otherwise bland world. But that magical music can also be used to unleash destruction and chaos. Barb demonstrates that when she uses music to create “zombies” (really just hypnotized trolls).

While giving a history lesson, Poppy’s dad says, “In the beginning,” a verbal nod toward Genesis 1:1. A troll turns into a ghost after dying. When a character almost drowns, he has a vision of rising into heaven and meeting a god of sorts. God’s name is mentioned (but not misused) in song lyrics.

Branch and Poppy dance romantically, hug and hold hands. While singing and dancing, some trolls wiggle and slap their rear ends. A troll’s backside is partially visible after he accidentally splits his pants. Some male trolls are shirtless, and one has heart-shaped chest hair. Poppy showers herself in sparkles and is seen covered in sparkly bubbles before she puts on her clothes. Troll babies are hatched from eggs that pop out of their parents’ hair, and baby is born from a male troll.

Barb and her rocker trolls attack the other Troll nations, using their music to create lightning-like lasers that knock down their victims and destroy their homes. A flute survives one of these attacks and is later seen bruised and coughing up smoke.

Branch gets bitten on the leg by a toothy, centaur-like troll. Other trolls push and kick each other in a scuffle. Someone gets hit in the face by a book. We hear about an avalanche falling on some trolls. Poppy reminds Branch that violence never solves problems after she finds his hidden stash of weapons.

A troll keels over into a coffin and presumably dies.

There are a few uses of “darn” and “dang.” Poppy cries out “Sugar!” in anger. Someone says, “You suck!” Poppy is called a “pipsqueak.” A character exclaims, “Balls!” when he arrives late to a party; after being scolded, he explains he’s referring to the cheese balls he made for the party.

Poppy and Branch are served juice in fancy glasses that are usually used for alcoholic beverages.

Barb’s goal truly is to end all fighting by uniting the trolls. However, her methods leave much to be desired. Rather than respecting different styles of music, she scoffs at them and tries to eliminate them. She takes joy in her domination and mocks Poppy for her determination to be friends, burning a card that Poppy sent to her.

Barb and the Rock Trolls are not the only ones intolerant of different types of music. Poppy learns that the Pop Trolls’ ancestors were the original ones who tried to take over the world by stealing the musical strings. When she and her friends try to unite the trolls from other musical genres, they are imprisoned, chased and taken hostage.

When Poppy’s dad wants to run and hide from Barb, Poppy scolds him for assuming the worst in someone he’s never met. However, her optimism also puts Poppy and her friends in danger. She trusts strangers despite Branch’s skepticism, and eventually hurts his feelings by her refusal to listen to him.

Cooper learns that he didn’t grow up with his real family because he was kidnapped when he was still an egg. Characters sometimes lie.

There is some mild toilet humor. One scene involves a troll defecating out a cake. Another troll gets interrupted while he is using the bathroom. A troll pricks her finger on a needle, and another faints when he sees the trickle of her sparkly blood. Someone collapses from dehydration. Another character jumps into lava but is later shown to be unaffected. The Hard Rock Trolls stylize their clothes and homes with skulls.

Being queen is a tough job. It’s not just about hugs and sparkles and rainbows (although there’s plenty of that). It’s about ensuring the safety of your citizens and listening to the advice of people who want to help you do a better job.

It takes Poppy some time to put her own stubbornness aside in order to figure this out. But once she does, she finally hears what her friends have been saying all along: that it’s OK to be different. “Music should bring us together, not divide us!” she says. And with the support of her friends, Poppy’s able to share this newfound wisdom with other troll rulers and unite them all.

Trolls World Tour comes with a few bumps and scrapes along the way, but this glittery sequel ultimately teaches a valuable lesson about loving and accepting people who are different. We don’t always have to agree with each other, the movie says. But that doesn’t mean we can’t respect each other’s differences—because those differences are what make us all unique.