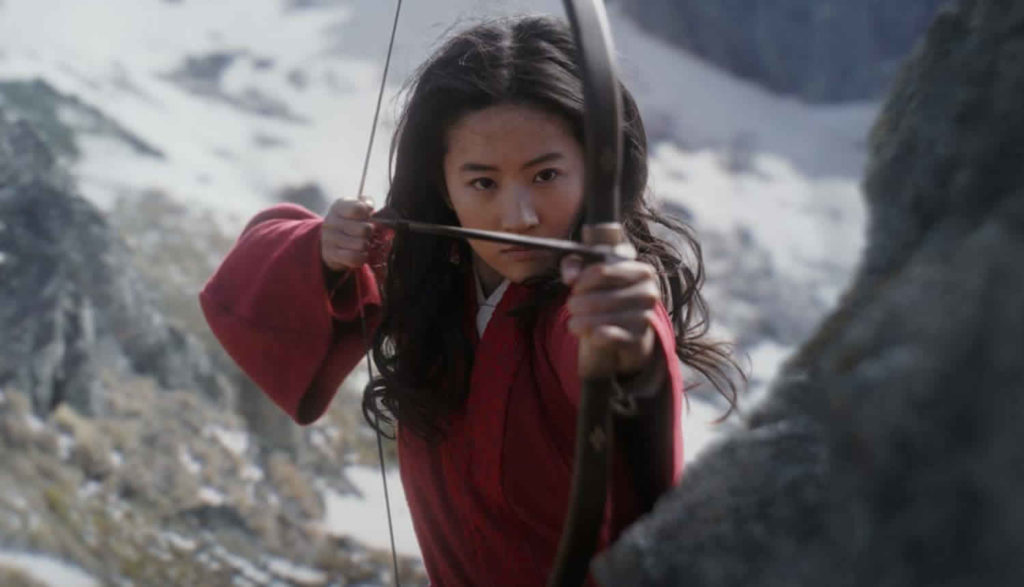 Anyone in China in the fifth century will tell you that chi pervades the universe. They say that it’s the boundless energy of life itself and everyone is born with it. But only the most earnest and true will connect deeply with that chi. Only then can he become a great warrior and bring honor to his family.

I say he, because everyone in that era will also tell you that while everyone can connect to chi, not everyone should. Chi is for warriors, not for rambunctious daughters. A daughter brings honor to her family by making a good marriage, being a good wife.

That fact, however, is lost on Mulan. Hua Zhou, her father, actually encouraged her martial arts practice when she was just a small girl. He saw her great chi energy, and since he had no son, Zhou couldn’t help but work with her and praise her for her skills, even while prompting her to keep them under wraps.

After years of practice, Mulan loved nothing so much as her athletic battle skills and abundant chi. There was no man on earth who could mean anything to her or compare to that: except perhaps her beloved father.

Then, however, a fated day arrived. Messengers from the Empire rode into the Hua family’s small province, declaring that an army of Rouran Mongols were threatening the kingdom. The emperor had declared that a great Chinese army should be raised and each family must put forth one man per household.

Mulan’s father was once a great warrior. However, he’s old now and nearly crippled. But for the honor of his family and his nation, Hua Zhou hobbled forward to accept the conscription scroll.

Zhou did not ride out the next day with scroll in hand, though. His daughter snuck behind his back, bound her chest, donned his armor, stole his horse and rode out in his stead. She would be Hua Jun, the son her father never had but sorely needed at this moment. She would go to war and spare the man she so loved.

If discovered, her great deceit will bring dishonor to her family. But it is a risk she must take.

Repeatedly, Mulan’s family members tell her to “remember her place” as a woman and daughter. But the film illustrates that women can be far more than simply a good match for a husband. They can be leaders and, yes, even warriors. The song “Reflection” is the only tune brought over from the animated original film (played out in both English and Chinese during the credits). And it supports the above idea, lyrically asking, “Must there be a secret me I’m forced to hide?”

All of that said, Mulan honors marriage and family, too. A commander states that loyalty, bravery and truth are the three pillars of virtue in society. And later, because of Mulan’s choices, the emperor declares that devotion to family is yet another essential virtue. Mulan’s father expresses the importance of his love for her and even when she points out that it would have been better if he had a son instead of her, Zhou retorts, “I would change nothing about my life!” And later, after Mulan apologizes for some of the choices she made, he again tells her of his unfettered love and his past blindness to her true abilities. “One warrior knows another. You were always there, yet I see you for the first time.”

The spiritual life energy called chi is spoken of quite a bit here,  and we see it manifest itself in people through superpower-like abilities. It lets Mulan and others perform seemingly impossible leaping and twirling stunts during battle: flipping on horseback, running up walls and over rooftops, kicking and firing weapons with their feet and even snatching arrows out of the air.

That chi energy is also turned to the dark side by a woman named Xianniang, who uses it to take over the form of several different individuals, turn into a hawk and transform herself into a huge flock of swooping and attacking birds. She’s part of the Rouran invaders, but even they look upon her supernatural abilities as something closer to witchcraft than a positive use of chi.

Hua Zhou also talks about communing with the spirits of his ancestors on numerous occasions. He states that a phoenix is an ancestral guardian who watches over their family, praying that it would protect Mulan. And we see such a fiery-plumed bird lead Mulan in the right direction on several occasions.

When Mulan arrives at a camp with fellow soldiers, she walks into a tent to find a number of young men disrobing for a shower and blanches when one of them drops his towel. (We see bare chests and legs but everything else is kept from the camera’s eye.) She then repeatedly volunteers for guard duty to avoid joining the shower detail.

Later, however, after being told how badly she smells, Mulan goes to bathe in a nearby pond. She disrobes and we she her bare figure from the rear (key parts obscured by tree branches and flower petals). One of her fellow soldiers follows her and strips down too (the camera cutting away as he drops his underwear).

Mulan also wears a large leather girdle of sorts to cover her chest and other feminine curves. Mulan does such a good job portraying a young man that the commander even suggests introducing her/him to his daughter after the war. We see a few indications that she is attracted to one of the other young men in her group. They touch hands at one point after she reveals that she is indeed a woman.

There’s nothing bloody or up-close and messy here, but this is a story about soldiers in war. So, we see lots of slashing swords and pikes, shot arrows and many thrown shurikens that strike home and protrude from wounded or dead bodies. Men on horseback ride screaming through crowds of foot soldiers.

Crowds of men clash and slash at one another. Arrows rain down, knocking men from horseback. A catapult launches several huge flaming stone projectiles in the direction of men on an open field. One strikes a group of soldiers holding up their shields for protection and obliterates them in an explosion of fire. A projectile also explodes on a mountain side, causing a snowy avalanche that envelopes scores and scores of running men.

One dark, smoky scene after a battle shows a large stack of empty armor representing the many that had been massacred. Mulan is thumped and pummeled about in various battles and put in situations that seem dire. She’s hit in the chest by a powerfully thrown shuriken and left for dead (her leather girdle saves her). As a young girl she slips off a rooftop, but uses her athletic abilities to repel safely to the ground.

The enemy leader Böri Khan is heavily scarred from many battles. We see him with his shirt off, and massive patches of scar tissue crisscrosses his upper body. Mulan’s father has a badly wounded knee from past battles and while trying to walk without his cane, he crumples to the ground in pain. Xianniang uses shuriken, pikes and a set of long sharp claws to attack and rip at foes. She snaps a pike over someone’s shoulders, giving the impression and sound of snapping the man’s neck. Böri Khan declares that he will leave a tied-up prisoner to burn to death in a flaming building (though the man escapes).

Some jibes about how badly someone smells.

The original Disney animated version of Mulan was something of a cinematic call for girls and women to find their voice, even if that voice was at odds with the world around them. It stated that the traits of honor, strength and leadership were every bit as woven into the fabric of a woman as they were of a man.

This live-action version amps up that female-focused declaration while also pumping up the fantasy side of the tale with chi-driven magic and gravity-defying martial arts choreography. The result is a film that’s both dazzling and engaging. It’s a pic filled with color, beautiful production, a strong leading actress and a thoughtful tale.

However, if you’re going in hoping for a soaring musical fantasy featuring a wise-cracking little dragon sidekick—if you’re hoping for gales of laughter or bouts of tears—well, you’ll probably leave a bit disappointed. This is more wuxia battle adventure than anything winking and whimsical.

And then there’s the violent side of that flip-in-your-saddle-while-shooting-three-arrows equation. Whereas the animated pic just hinted at deadly massacres, we actually see sword- and arrow-piercing ferocity and fallen fighters lying dead on the ground. It’s all kept bloodless and for the most part at a distance, but those live-action conflicts could still be a bit intense for young fans of the late ‘90s Mulan.

Like Lion King, Aladdin and Jungle Book before it, turning a beloved Disney animated musical into a flesh-and-blood adventure changes things: sometimes to fabulous effect, and sometimes in ways you wish it hadn’t.