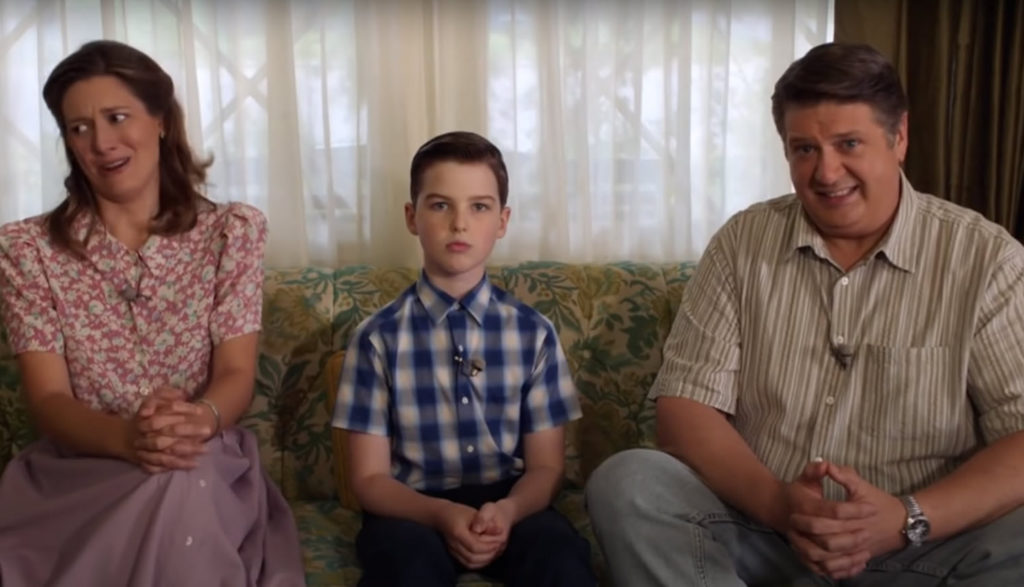 All of us were kids once. Even us geniuses.

Granted, Sheldon’s growing up pretty fast in some respects. He may be years away from puberty, but he’s now in college—driving his professors crazy, embarrassing his older brother, and giving his mom and pops plenty to worry about. Which, I guess, makes him sound like a normal adolescent.

But it’s the ways in which Sheldon causes all this worry, insanity and embarrassment that makes him a little different. His super-powered cerebrum has been paired with a bevy of neuroses and an utterly miniscule understanding of people—and that can make Sheldon seem very young indeed.

We know from the Big Bang that the kid did, somehow, make it to semi-functional adulthood. But just how many lockers was he stuffed into along the way?

It’s not easy being the smartest kid around. But if you think Sheldon has it tough, well, he makes it pretty difficult on the people around him, too.

The cash-strapped Coopers would’ve liked to have sent their son to a private school that could cater to Sheldon’s über-powered passion for knowledge. But they didn’t have the money. So Mary and George Cooper—the latter a coach for the high school football team—spent most of Sheldon’s high school career—and now into college—worrying about their young genius.

It doesn’t help when Sheldon calls out his fellow students for dress-code infractions or questions his instructors’ teaching qualifications. Back when Sheldon was in high school, the Cooper parents were called into the principal’s office so often that they might as well have had reserved seats.

Young Sheldon creator Chuck Lorre is known for making crass, traditional comedies, from Two and a Half Men to 2 Broke Girls. The Big Bang Theory is his branchild, too—a kinder, gentler Lorre comedy that still can sometimes be quite problematic.

But Young Sheldon marks a departure for Lorre in a couple of significant ways.

First, the comedy is a one-camera show that doesn’t have a laugh track. That gives it a far different feel than the two-camera, setup-punchline-laughter template of Big Bang Theory (or any Lorre’s other programs).

Second, the show can be strangely sweet, and even sincere. Sure, it’s no This Is Us or Parenthood. Still, we see how much Sheldon really cares for his parents, and how much they, in turn, care for him—even if they don’t always show that affection in the best of ways.

Moreover, Mary—arguably the show’s most sympathetic character—is a Christian. It’s not often you see such a multi-layered character who believes in God on TV these days. And even though young Sheldon has already departed from the faith, he still loves and respects his mother. He even volunteers to go to church with her.

“Why are you going?” Sheldon’s twin sister, Missy, asks. “You don’t believe in God.”

“But I believe in Mom,” Sheldon responds.

That said, in some other, more unfortunate respects, Young Sheldon follows the Chuck Lorre template a little too closely.

Language can be profane. And while certainly the show’s main characters don’t sleep around, references to sex and sensuality show up from time to time. Religion, despite Mary’s faith, can take a beating. Finally, though the Coopers are ultimately a loving family, the dynamics in play therein are hardly the stuff that any thinking familial unit would want to emulate.

With Young Sheldon, Chuck Lorre seems to be growing up a bit. But like his youthful protagonist, he still has a ways to go.

Though just 11 years old, Sheldon is set to not only graduate from high school, but to be the school’s valedictorian, too. But while Sheldon knows that his brain will do just fine in college, he’s not so sure about the rest of himself.

He frets about how to schedule his classes around needed bathroom breaks. Most college students have “fully grown bladders,” he explains to his mother. “Mine is child-sized.” When he can’t find his safety goggles for science, he frets about using the ones provided by the school—worrying about eyebrow lice. (He barges into the principal’s office as the principal talks with an apparently newly pregnant student, bellowing “nothing’s more important than protection!” The female student bursts into fresh tears.)

Meanwhile, Sheldon’s Meemaw, Connie, and her gruff beau, Dale, patch things up after a fight, with Dale promising to mend his ways. At a Mexican restaurant, he passes on both margaritas and beer, preferring water. “I don’t do my best thinking when I’ve been drinking,” he says. (Connie eventually orders and drinks a margarita herself.)

Dale asks Connie if she goes to church. “Yeah, when I’m not hung over,” she says. Dale suggests that religion might do him good, and he says he’d like to come with her sometimes. Dale also shows interest in a Bible study that Sheldon’s mother leads, and he suggests that the family pray together during a graduation party.

We learn that Sheldon aced high school P.E. after snitching on kids smoking behind the equipment shed. “I don’t have to buy cigarettes for a year,” the principal says. Sheldon’s parents speculate about whether their other children, Georgie and Missy, might be in line to go to prison or get prematurely pregnant. When Sheldon learns that his best friend in high school, Tam, is eating with the school jazz band now, he says, “I’m glad I knew you before you became a heroin addict.” Someone eats a lunch dessert without permission. We hear how Connie and Georgie egged Dale’s store. Characters say “a–” and “b–tard,” once apiece.

Sheldon’s older brother, Georgie, has a crush on a girl named Veronica, who comes to stay with the Coopers for a spell. Meanwhile, Sheldon’s grandmother, Meemaw, goes out to dinner with her beau, Dr. John Sturgis, where the good doctor pops an unexpected—and unwanted—question.

Veronica has moved in with the Coopers because her mom’s new boyfriend has a drinking problem and is, it’s suggested, abusive. When said boyfriend comes to take Veronica back home, Sheldon’s dad, George, steps in: We hear, but don’t see, George punch the guy. He comes into the kitchen with bloody knuckles and tells Mary to call the police because of the “bum sleeping on our front porch.”

We also hear more details about Veronica’s home life: Her birth father left the family when Veronica was very tiny and she’s never heard from him since. Also, a meal around the Cooper dinner table (complete with family prayer) feels wonderfully unusual for Veronica, who admits she never eats at the table with her family.

Faith makes several appearances in this episode. Veronica pours out her heart to another character at a church. And when Georgie vacates his room for Veronica, he hangs up a popsicle cross above the bed—a gesture that makes Veronica cry. Mary also scolds Meemaw for not wanting to marry Dr. Sturgis, given that they’re sleeping together. “You shouldn’t be sleeping with someone you’re not married to,” she says.

And indeed, Meemaw and Dr. Sturgis are sleeping together. In fact, the doctor says that their lovemaking has become “very efficient.” Georgie, meanwhile, removes several girlie magazines from of his room from various hiding places before Veronica moves in. (They feature buxom, scantily clad women on the covers.) Missy, Sheldon’s sister, goes out for some girl-time with Veronica, and she wears makeup for the occasion—even though her mom has forbidden she wear any until she’s 16. “This is as hot as I get,” the little girl tells Veronica. Veronica dreams about kissing Georgie.

Nine-year-old Sheldon Cooper heads off to high school, imagining it to be a haven for higher learning. He’s quickly disabused of that notion: Stepping out of the boys’ bathroom, Sheldon turns to his mother and says, “Well, that was revolting.” But if the first day of school is hard on Sheldon, it’s no picnic for Sheldon’s family—or his teachers—either.

The Coopers pray at the dinner table while holding hands (though Sheldon wears mittens to prevent him from coming into contact with germy fingers). Sheldon’s Christian mother, Mary, prays elsewhere, too (“Lord look after my son, don’t let him get stuffed in a gym bag”), and she takes him and his twin sister, Missy, to church, where they listen to a sermon on “impure thoughts.” Sheldon begins talking during the sermon, explaining that since he hasn’t hit puberty, “I just don’t think this part applies to me.” He calls Mary his own “Christian soldier,” and when Missy accuses Mom of lying, Sheldon defends her. “Mom doesn’t lie,” he says. “Sure, she thinks the Earth was made in six days, but that’s because she’s gullible, not a liar.” Sheldon apparently has a low regard for Oral Roberts University as well.

Sheldon notices a pregnant teen at school. There’s a reference to “dirty magazines.” We hear lots of discussion about when Sheldon’s testicles are due to drop. Mary finds a pair of dirty underwear on a bookshelf. Sheldon tells one of his teachers that she sports a mustache, and he apparently suggests to another teacher that he’s violating the school’s hygiene standards. (When the adult complains to the principal, the principal tells the teacher that he probably should shower more often.)

Sheldon’s dad. George Sr., drinks a bottle of beer. Sheldon asks his dad if a sad moment from the man’s past prods him to drink as much as he does. When a music teacher realizes that Sheldon has perfect pitch, she suggests he study music. “No thank you,” he says. “Musicians take drugs.” George Jr. fights with someone during a football practice. Mary threatens to beat up a church congregant for insulting her son. Sheldon lobs a few insults at his siblings. We hear “a–” and “h—” three times each, along with singular uses of “b–ch” and “d–n.”