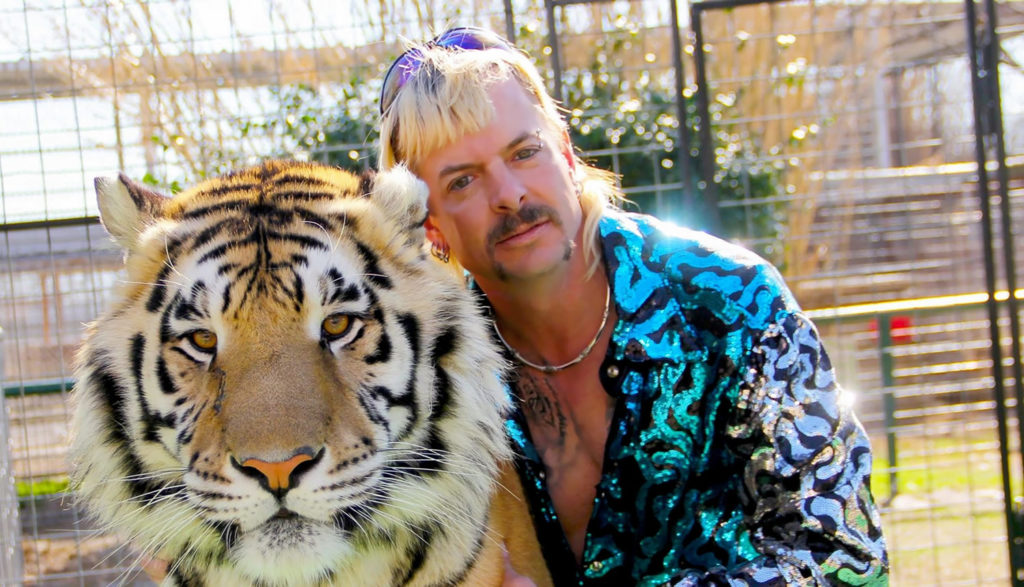 When director and conservationist Eric Goode started filming this series, he was actually investigating a notorious reptile dealer in Florida. What he found was a not-so-secret society of big cat conservationists and collectors in America.

To these people, lions, tigers, panthers, leopards and other big cats are just pets. “The only difference between my pet and your pet is mine have 3-inch teeth and they weigh 400 pounds,” says the show’s star, Joe Exotic.

And although Tiger King aims to raise awareness about the mistreatment of animals owned by private zoos and sanctuaries, its instant popularity has more to do with the eccentricity of its characters, including a former cocaine drug lord, a swinger who uses tiger cubs to attract women, a Hollywood animal trainer, and a potential murderess.

‘Not Your Average Joe‘

Goode steps onto the battlefield of a decades-long feud between Joe and Carole Baskin, owner of Big Cat Rescue in Florida. Carole claims that Joe’s practice of charging park visitors to pet lion and tiger cubs is abusive and that he only breeds the big cats for profit. Joe says that Carole’s a hypocrite: She’s making money off tigers, too, just under a different name.

The two go back and forth bashing each other online. Carole creates websites calling Joe an animal abuser and gets PETA on his tail. Joe promotes the conspiracy theory that Carole murdered her husband, Don Lewis, who mysteriously disappeared over 20 years ago, and fed him to her own big cats.

All these events culminate when Carole sues Joe for trademark infringement and wins the $1 million lawsuit.

Already suffering from some personal losses (one of his husbands had tragically taken his own life and Joe had also lost in his campaign to be governor), this financial setback pushes Joe over the edge. And after years of making threats on Carole’s life and encouraging others to take her out, Joe hires someone to kill her—hoping to take out his nemesis once and for all … and he gets caught.

This Isn’t Calvin and Hobbes

Tiger King is ten gallons of crazy in a five-gallon bucket. Coercion, perjury, animal cruelty, libel and slander permeate every episode. F-bombs and misuses of God’s name are frequent. And between the swinging couples and Joe’s polyandrous nature, I’ve heard far more about these big cat-lovers’ relationships than I ever cared to hear.

But the saddest part of this show is that nobody wins—especially the animals. Anyone sensitive to animal cruelty would do better to watch just about anything else, because these big cats are kept in cages and live under extreme conditions. There are some instances in which animals attack their zookeepers (one woman actually loses her arm). And in one case, we see the corpses of multiple animals after they escape their own private zoo, and  local law enforcers are forced to put them down to keep the public safe.

Joe was sentenced to 22 years in prison and lost everything as a result; but as one of his former employees puts it: “Not a single animal benefitted from this war.”

A title card in the credits states that 5,000-10,000 tigers live in captivity in America, but only 4,000 live in the wild. Another former employee wonders how much better off the tigers would have been if the money spent on lawsuits and marketing and upkeeping these private zoos had been spent on preserving them in their natural habitats.

Perhaps the one saving grace of Tiger King is that by the end, several of the people who worked for Joe Exotic seem to have realized how badly they messed up. But it can all be narrowed down to a simple statement from the first episode: “Don’t own big, dangerous, exotic animals.”

Some critics have said that you have to see this show to believe it—and yes, the story feels unbelievable. But just as Carole Baskin might say about Joe Exotic’s own zoo, it’s not the healthiest thing to see, either.

Audiences are introduced to Joe Exotic, the gun-toting operator of an Oklahoma big cat park serving time in prison for hiring someone to murder his competition.

Joe carries a loaded gun and threatens to shoot anyone who plans to separate him from his animals. Two men make a suicide pact. Joe practices shooting on his property and causes several small explosions using dynamite. A stunt double is set on fire and jumps through a glass window.

Several animal carcasses are torn apart and fed to the big cats. Some animals attacks their keepers. We hear gunshots and see multiple dead animals after police are forced to gun them down after their owner purposely set them loose on the public. The topic of animal abuse also comes up throughout the episode and animals are seen in cages that their owners admit are inhumane. We also see animals dragged around on leashes and cubs exploited for money.

Joe sells sex lubricant and lingerie in his gift shop. He repeatedly calls his big cats “sexy.” He and his husband strike loving poses for a photoshoot. We see pictures of women wearing body paint and lingerie in campaigns for the People for the Ethical Treatment of Animals. A man does his interview shirtless. We see pictures of a shirtless man posing with big cats. People talk about using pictures with tigers to “get laid” on dating apps. A couple kisses. A man and woman hug.

Joe says that his father asked him not to come to his funeral after finding out that Joe was gay. He admits that he drove his car off a bridge in an attempt to take his own life after that.

Someone smokes a cigarette. Joe is called a drug-addict, but he also speaks against drugs and alcohol at school assemblies following the death of his brother at the hands of a drunk driver.

We hear the f-word and s-word multiple times, as well as “p-ss,” “b–ch,” “a–” and “h—.” There are also several misuses of God’s and Jesus’ names. Someone jokes about urination. People insult one another. Joe calls his deceased brother an angel.