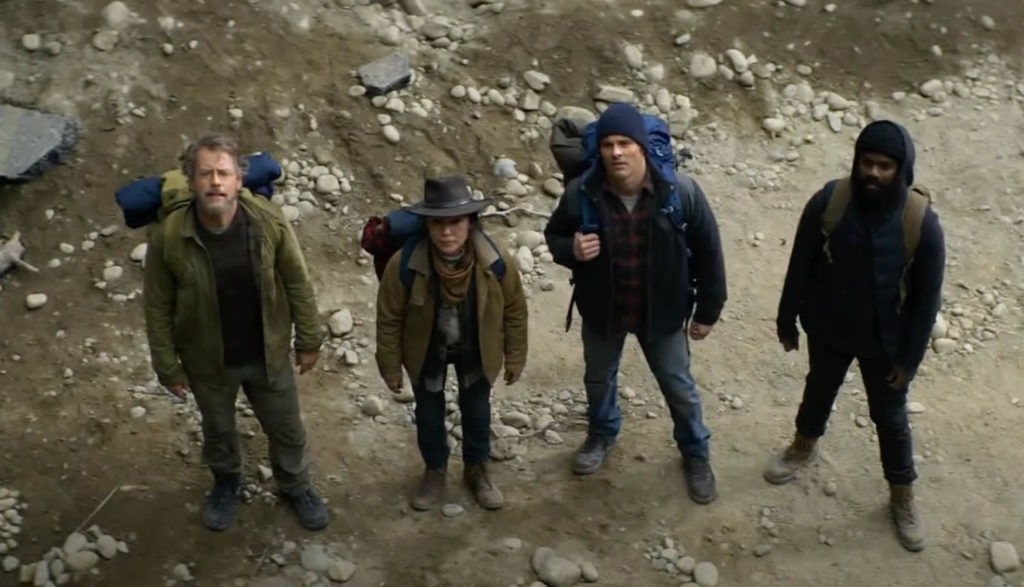 The end of the world never looked so phlegmy.

Forget the zombies. Forget the giant meteors. Here, the apocalypse comes with a cough and a wheeze. The flu-like disease, called “Captain Trips” by the masses, tears across the planet like a disgusting tsunami, consuming everyone in its congested path. One day you have a little tickle in your throat. The next, you’re dead—and probably no one’s alive to bury you. It’s the mother of all pandemics—one so terrible to make the Black Death look mild by comparison. Once you get it, you have no hope. Most of the world’s people—99% of them—succumb to the disease.

Oh, did we mention that that’s where this story begins?

While Captain Trips is 100% lethal if you catch it, a tiny sliver of humanity never gets the disease at all. No one knows why: Few are alive to investigate. And, let’s face it: by the time Trips burns through humanity, everyone left has other things to worry about.

Restarting civilization seems just the start, really. That’s just what Harold Lauder had in mind when he and his former babysitter/longtime crush Frannie Goldsmith left Maine for Atlanta. Just weeks before the cataclysm, if Harold asked Fran out, she might’ve well said “not if you were the last man on earth.” Well, now, with nearly 4 billion men out of the picture, Harold feels like his odds have improved.

But he’s not the only guy with an XY chromosome out there. Many others remain, including ex-soldier Stu. When patient zero (Charlie Campion) literally ran into a gas station as sick as can be, Stu was there to haul the guy out of the car and call the ambulance. Everyone else at the station died a horrible death. But Stu? Never even sneezed. He was hauled off to a series of super-secret research centers, but all the folks in those places died, too.

And here’s the thing: Stu, Frannie, Harold and many other survivors find themselves being pulled to new population hubs. Some are visited, in dreams or visions, by an ancient woman in a cornfield named Mother Abigail, who tells them to find her in Colorado. Others are pulled in a darker direction—to Las Vegas, baby—by the enigmatic Randall Flagg.

This is no mere reboot of civilization afoot here: This is a climactic showdown between good and evil, where the winners get to set the template for a new world.

The Stand is considered by many to be the magnum opus of terror titan Stephen King. Originally published in 1978, the book ran a staggering 823 pages—actually edited down from King’s original 1,152. (You can now buy the uncut edition, too.) It was a harrowing but strangely spiritual book: Mother Abigail insists that God’s at work in this post-apocalyptic world, while Flagg is King’s favorite demon incarnate. And while King has never been a model of Christian heterodoxy (even a bad model), some of the broad-brush themes can feel … kinda Christian-esque?

That spirituality, with its ever-so-slight Christian tinge, carries over to this CBS All Access miniseries. But so, of course, do many of King’s less-savory issues.

A good seven-to-eight billion people die in the opening episode, and the population cull is far from over. This is, at its core, a war story, complete with casualties—and many a person with murder on the mind survives to cause his or her own form of havoc, as well.

While sex hasn’t played a huge part in the miniseries’ early going, the original book featured plenty: It’d be hardly surprising to find that element make its way to the screen, as well. And then, of course, you’ve got the language to deal with: You don’t hear enough f-words to make Martin Scorsese blush, but you can count on them being used 20-30 times on any given episode.The Stand pits good versus evil in a winner-take-all, post-apocalyptic showdown. The miniseries itself isn’t quite so black and white. But let’s be honest: When you look at its problematic content, Flagg himself might approve.

Most of the episode is told in flashback, as the superflu (called “Captain Trips” by some) obliterates humanity. But in the midst of this apocalypse, creepy Peeping Tom Harold Lauder sees some positives: All the people who bullied him are gone now. And the only woman left in his small Maine hometown? Frannie, whom he’s crushed on for years. Meanwhile in Vermont, another survivor named Stu makes his own getaway from a secret government facility—facilitated by a dying four-star general.

We see countless dead and dying victims, and we’re given plenty of visual evidence for what a horrible end they suffer. The disease acts like a killer cold: Corpses’ necks are often grotesquely swollen and disfigured (apparently from the phlegm gathering inside), and the faces of many of its victims are covered in their own mucus. One sick doctor brandishes a scalpel as an alternative out. “Painful, all right, but it seems smarter than choking to death on my own snot,” he says. Others do commit suicide, though. One apparently shoots himself while doing a radio show (we hear the gun blast and then silence), while another shoots himself in the chest. A woman tries to commit suicide by taking countless pills, but she’s saved before she expires.

Someone else dies by a gunshot wound, too, while another person has his throat cut. Harold, spying a patrol car with a dead officer inside, opens the door and steals the officer’s gun. Dozens of corpses are bulldozed into mass graves. A woman drags her father’s body down the stairs to bury it in her back yard. A man plows into a gas station with his car, slamming into a concrete poll. A teen crashes his bike, cutting and scratching his face and body pretty badly. Dead people are shown, sitting in church, with maggots crawling across their faces.

We hear and see spiritual references elsewhere, too. In an opening monologue, a woman talks about the impending battle between good and evil and tells her unseen listeners that “this is what God wants of you.” A cross hangs in a dead man’s bedroom. We learn that Randall Flagg—a soon-to-be-leader of the miniseries’ Las Vegas colony—has a supernatural element to him, and he was instrumental in helping release the disease.

Before the disease starts its march, Harold is caught peeping at Frannie through a hole in the fence. He’s attacked by two guys, one of whom refers to him as that “psycho school-shooter kid.” (Harold insists that the story that got him expelled from school was a work of fiction.) “You’re gonna die a virgin, Lauder … especially after I post these on Instagram,” one of Harold’s assailants says, referring to pictures he took of Harold peeping. We hear someone talk about how good the movie Risky Business was—because, he suggests, of a graphic sex scene.

Several people vomit. People also smoke. A game of poker is interrupted by a crashing car. Government officials appear to keep dangerous secrets. Characters say the f-word more than 25 times and the s-word about another 10. We also hear “a–,” “b–ch,” “d–n,” “h—” and “pr–k.” God’s name is misused twice, once with the word “d–n.” Jesus’ name is abused about seven times.