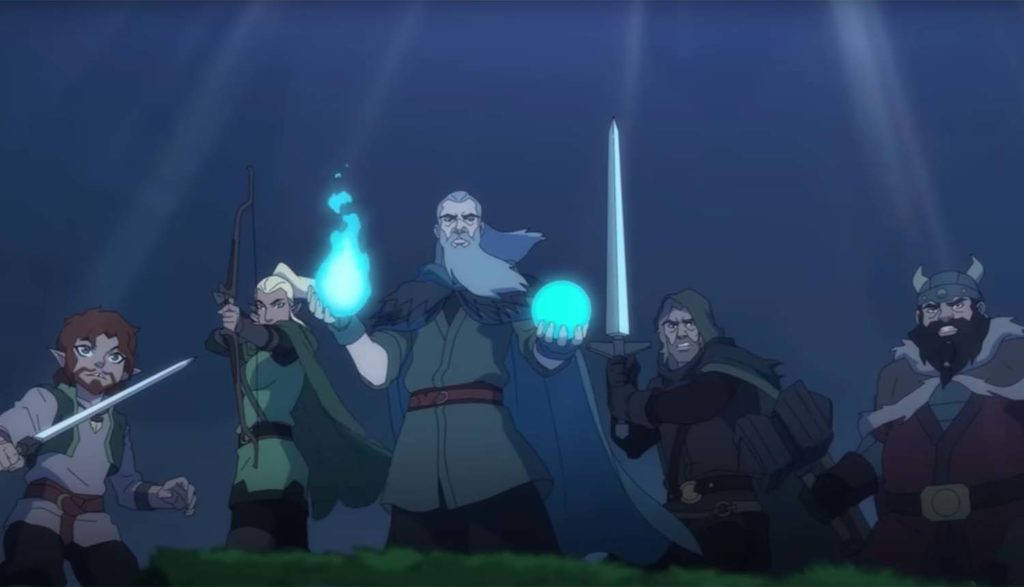 Tal’Dorei seems a nice enough place. Well, except for the dragons. And vampires. And necromancers.

Still, the sun shines more often than not, and the realm is guarded by the adventuring crew Vox Machina, who keep the place safe … ish.

But who, pray tell, is going to guard Tal’Dorei from Vox Machina?

Vox Machina is made up of seven brave adventurers—eight, if you count Trinket, the armored bear.

Half-elf twins Vex and Vax might be as close as you get to the group’s leaders—though the randy bard gnome Scanlan Shorthalt would surely disagree. Grog Strongjaw is the gray-skinned barbarian muscle of the group, while Keyleth casts nature spells between minor panic attacks. Another gnome, Pike, is ready with a bit of healing magic when the blood starts to flow out of unexpected orifices. Percy, the bespectacled noble with an actual firearm at the ready, tries to encourage a hint of decorum from the rest—but it’s clearly a losing battle.

Indeed, the crew members fight with each other almost as much as they do with monsters. And considering Tal’Dorei has more monsters than the U.S. has Starbucks outlets, that’s saying something.

But still, they’re pretty good at hacking those monsters to bits should the need arise, which is why Sovereign Uriel lets them hang around. Why, he’s so desperate to keep them close, he’s given them their own actual keep! Ha ha!

Not that they keep to their keep very much. Scanlan spends his spare time in brothels and boudoirs, wooing maidens with his songs (and sometimes, with a radiant codpiece). Pike and Grog like losing themselves in a pint of ale. (Or gallon. Or barrel. Maybe two.) Percy enjoys brooding a lot, and Vax might flirt with a same-sex conquest.

Scanlan styles Vox Machina as “champions of justice, hunters of dragons [and] destroyers of chastity,” and at least two of those three descriptors seem fair enough. Because while Tal’Dorei is ever so slightly safer from monsters with the team around, the septemvirate might just be pulling down the realm’s moral quotient all by itself.

In Latin, Vox Machina means “voice machine,” which would seem like a strange choice for a name in a world where machines are significantly rarer than leprechauns. But it makes sense in the real world, where Vox Machina began adventuring not in Tal’Dorei, but on the game-streaming site Twitch.

Voice actors Liam O’Brien and Sam Riegel convened Vox Machina’s first inaugural adventure as just an informal gathering of voice-actor friends in late 2012, where they sat around and played Dungeons & Dragons. They all apparently enjoyed it so much that it became a pretty regular thing. Then, in 2015, the Geek & Sundry Twitch channel started streaming their gameplay under the title Critical Role. The first campaign, featuring the adventuring squad Vox Machina, ran for 115 episodes, and a Kickstarter campaign sought to raise $750,000 for a 22-minute animated special. It raised more than $4 million—and the eyebrows of Amazon Prime—instead.

Amazon Prime’s animated take on the series is a little more streamlined than Critical Role’s three-to-six-hour-per-episode runtime. But what it lacks in duration, it makes up for in unwanted content.

Granted, the voice actors participating in the original Critical Role campaigns are not ones to curb their tongues. The f- and s-words we’d be exposed to on Twitch and YouTube are dutifully ported into the animated show. And if you don’t hear quite as many on Amazon, it’s only because each episode is less than 30 minutes long.

But in other areas, the content is far worse. Remember, Critical Role is really just a bunch of people playing a fantasy role-playing game: All of them, to my knowledge, are fully clothed in every episode, and few hurtle weapons and/or magic at each other.

On Amazon, both monsters and people are constantly being terminated by the gravest and goopiest of means. Animated limbs fly. Animated heads roll. Animated bodies get stomped into jelly, accompanied by troughs of animated blood.

And then there’s the sexual dalliances. While they have next to nothing to do with the story, they still take up quite a bit of screen time.

Unfortunately, The Legend of Vox Machina is one of those shows that could quietly catch families unawares. The animation looks akin to Avatar: The Last Airbender. The idea of seven adventurers protecting a land from monstrous nemeses could be at home in many a YA book or four-quadrant movie. Even if you watched the first few minutes of the first episode, you might think it was a fun, aspirational, even family-friendly cartoon.

But then, when someone’s bloodily crushed by a hurtled rock, and our heroes start shouting f-words, you know you’re in for a very different ride.

The Legend of Vox Machina had quite an improbable ride to get to where it is today—the equivalent of rolling triple sixes for all your D&D character traits. But when it comes to being suitable for families, Vox Machina failed its saving throw. And it lost the dice under the washing machine.

Out of coin and out of options, the adventuring team of Vox Machina agrees to a dangerous job for the realm of Tal’Dorei. There, an unknown monster is on the loose and slaughtering its residents. But Vex detects that someone on the kingdom’s inner council might actually be working with the beast.

Several people are killed in fairly horrific ways. For example, one gets crushed by a rock (with blood flying); another’s head is sliced like a watermelon (pieces of his still-screaming face fly toward the camera), and children die in pools of their own blood. Someone urinates on another character’s shoes.

Pike, the team’s cleric, worships the goddess Sarenrae and bears a magic amulet that aids in her healing abilities. Other characters can cast magic, as well. She heals a gaping, bloody, rib-filled wound that one of her teammates suffers. Characters say the f-word 20 times and the s-word four. “B–ch,” “h—” and “b–locks” are also uttered, along with obscene terms referencing both male and female bits of anatomy.

Knowing they’re up against a blue dragon now, the members of Vox Machina try to figure out how to kill the thing. While Vax tries to use his manly wiles on a male, makeup-wearing shopkeeper, others follow a suspicious royal advisor—and discover a lethal secret.

Vax and the shopkeeper clearly have a history. “I’ve missed your visits,” the bearded shopkeeper tells him as he kisses both of Vax’s cheeks. And when Vax pays him a pittance for some information, the shopkeeper makes some double entendres about its size. Vax promises him a dinner if they survive. “You owe me more than that, you handsome half-elf,” the shopkeeper says as they exchange winks.

The team uncovers a secret panel behind a mostly-nude portrait of what might be a red elf or demon. (We see her exposed posterior, and one adventurer marvels at his ability to reach right through the portrait’s exposed buttocks.)

People are incinerated by dragon breath (screaming as their skin chars and crumbles) or are sliced to bits by its claws. A couple of victims get caught by the dragon and dropped, smashing graphically onto the ground below. A fight leaves several adventurers bloodied, and a monster clearly and grotesquely dead. (One adventurer removes a tooth from the deceased beast.) Someone smashes his fist through another person’s chest. A brandished tree obliterates a bandit. A head is bludgeoned straight through by the stump of a tree branch.

When the adventuring band discovers a dragon’s horde, the cleric Pike says it’s enough to be “drunk for weeks!” “Days, even!” the not-so-bright Grog says. (Earlier, he drank a great deal of alcohol straight from a barrel.) We see magical items and magic spells cast.

The f-word is used 12 times and the s-word another eight. We also hear “a–,” “d–n,” “h—” and three misuses of God’s name, twice with the word “d–n.” Other vulgarities include crass phrases and obscene words that refer to flatulence, excrement, bestiality and several anatomical parts.

In flashback, Percy recalls how his entire family was slaughtered in front of his eyes when he was a child. In present day, he discovers that his family’s killers—Lord Silas and Lady Delilah Briarwood—are guests of honor at Sovereign Uriel’s lavish banquet. When Vax sneaks into the couple’s room to uncover some explanation about what they’re doing there, things go predictably bad.

The show pulls no punches in the flashback massacre. A woman who looks to be Percy’s grandmother gets skewered in the throat by two knives. His mother is riddled with arrows as she tries to flee. Other family members lie in their blood. Later, he and others engage in a bloody fight with the couple—one of whom is clearly a vampire, while the other seems to be a dark magic user. People are shot and sliced (repeatedly). One man has his fingers blown off. A vampire sinks his teeth into somebody’s neck, and he seems to have the power to hypnotize as well.

Scanlon, an oversexed gnome bard, comes to dinner wearing a rainbow-colored codpiece and sings a wildly obscene song about a certain sex toy. (He mentions said toy in conversation as well.) There’s talk about “safe words.” A couple of adventurers make a game out of hitting each other’s crotch. Scanlon mistakes someone asking him where “the privy” is as a sexual come-on.

Several magic spells are cast. When the cleric Pike seems trapped, someone tells her that her gods can’t save her. When served champagne at a fancy dinner, barbarian Grog gripes that they’re not nearly big enough to get drunk on. (Pike suggests they should be quaffed like shots; they down them quickly and smash the glasses on the floor.)

Characters say (or sing) the f-word about eight times, several in conjunction with the word “mother”. We also hear the s-word three times, “a–,” “b–ch,” “h—” and the British profanity “bloody.”