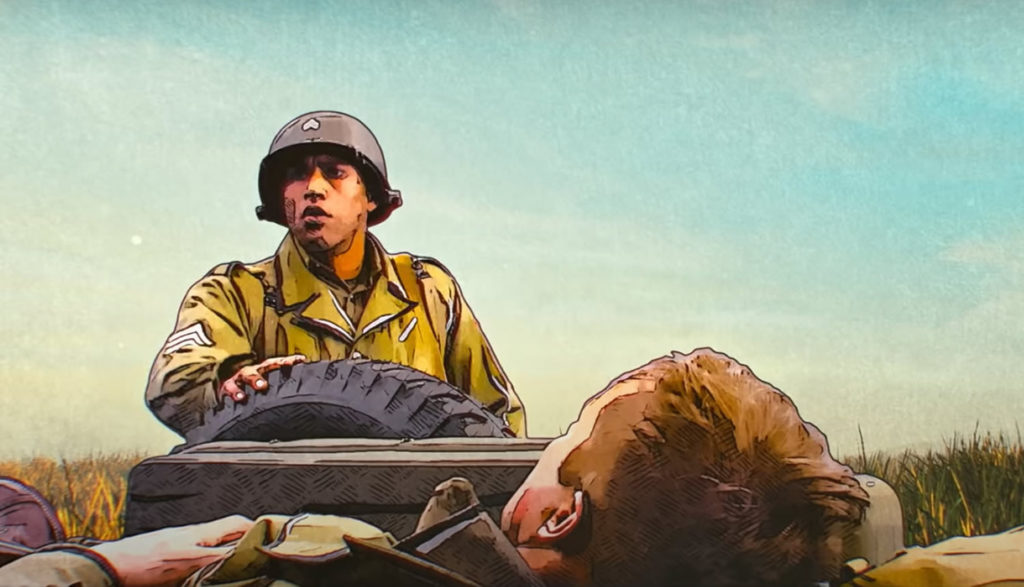 Most every kid played “Cowboys and Indians” in the 1940s, firing off imaginary six-shooters and hollering out war whoops. Neighborhood battles between the two groups would leave many a kid sprawled on the grass—pretending to be dead but breathing hard and smiling.

Across the Atlantic, in a tattered European theater still teeming with Nazis, some cowboys and Indians were fighting for real. But these men—members of the 157th Infantry Regiment, and part of the fabled Thunderbirds—fought on the same side. And if one fell, it was for real, too.

According to The Liberator, the third battalion of the 157th saw its beginnings not in basic training, but in jail. That’s where Capt. Felix Sparks found most of them: Company J, they were called. Some were Latinos, others were Native Americans, and the remainder were a smattering of farmers and ranchers from the American West. As was all too common at the time, they were segregated, even in the holding cells. When Sparks asked why, the corporal had a quick answer.

“The Indians and the Mexicans don’t like each other very much,” he said. “And they hate us more.”

But Sparks has never paid much attention to the shade of a soldier’s skin. He cares about results, and he quickly molds this motley band of hostile outsiders into one of the U.S. Army’s most fearsome fighting forces. And when the 157th lands in Europe in 1943, it quickly makes its presence known.

For 500 days, the regiment carves its way through Italy, France and finally Germany, where Sparks and his men eventually liberate the Dachau concentration camp. But the men aren’t just fighting Nazis: In an age in which Hispanics and Native Americans couldn’t even drink a beer in the same bar as their Caucasian friends, they’re fighting prejudice, too.

The Liberator, a Netflix miniseries based on Alex Kershaw’s book of the same name, is rooted in fact. Felix Sparks did indeed command the 157th Infantry Regiment’s third battalion, which was one of the only units in the U.S. Army to be so fully integrated. Some of the major characters, such as Corp. Able Gomez and Sgt. Samuel Coldfoot, are representative composites of the Native American and Mexican American soldiers who saw action. (Coldfoot’s name feels similar to that of Van Barfoot, a Choctaw sergeant who served in the 157th and won the Congressional Medal of Honor.)

Obviously, World War II has been the subject of countless movies and TV shows: The conflict seems designed to showcase both the brutality of war and the heroism that can be found in the midst of it. And in that respect, The Liberator is just one more entry of that grand tradition.

But it does set itself apart.

First, and most obviously, you notice how the show looks. It uses a hybrid-form of CGI animation, blending live-action performances with what feels like a hand-drawn graphic novel. It makes for a visually compelling and, at times, a more emotionally engaging series. It also mutes some of the blood and guts we might otherwise be exposed to in such a show. Sure, we still see plenty of carnage, but it seems the makers aren’t that interested in shocking us with the brutality of war as to really concentrate on the lives of the men fighting it.

But if it pulls back from the violence, The Liberator leans into these soldiers’ bad language. The miniseries is rated TV-MA, and the rating can be explained by its f-word count alone. You’ll also see plenty of cigarette-smoking and booze-quaffing, too. And while The Liberator stresses that the soldiers we follow are heroes, not everything they do is heroic. The Liberator offers an old-fashioned war story, sharing narrative DNA with Band of Brothers and Saving Private Ryan. But it shares many of the same problems, too. And that makes this battle zone a dangerous one to visit.

Sparks leads his men through war-torn Italy, losing some soldiers and meeting a young, terrified boy along the way. When Sparks gets wounded, it looks for all the world as if  he’s on his way back home and to his beloved wife, Mary. But instead, he opts to disobey his discharge orders and return to lead his men. In flashback, we see how those men—a diverse group of Mexican-Americans, Native Americans and white farmers and ranchers—came to be.

The men are in prison when Sparks takes command of them—locked up, we’re told, for everything from drunken and disorderly conduct, to assault and battery. Many of those assaults were apparently committed on Army officers. But the show suggests that those assaults might also stem from the racism these men experienced. “Maybe you were told you come from a race that has no business wearing this uniform,” Sparks tells them. “What matters to me is performance.”

A drill sergeant peppers Sparks’ men with a stream of profane, racist insults. When Sparks asks him to stop, the sergeant invites him to settle things behind a shed: “What goes on behind that shed stays behind that shed,” the sergeant tells him. Sparks takes that as an invitation to let one of his own men—an American Indian—exact some revenge on the sergeant for all the verbal abuse doled out. (The next time we see the sergeant, one of his arms is in a sling, and a superior officer commiserates with him about his “accident.”)

A few people are killed or injured in Italy: Some of them are graphically wounded by the shrapnel from exploding trees. Blood pools on the ground and in water. A tank is blown up. Someone is threatened at the barrel of a gun. At a hospital, Sparks is told that his own liver had been sliced open, and that only the quick action of his men had saved his life. A newly minted general greets Sparks with a leg missing. “In this war, getting promoted is easy,” the man tells Sparks. “The hard part is staying alive.”

The Italian boy is terrified that the American soldiers will cut off his testicles (as Fascist soldiers told him would happen). Sparks promises the boy that they’ll not harm him. “No man should have to walk around covering his privates,” he says. A man discusses the “beautiful breasts” of a female acquaintance  in America.

Signs in bar windows make it clear that “Indians” are unwelcome. (Samuel Coldfoot, itching for a fight, is about to head in anyway before Sparks stops him.) A soldier being grilled by a Nazi SS officer is confronted with his own country’s systematic racism. “You can’t even drink a beer at the same bar as your fellow soldier,” the Nazi tells him, insisting that the U.S. isn’t that different from Germany.

We hear a number of racial slurs, including the n-word. We also hear about eight f-words, seven s-words and other profanities such as “a–,” “d–n” and “h—.” Jesus’ name is abused four times. Two men drink in a bar.